We review the new drawing game Loony Quest from Asmodee Games. In this unique party game, players must draw lines, circles, and dots on a pieces of transparency and then check how they did at the end. 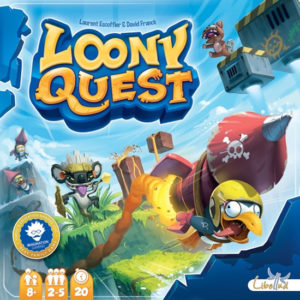 Imagine if the world of your old 8-bit (or 16-bit maybe) video games decided to have a baby with Pictionary. The curious offspring would have been Loony Quest. In this quick playing drawing game, players embark on a journey through the six stages of one of the game’s many worlds, eventually fighting the big boss at the end.

Don’t let the theme fool you though, this isn’t a side scrolling video game, or even a minis based dungeon crawl. Loony Quest is a party game that seeks to be accessible to all players. Loony Quest will test your cunning and also your depth perception as you search for victory points.

Loony Quest is a real time drawing game for 2-5 players that takes about 20 minutes to play. Loony Quest plays well at any player count.

Each player in Loony Quest is trying to earn as many points as possible as they travel through one of Arkadia’s 7 Worlds. Each game, players will choose one of the game’s worlds to travel through, which is broken down into 6 stages, with the final stage being a boss level of course.

During the game, players will be testing their depth perception and drawing skills as they try to navigate the hazards of their current level. Whoever can smartly draw paths throughout the levels will earn victory points, inching themselves closer to victory.

We all know Asmodee Games knows how to put together its products. So it should come as no surprise that Loony Quest just looks fantastic. The highlight of the game has to be the retro style artwork used for each of the stages. Drawn in the style of an old school, 2D “platformer” video game, the stages in Loony Quest are almost as much fun to look at as it is to play the game.

Moving on, the game also comes with a pile of tokens, dry erase markets, wipes, drawing boards, and transparencies to draw on. As an added bonus, the game even comes with a fold out poster that has an artistic “map” of the world on one side and a picture of each stage on the other. This actually reminded me a bit of the old fold-out maps that used to come with video games. So I’ve got to give props to Asmodee Games on another game with outstanding production values.

While there are a few pages of rules in Loony Quest, the game play is actually fairly easy. To begin the game, you choose which world you want to play for the game. Find the three world sheets and place stage one into the center of the game box.

Each player gets a drawing board, marker, and transparency. Players then check the stage to see what the rules are for this particular stage. Usually there are icons or creatures that a player wants to hit, while avoiding hazards and monsters.

There are three types of stages in Loony Quest:

While this may sound easy, the trick is that all drawing happens to the side of level sheet. So players will have to use their best judgement on where a line actually needs to go.

Players have 30 seconds to make their drawings. Once the time is up, players check how well they did. Each player will overlay their transparency on the drawing and check their score. Players will earn points for hitting the right objects, and lose points for hitting traps.

Players can also earn power up items by hitting the appropriate icons. These will give them special one-time use powers, including some ways to mess with their opponents. Conversely, if a player hits a bomb icon, they will get a penalty in the next round. These will make drawing a bit more challenging for the player.

Once each player’s score is tallied they move on to the next stage. Once players have finished the 6th and final stage the player with the most points wins.

I have to say, Loony Quest is unlike any game I have ever played. It certainly earns points for being both unique and creative. The amount of drawing games in my collection is limited to just a couple (Telestrations, Who What Where?), but they are all kind of the same. Try and draw something, have people laugh at how bad your drawing is.

Thankfully, Loony Quest gives a Tiger Punch to this drawing game rut and brings us a game that’s both fresh and a ton of fun to play. The idea of drawing on a transparency and then overlaying it see how well you did was just brilliant. While it may seem easy at first (especially with the first few levels), players will quickly realize that they aren’t as skilled as they thought.

The interesting thing is how engaged players becomes once you get to the resolution stage. Everyone at the table will want to see how your drawing ended up. Be it for the wow factor of a great drawing or the humor factor if someone royally screwed up (been there). The end result is a game that has almost no downtime. Since all the drawing happens in real time (30 second timer), you’re left with a game that’s keeping players engaged for its full run.

The game would have actually been good enough had they stopped there, but the designers decided to kick things up a notch with the addition of the bonus and penalty tokens. The main allure of the bonus tokens is they are ways you can not only protect yourself from hazards, but also mess with your opponents. For example, there is a banana token that you literally toss onto your opponents board and they have to draw around it in the next stage. Or the mosquito token that forces an opponent to balance it on their pen as they draw.

On the other side of the coin are the penalty tokens. These are all things that will make your next stage much harder. You might have to draw with your arms straight, or one eye closed, or even with your non-dominant hand. Both the bonus and penalty tokens succeed in injecting a bit more variety and humor into the game play, which helps keep it fresh.

If I had a complaint about Loony Quest, it would be that it might be a victim of its own success. It’s a ton of fun to play, but it’s also best served in small doses. I would suggest 1-2 games max of it in one session. It’s not a game that’s meant to be played for 60-90 minutes. The depth isn’t there and it will eventually wear out its welcome if you keep going.

However, as long as you don’t overindulge, players are rewarded with a unique and entertaining gaming experience. The other reason you don’t want to burn through the games of Loony Quest is that you will start to get bored of the same stage over and over. While testing this game out with different groups, I played the first world quite a bit. I’m a tad sick of it now and really don’t want to see that world again. Loony Quest is also a game that will really be served well with expansion packs, which I will be excited to acquire.

I don’t own very many (or any) games like Loony Quest and I’m really glad I stumbled across this one. To be honest, I might not have given it a second glance had I not known what it was about ahead of time. The pictures on the box can’t accurately portray just how clever and fun this game is. It’s wholly unique, accessible to just about everyone, and easily my new favorite drawing game.

Speaking of drawing games, I love that you don’t have to be a great artist to do well at this game. I always sucked at Pictionary because my freehand skills are terrible (despite having a B.F.A). So I loved right away that I could compete at a high level in Loony Quest.

If you are looking for that next great party game, or something you can play with just about anyone, gamer and non-gamer alike, than Loony Quest is worth a look. There isn’t anything else out there like it, and it’s sure to entertain just about anyone.

If you’d like to pick up a copy of Loony Quest, you can get it for about $30.

Final Score: 4 Stars – A great take on the drawing game genre that’s both unique and fun to play.

Misses:
• Possible to overindulge
• Will need expansions to stay fresh