We review London (Second Edition), a card game from Martin Wallace published by Osprey Games. In London, players are trying to rebuild the city after the great fire. London uses card play and engine building as its central mechanics. 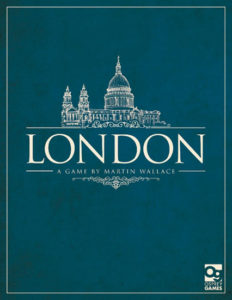 2017 was a fantastic year for new board games. My BGQ colleagues and gaming group alike would agree that, while years past have had a few breakout hits whose success was forecasted months in advance at various conventions, 2017 has had more sleeper surprises across the board than ever before (Thanks, Kickstarter, and Indie Publishers!).

I’ve personally enjoyed more “new hotness” games in 2017 than any prior year, but my favorite games published that year, however, are not of that year. No, dear readers, 2017, for me, was the year of the mighty reprint. In 2017, I’ve been marching to the slow and resonant beat of the great Second Edition, and very near to the top of my Top 10 list for 2017 (right now) is the second edition of Martin Wallace’s tableau engine building card game London.

London can be played with 2-4 players and takes about 45 minutes to play. It plays well at all player counts but is best with 3 players.

London takes place in the years following the Great Fire which decimated much of the older parts of London. Players are tasked with rebuilding the city and stemming the rising tide of poverty that comes with a rapidly developing city.

During the game, players use their hand of cards and a (very small) pile of money to buy borough cards, play city cards from their hand onto card stacks in their tableau, or run their city (i.e. activate their engine). Below is a little more information about how these cards work, but suffice it to say that while city cards and borough cards provide similar consequences when played or run in a city (money, victory points, and poverty increase/decrease), they differ in one important way: borough cards persist between city-runs, while city cards typically do not. Since poverty is earned based on the number of card stacks in a player’s tableau, regardless of whether or not a city card was activated in that stack, players are constantly balancing expansion of their tableau/engine against the ever-present threat of poverty.

Borough cards are purchased with money and can reward players with money, poverty reduction, victory points, and other benefits.

City cards are played onto a stack in a player’s tableau by paying money and/or discarding cards from a player’s hand. City cards can provide similar benefits to building cards but are typically only used for a single run of a city.

Running a city allows players to reap the rewards (e.g. money, victory points) and liabilities (e.g. poverty) before flipping their city cards over. Then, each stack earns the players poverty.

Because this is a Martin Wallace game, in the event that a player cannot afford to play a card, pay an opponent, or run his or her city, loans are always available. And par for the course, unpaid loans also add poverty each time a player runs his or her city. So why is poverty such a running theme? At the end of the game (triggered by city card or borough card deck depletion) poverty is totaled for each player. The poverty total for the player with the least amount of poverty is subtracted from every players’ poverty total. The remaining poverty then cuts (deeply) into each player’s victory points. The winner (surprise, surprise) has the most victory points.

London was always a thinky engine building game at its core. Those of you familiar with the first edition will notice that the map of London is gone. It has been replaced by the borough cards which will denote whether locations are North or South and riverside or inland. Cards affecting geographically specific locations are still present and card interaction with the boroughs still feels meaningful.

While the area control was a fun aspect of the original, it is clear with this second edition that it was not what made the game great. There are a lot of moving parts and probably too many to call this streamlined, but London was always an engine building game and with the second edition this has been focused.

London’s gameplay is balanced on a razor’s edge and every decision feels important. There are three resources to manage: money, VP, and poverty and all three are of consequence. This is not as AP inducing as one might expect, but it does tend to cause players to do a few double takes at the end of their turns. Throughout play, greed is repaid in poverty and every hint of success is just a card play away from failure.

Without fail, each clever VP engine needs to be managed with a poverty reducing one in the next; the loan that made players so flush in the early game often sees those same players not being liquid enough by the end game for repayment. This is one of the things I enjoy most about London. The ebb and flow of player engines between point/cash generators and poverty mitigators captures this perfectly.

Each game I have played has been made or broken by how players managed poverty appropriately against risk-reward probability for the next draw. As an experiment, in one game I completely ignored poverty mitigation and played to maximize in-game victory points. I don’t recommend you do that. I already tried it for you; it did not end well. Wallace designed the game to be balanced and for all resources (positive and negative) to be managed. This doesn’t mean that player strategy is bottlenecked or that there is only one path to victory, but it does mean that successful engines will not be laser focused.

London has been focused. While I enjoyed the first edition, this one feels much more like what was originally intended. My initial assumption that this edition would essentially be a travel version of the original was unfounded. This edition of London, even with the removal of the area control, feels full and balanced. It is a meaty and stressful engine building game under the guise of a deceivingly simple rule set; in short, it is a Martin Wallace game. If you like Martin Wallace games, this is as Martin Wallacey as the best of them. If that’s what you came here for, then boom, be satiated dear reader, the heart of London remains.

Final Score: 4 Stars – With too many moving parts to call this streamlined, Osprey focused the second edition of London on the engine building game it has always been at its core.

Misses:
• May run long for some players
• Requires a “dry run” for the first playthrough

[Jon LC’s historical context sidebar: In 1666 between 2 September and 5 September the Great Fire of London consumed much of Medieval London, decimating the homes of nearly 1/6th of the city’s inhabitants. Traditionally, casualties have been thought to be low (as in 6 deaths), but recent research suggests that the number of deaths of the poor and middle class were grossly under-reported and not well constrained. Pottery analyzed by archaeologists at the Museum of London demonstrates that the fire averaged 2282 degrees Fahrenheit and likely cremated the remains of those trapped in the inferno within the old Roman city wall. This wall, ironically enough, was used by the Romans to protect the old city from outside invaders. London by The medieval city streets and old Roman roads were not ideal for traversing or escaping, the city. John Evelyn, courtier, and diarist during/of the restoration, was quite critical of this pre-inferno city design and the hazardous building materials that were used illegally throughout the city before the fire. He and Sir Christopher Wren proposed designs for a city very unlike the medieval (and consequently current) city (a google search will show just how different the city could have been). In Martin Wallace’s London, players build city buildings and boroughs during this restoration period – on the open slate of a fresh hellscape as the city sought to mitigate the rising tide of poverty and homelessness.