A few weeks ago we did a preview for the new family game Let Them Eat Shrimp! by Dr. Finn’s Games (Biblios, Gunrunners, Scripts & Scribes). Their Kickstarter campaign is now winding down and I thought it would be a good time to take one last look at them as our newest Kickstarter of the Week. It’s actually rare that I get a chance to playtest our KotW choices, so I’m happy to be able to completely recommend this game. For those of you that missed the preview, you can still checkout our full game preview for an in-depth report. But for the short version, Let Them Eat Shrimp! is a great amount of fun. This tile placement game has players trying to spawn fish as efficiently as possible while avoiding the sharks. The game can be learned in minutes and we found it appealed to gamers and non-gamers alike. 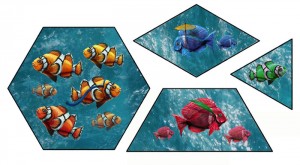 Let Them Eat Shrimp is a quick and easy tile placement game with strategic elements that make it fun for gamers and non-gamers alike.  Players start with 4 “fish tiles” (which come in 4 geometric shapes: triangles, diamonds, trapezoids, and hexagons) and with 3 egg tokens. On a turn, a player places 1 of these fish tiles onto the game board, which has images of fish eggs, shrimp, starfish, and sharks on it.  If the fish tile covers a fish egg, “spawning” occurs and the player collects more fish tiles.  If the tile covers a starfish, the die is rolled to determine either a positive or negative result (e.g., taking a new fish tile or losing one). If a tile covers a shrimp, the player collects a shrimp token.  Fish tiles covering sharks usually result in a player losing a fish tile or an egg token. At the end of the game, players score victory points for sets of fish tiles and for shrimp collected.  If a player loses all 3 egg tokens during the game, the player is knocked out and does not make it to game end to score.

Right now Let Them Eat Shrimp! is on track to make its funding goal and is absolutely worth a look. The graphics and components are going to be way better than what was in our prototype version, and Dr. Finn’s has a great history making engaging filler games. A pledge of $30 will get you a copy of the game and any stretch goals met. The game is scheduled to be in backers hands in September of 2014 and you have until Sun, March 16 to become a backer. So head over there today and check it out. 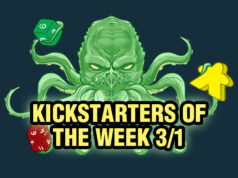 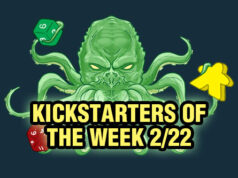 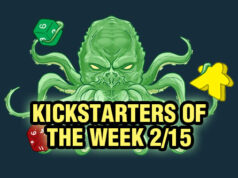