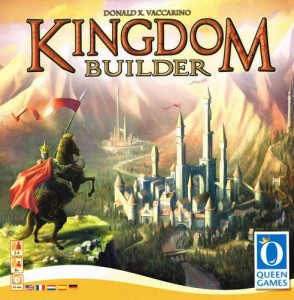 is. The rules are incredibly simple. In fact, it has been criticized by some people as being far to simple. Each players turn may last only a few second. However, in the easiness of learning this game, lies a much deeper strategy that is not immediately apparent. Personally, I think the simple rules and easy to pick up game play, make Kingdom Builder a hidden gem. Although it’s probably not so hidden anymore, as it recently won the Spiel des Jahres. On to the review!

So what is Kingdom Builder

. Essentially it’s an area control game. You have a map consisting of many hexes of various terrain types. Each turn, you are placing settlements on specific terrains in attempt to gain victory points on 3, randomly chosen objectives. That’s it in a nutshell. Divisively simple, fast turns, intriguing strategy. 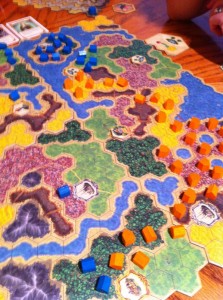 Don’t get too comfortable, as this won’t take very long. Once you setup the board, (choosing 4 of about 12 tiles, a randomness that adds to the games replay-ability) you then draw 3 random objectives from a deck of about 12. Each game will have it’s one victory point conditions, helping to make each game different. The range from trying to get each of your settlements in a line to placing them near mountain hexes.

The actual gameplay is simple. On your turn, you play the 1 card in your hand. It will be one of 5 terrain types. You place 3 settlements (little wood houses) on hexes in that specific terrain type. The only rule is they have to be adjacent to an existing settlement you already have down, if possible. That’s it. At the end of your turn, you draw another card and plan for the next turn.

To add some interest, each tile has 2 specialty hexes that can give you extra actions. If you play a settlement near a garden, for example, it gives you an extra action each turn, that lets you place 1 settlement on a flower hex. Each one of these special tiles you collect give you an extra specific action on your turn. 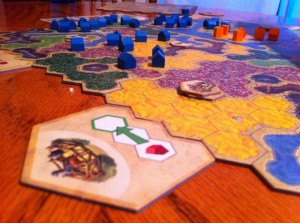 That’s where the strategy enters the game. While placement terrain will be predetermined, a lot of thought has to go in to how to use your extra actions and where to place your settlements (if you have either no adjacent possibilities or possess settlements on more than 1 terrain).

The game plays pretty quickly with these easy rules. My wife and I were able to get 2 games played in around an hour with minimal time referencing the instruction book. That’s always a good thing for a new game with no one to teach you. 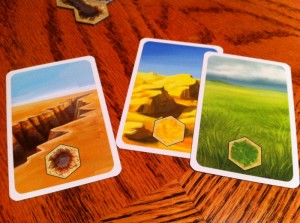 So how did our first game go? Heather seemed to grasp the rules very easily and knew what to do. She utilized the unique victory conditions for our game to amass an very large settlement area. We were playing with the card that gave you points for having lots of settlements grouped together and was able to get every one of her settlements in the same area. That netted lots of points for her at the end of the game. I’m sad to say, she kicked the bejezzus out of me the first game. I was trying to figure out some strategy and diversifying while she was going for one that clearly made the most sense.

I was able to make a comeback on our second play for a win. Since that first game, I’ve played 2 more times with 5 total players (utilizing the Nomads expansion). I’m happy to say that the game plays great with 2 players and with up to 5 players. Sometimes games really don’t work well when you move out of the optimum player range, but Kingdom Builder deliverers. 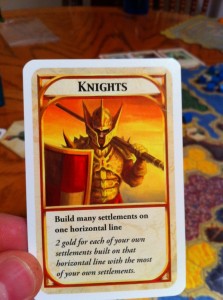 It’s hard to decide what particular itch Kingdom Builder scratches. As I said earlier, it’s hard to quantify where this game falls under. The game gets props for its simplicity and that it’s non-gamer friendly for sure. Kingdom Builder

is also a good amount of fun. If you can get past the fact that you only get 1 card every round, I think you will enjoy it. There is enough randomness to make every game different and the components are high quality. I would recommend this one to anyone looking for a lightweight euro-style game.

If you are interested in getting a copy for yourself, it’s about $42

Misses:
• Some will think the game play is too simple with only 1 card.