We review Kilter, a quick playing dexterity game published by Simply Fun. In Kilter, you are trying to place all of your blocks on the raised arms of a seesaw without any of them falling off. 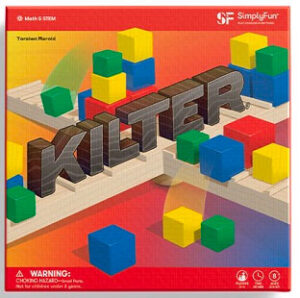 It’s well known around BGQ HQ that I have a soft spot for dexterity games. I love how easy they are to get to the table and the uniqueness they bring. One game might have you stacking odd-shaped blocks, while another might have you flicking discs at cardboard standees. Today, we are going to take a look at Kilter, a stacking game from publisher Simply Fun. Kilter can accommodate 2-4 players and takes about 15 minutes to play.

True to the publisher’s name, Kilter is easy to learn. Each player starts with an identical group and quantity of blocks. On a player’s turn they must place blocks, one at a time, onto one of the two upraised arms of the seesaw. Their turn ends when they either choose to stop, or when the arm they are placing blocks on touches the table. Any blocks that fall off must be collected into that player’s supply. The game ends once one player has placed all of their blocks and wins.

When I first played Kilter, I wasn’t too impressed. We played a quick two-player game and it seemed… OK. Fine, but ultimately forgettable. Yet weeks later, I pulled it back out near the end of a game night because it was quick and we had a bit of time. Plus I needed to get a few more plays in to write this review. This time, there were four players and it was a much better experience. Not only do I much prefer the higher player count with this one, but we also figured out some tactical strategies to help make the game more interesting. Let me explain.

With two players, the game works fine, but it loses a bit of tension because you have too much control over the board. I place blocks on an arm until I need to stop, and then my opponent goes. The very next turn I get to go again. With 4 arms, I have lots of places to place my blocks and only one other player to mess up my plans. It’s a bit too easy. Yet with four players, you have 3 other players going before you do, ensuring that the board state is going to change a lot before you get another turn. This added a good deal of tension to the game which we all found enjoyable.

The first time I played, I also wondered what was the point of the big arms. Players almost always just placed their blocks as close to the center as possible. I mean, it’s physics, why wouldn’t you. Yet with more players, those spots become more crowded and unstable a lot quicker, forcing players to seek out other places to play their blocks or risk the arm falling too quickly.

This led to us doing some tricky maneuvers. A player would place their blocks on the arm, but half hanging off and then stop their turn before the arm moved. Then the next player had to be REALLY careful, because if their arm hit the table, that half off block was going to tumble off onto the table, forcing them to take it. Figuring out creative ways to place your blocks to mess with your opponents is a nice little touch with Kilter that we weren’t expecting.

Despite early games being a little ho-hum, we ended up having a good amount of fun with this quick playing dexterity game. One of the nice things about Kilter is that it’s really easy to learn, meaning kids as young as 6 can get in on a game. While the game does play fine at 2 players, I would recommend trying to get the full four for the best experience. Overall the game is fun, easy to get to the table, and quick to play. Which is a win in my book.

Final Score: 3.5 Stars – A solid balancing game that should slide into anyones collection who’s looking for a quick and accessible dexterity game.

Misses:
• You really want the full 4 players for the best experience