We are halfway through June and and new summer releases will soon be pouring in from conventions. Speaking of, Andrew is back from Origins and working hard on his convention recap. Look for that in the new future. In the meantime though, on to the campaigns!

The Dark Eye – Magic of Aventuria

Bringing more Magic to the ENnie-winning The Dark Eye RPG with new rules and adventures.

A video game turned board game, first game “cartridge” of the series to come. Full of death, stealing, heroes and dragons. 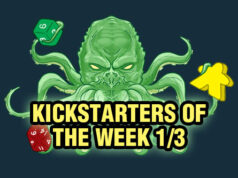