Board Game Review by: :
Andy Schwarz 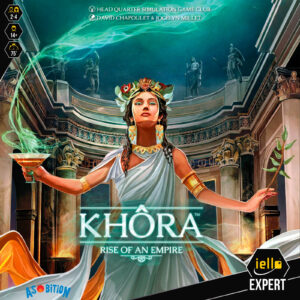 I have an old friend who lives in Zurich, but last Saturday, out of the blue he showed up saying he’d been in town for work and had the afternoon free. So we dove into a game neither of us had ever played, learning it old-school style by reading the rules together as we set it up.

Thus began our exploration of Khôra: Rise of an Empire, an economic game of simultaneous action selection and dice (worker) placement for 2 to 4 players.

Players first randomly choose a Greek city-state, each of which plays distinctly based on different starting conditions. Then they play 9 rounds where each player will roll 2 (or potentially 3) dice which function as workers that take actions, with higher die rolls allowing stronger worker actions. After the actions, players resolve a common event revealed at the start of the round. They then pay to advance their city-state’s progress on one of three key measures (economy, culture, or military) if they can afford to. Finally, they check to see if anyone has scored an achievement, which in turn can grant tax or glory benefits. After the 9th round, players tally final scores with the highest winning.

The heart of the game is the action selection phase, which is where all the interlocking puzzly bits of Khôra come into play. Everything you want to do is stronger if you do something else first, but that “something else” would work better if you did the first thing first, and so on. Figuring out the best path through that contingency thicket is what makes the game a fun challenge.

Once players have chosen their city-state and gotten the asymmetric starting bonus this provides, the game settles into a steady rhythm. Each of the game’s nine rounds begins by revealing an event card, but that event will only be resolved near the end of the round. Some events are unavoidable (for the good or bad), e.g., gain three military points (good) or lose two population (bad). Others may be worth trying to change the outcome during the intervening round, such as an event that rewards the player with the largest military. You may find it worthwhile to devote effort to growing your army if your army is a close second in strength, but the leader may do the same, turning this round into a fruitless arms race.

With the event revealed, players roll their dice and either exult at a high roll or lament that the gods have sent them such puny dice to work with, because your dice are essentially your workers where the more pips on a die, the more choice of action spaces that worker-die has. Roll a 1 and (unless you’re willing to sacrifice population), your worker-die can only use the 1-level (Legislation) or 0-level (Philosophy) actions, which are relatively weak resource-gathering actions.

The good stuff comes at 4 (Military), 5 (Politics), and 6 (Development). Military Actions lets you explore and potentially gain the critical Knowledge Tokens you need to score most of your End Game points, Politics is how you play cards which give you rule-breaking abilities, and Development lets you upgrade your entire city-state. You can do the Development upgrade a maximum of 3 times during the game but if you manage to do this and reach Level IV (a very expensive and difficult thing to achieve), the reward is quite valuable in terms of end-game points or during-game rewards that tend to yield end-game points.

After resolving all actions, players each get a chance to purchase an upgrade of one of their three tracks (Economy, Culture, Military), though certain improvements during the game (usually via Politics cards) might allow you to buy more than one upgrade if you can afford them. These upgrades make all your other actions more powerful, and they can also lead to achievements, which in turn generate two other important resources: Tax and Glory.

Tax generates money at the start of each turn, while Glory is a little less clear but more important. The biggest slug of points you’re likely to get at the end of the game will be from your Glory level multiplied by your total number of Major Knowledge Tokens. Unlike minor knowledge tokens, Major Knowledge can only come from the “exploration” element of the Military action. Thus no matter how peaceful you want to be, you are going to have to spend some time focusing on the military, but the military action is somewhat misnamed—you aren’t really fighting your neighbors with your army; your army is more of a Knowledge Token foraging force.

On the whole, play is quite simple once you get the rhythm of the game, and the designers were kind enough to print the turn sequence right on the side of your personal player board so you have a handy cheat sheet in front of you to keep your nose from being glued to the inside of the rulebook. Each Event gives you a sense of whether to try to alter the outcome or just stick with what you had planned, and each turn builds on itself. The asymmetric starting bonuses matter a lot in directing you down different paths, so a game that looks at first blush like 4 identical, dry spreadsheets actually turns out to have a lot of character built-in right from the start.

I’d been told the game is very dry and I guess that’s true, in that the only flavor in the game is the Event card you choose each turn and even here the events can all be boiled down to “how is this going to affect my tableau at the end of the turn.” But despite that, the game is really fun and the asymmetry provides more of a sense of rival Greek powers than you might think. Yes, I did feel that I was Corinth struggling against, and losing to, Argos, or Athens defeating Olympia by going very heavy on the economy track, and not just City A vs. City B.

Khôra also takes full advantage of the new fad of making double-layered boards, so that the wooden pieces all nestle gently into crevices in the cardboard city-state tableau, providing you with a very nice tactile experience. It brings to mind the late Douglas Adams’s definition (from “The Meaning of Liff”) of the word “Kentucky”: “Fitting exactly and satisfyingly. The cardboard box that slides neatly into an exact space in a garage, or the last book which exactly fills a bookshelf, is said to fit ‘real nice and kentucky.’” This component feature has nothing to do with the game itself, but the added tactile pleasure was a nice bonus and made the physical gameplay more fun than when I tried the game on Tabletop Simulator.

I really liked Khôra: Rise of an Empire and wish my Swiss friend would swing by again this afternoon to play some more. Sadly, though, this is the kind of game you probably won’t be able to get just anyone to play. It’s a true Kennerspiel, for sure. People who make fun of Euros do so for being exactly like Khôra; it’s low on theme, low on action, and really just a giant optimization puzzle. But as far as giant optimization puzzles go, this is a very fun one. It plays quickly once you get the rules down, and it can be reset for another game in no time, which I immediately wanted to do. If your gaming group likes medium-weight crunch, then you’ll probably adore Khôra: Rise of an Empire. If your group turns up its nose at the classic German Euro (even though Khôra was actually designed by a group of Japanese gamers called the “Head Quarters Simulation Game Club”), you may want to pass on Khôra.

Final Score: 4.5 Stars – I can’t wait to play it again. Khôra: Rise of an Empire may be dry and crunchy, but so are champagne and caviar, and what’s wrong with that?

Hits:
• Nice asymmetric starts give each city-state a personality of its own
• Quick gameplay keeps the pace lively even if the game itself is kind of crunchy

Misses:
• For a Euro lover, really there were none.
• For the non-Euro fan, you may find yourself thinking you ended up in an Excel for Dummies class by mistake.