We review Kanban EV, the new deluxified edition of Kanban from Eagle Gryphon Games. In Kanban EV, players are a worker on the assembly line of an automobile factory. 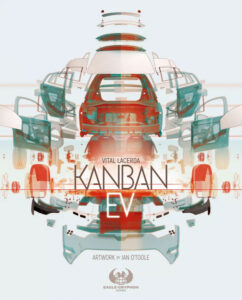 While my tastes vary widely, generally I prefer medium-to-heavy strategy games and I consider Kanban to be the standard-bearer that I measure all others against. Designed by Vital Lacerda in 2014, Kanban is a worker placement game where players have started a job managing an automotive assembly line and must try to complete their work effectively in order to impress their boss, Sandra.

Today we are looking specifically at Kanban EV, the beautiful reprint from Eagle-Gryphon Games with graphic design by Ian O’Toole.

What sets Kanban apart from the crowded “worker placement” genre is that you really only have a single worker. Each player will place their worker, and then they will activate top-to-bottom down the factory. There are five departments where you can perform actions like picking up designs, gathering car parts, assembling cars, test new designs, and receiving training.

Each area has spaces for two workers, the top space has fewer actions but will activate first. Not only do players take their actions in top-to-bottom order, but then you’ll move to a new station in the same manner. This leads to very impactful timing considerations as the players’ worker is never cleared from the board. If you are the first player to activate, you’ll also be the first one to move and still be blocked from all the actions your opponents have taken. The order of these departments is vital, from top-down:

It’s not just the other players at the table you need to worry about either. Your boss, Sandra, is represented by a pink worker who moves around the board with you. Not only does she block one of the possible spaces you might want to use, but she will also critique whichever player has trained the least in that department, costing them some points. Sandra also acts as one of the timers in the game, as she triggers weekly scoring every time she gets back to her desk and gives everyone points based on the cars they have claimed and upgraded.

On the face of it, all the individual departments are pretty simple. Designs and parts form the real resources of the game. Parts can be used to make cars at the assembly line or used along with a design to upgrade that car type. If you do make a car you can return a design to claim a matching car and put it in one of your garages. You can also spend your time training in each department—which not only helps keep you out of Sandra’s crosshairs but grants you additional actions in each department.

There are also meetings with Sandra that occur throughout the game. The timing of the meetings is controlled by how often players claim cars from the test track. Each meeting has four public goals that anyone can score. Each player has a hand of three private goals, and they must commit one to the meeting before it ends as well. But your ability to speak up in these meetings is dependent on your performance throughout the factory. You must earn speech-bubble shaped opportunities to flaunt your accomplishments by reaching goals and producing in-demand cars.

So why do I love Kanban? Everything in Kanban is a trade-off. If you get caught going into a meeting with only a speech bubble or two, you’ll likely be outperformed by your peers. But at times you’ll need to forego the actions that give you those scoring opportunities because you really need to grab certain designs or parts that may not be available for very long. The game ends after the third meeting or the third week ending and then, if there wasn’t enough to think about yet, you’ll have an opportunity to score some end-game goals as well.

It’s one of the few games where, after setup is complete, you really need to evaluate ahead of your first move. What are the end-of-game goals? What are the public goals for the first meeting? What private goals do I have? Almost as importantly, what is the turn order and how can I make sure I prevent getting blocked from my plans?

Kanban isn’t necessarily mean. But it is interactive. The easiest example is the assembly of cars. As described above, you must first assemble the car and then go to R&D to claim it. Because of the very well thought out layout of the board, you can almost guarantee you will have the first shot to claim a car you assemble as any players in R&D would have to clear out, and then the player in the assembly department would get the first chance to take those action spaces. But to make that work you need to plan ahead and already have the necessary design—if you must detour to the design department first that car will be free reign for anyone who already has a matching design.

That doesn’t even get into the administration department where other players could go, accepting fewer actions and last in turn order in exchange for the ability to use any department. Kanban is the opposite of multiplayer solitaire. You must always be interested and a little suspicious of your fellow factory co-workers.

There aren’t any direct attacks though, of course. And there isn’t randomness involved here at all. Going into a meeting without any seats can’t be blamed on a bad draw, roll, or any type of unfortunate luck. Nearly everything is face-up on the table. That doesn’t mean, however, that players are powerless. Keep in mind, claiming a car is what moves the timer toward the next meeting. So, it’s certainly a reasonable strategy to try to hurry a meeting along before everyone else can get prepared or try to delay it as much as possible if you find yourself vulnerable.

It’s worth noting everything here is true about the “old” Kanban. The Kanban EV reprint changes little about the gameplay. The penalties from Sandra are a little harsher. There are mini-expansions in the Kickstarter version of the game. But EV is worth the price tag, nonetheless. It’s prettier to look at, to be sure, but there are important functional improvements. Speech bubbles that replace cardboard seats that must constantly be flipped over. Meeting goals that lay out the scoring options more clearly. Recessed player boards that organize your parts and designs better and even have cutouts that indicate tested designs, an end-game scoring item that was often a source of confusion.

After dozens of plays, I still find myself drawn to Kanban EV every time it is offered up to be played. The variability in scoring with meetings and end game goals means no two games will ever play out the same. Kanban EV offers an ideal mix of tactics and strategy. You’ll need to have your eye on the end game goals, what you need to complete for the next meeting, and where your opponents are going and what they are likely to do. It is heavy both in terms of rules and strategy, but it pays off in a major way. And next time you set it up you’ll have a whole new set of circumstances.

For my money, it is heavy euro gamers’ shining star. I hope the new deluxe-ifed version renews interest and helps folks really dig into all this game has to offer.

Hits:
• Worker placement with lots of interesting timing based on the execution order of the various departments.
• Tons of variability from game to game with 9 different end-game goal tiles and 32 different meeting goals.
• Beautifully updated graphic design and production for my favorite game. Couldn’t be more excited to continue playing it.

Misses:
• Scoring, especially the end game, can be opaque.