We review Imperial Steam, an economic board game published by Capstone Games. Imperial Steam is an 18xx game that seeks to take this train genre into new and interesting directions. 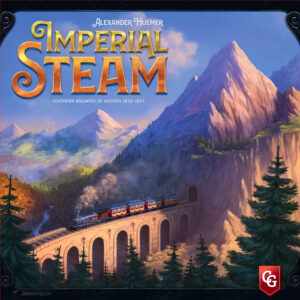 Unless a more knowledgeable reader corrects this in the comments, so far as this reviewer has read, 1829 is the first 18xx train game. Published in 1974, that would make the concept and structure of 18xx nearly fifty years old, without many signs of dramatic alteration. They feature heavy economic decisions combined with route strategy and market manipulation and are generally regarded as an enjoyable formula with many expansions.

There are some other titles that aren’t exactly 18xx but take similar approaches. Age of Steam (2002), Iberian Gauge (2017), and even Brass: Lancashire (2007) are notable titles with twists on the concept. Now, in the form of Imperial Steam, there’s another adaptation of the train formula. Interestingly, this game moves away from the traditional formula of strategic track ownership/manipulation and focuses more on players building economic engines from building factories, delivering resources to cities, and using influence with hub cities.

It’s a worker placement Euro game with an industrial era train game flavor. It plays 2-4 with 4 being the best way to play. At that player count, expect a 3-hour game, but it will likely be cut down with experience depending on the analysis paralysis tendencies of the players. For a learning game, stick with 2 players.

Imperial Steam has a mostly simple play structure. Over a series of rounds, players will use workers (hand tokens) on locations taking actions such as lay track, acquire resources, and possibly increase their influence by spending money. As is appropriate, money is the main resource to be used in the game and serves as victory points at game end.

The board is a network of town and city locations from Vienna to Trieste. Players will pay resources to lay track between urban areas, and, if they are the first to connect them, gain various bonuses. When players reach industrial hub cities, they can deliver resources from their factories to those cities and increase their influence. One of the curveballs that this game does employ is that factories do not continuously produce resources. Once placed, they have a finite number of resources to offer based on the experience level of the worker employed.

Other resources in the game are also tight. Iron, stone, coal, and wood may seem like the typical cubes that Euro gamers are used to pushing. However, in this model, there is a finite amount of goods to buy at markets and obtain from factories. In addition, players will struggle with where to store goods since locomotives determine how many goods can be stored while waiting to be delivered.

Adding to the difficulty, a player’s board tracks their stored resources, number of passenger/freight cars, and the level and type of employees they have. This is not the same as in a typical worker placement game. Rather, employees serve as another game resource, more like a requirement for placing on certain city connections. For example, to build a tunnel track between locations, you need a tunnel engineer in addition to the workers of a certain level (they can improve during the game) to match the required difficulty of the locations.

Finally, one of the most important mechanisms in the game are shares and contracts. Each player has a share price associated with their company. These shares can be sold to gain an infusion of cash; however, players lose 10% of their final score for each share sold. These lost points should be made up for by completing contracts. Unlike in other games where a contract requires goods to be delivered, these agreements require a player to reserve a certain number of factories and freight cars. Assumably, this means the player’s company is setting aside production for long term delivery to the contract holders. Another aspect of this is that the number of contracts in the game is fixed and never refills, so much of the game is a race to gain track, contracts, and factory locations.

At the end of a game, Imperial Steam doesn’t stop throwing curve balls. The game ends once one player connects their track network to Trieste or the game has proceeded through eight rounds. When that player finishes this connection, they gain money for each laid track in their network. They’ll also gain payments from other players depending on how many connections the other players’ networks will need to connect through to Trieste. For a player who focuses on ending the game this way, it can be very profitable, but they might also need to bypass other economic opportunities.

For a more in-depth explanation of the rules, they can be found on the Capstone Games website.

On its surface, Imperial Steam seems like a game with many complex actions. Truth be told, it is not the actions that are complex, but the implications of them which are monumental. Almost every task in the game has an economic effect on other players. This comes from one player moving ahead in the race to acquire limited resources/factories/workers and in the process driving prices up for other players. It’s pure demand-side economic competition, the pace of which rises as the game goes on.

Where players will have a problem is that the game does not use concepts players might be used to from other games. They’ll either enjoy the new ways these are implemented, or they’ll be too confused in their first game to let go and feel out what it offers. That’s the main reason this reviewer recommends a two-player learning game, not for the complexity of mechanisms, but for the implications of their outcome and discovering the best way to win. Players expecting a train game will be surprised. And players expecting a typical Euro won’t find that either. Imperial Steam is something different, challenging, and extremely tense on many levels.

And that’s where the high praise from this reviewer is warranted. Designer Alexander Huemer challenges conventions and derives something new. The variable setup enhances the replay value while the economic paths to victory depend strongly on strategies aligned to board opportunities and economic demands of the players. The result is extremely tight. For some, it may be too restrictive and unforgiving. Others will see a brilliant design that begs for replays to find a new formula for victory with each engagement.

The biggest criticism for this product comes from the production itself. It’s hard to know what original options the publisher had when designing the components, but on the whole, it feels very inelegant. The resource market is on the main board while the markets for factories are on add-on boards. In addition, the market for employees is on yet another board. Ostensibly, depending on the player count, this is necessary. However, it creates an overwrought table presence with lots of pieces to take from various sources. This isn’t a huge criticism, but it does make for a long setup and tear down.

Imperial Steam gives Brass: Birmingham a run for its money, and that’s saying something. They’re both amazing games with a similar feel. Where Brass might have a hiccup in complexity of learning, Imperial Steam has a hiccup in feeling out the overall engine building process. On the whole, Imperial Steam is a great experience bordering on perfection. It demands repeat plays, but if players can’t accept the challenge of the new model it presents for gaining and using resources, they should probably stick to more familiar titles.

Hits:
• New twist on Euro mechanisms
• Easy to learn
• Lots of replay value
• Strategies depend on board setup