We review Icaion, a resource management and engine building board game published by Tabula Games. In Icaion, players will be moving around the board and harvesting gems to try and earn the most victory points. 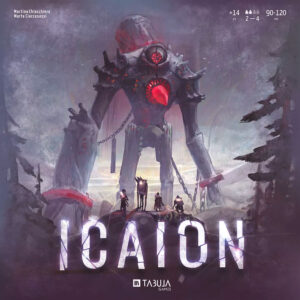 A new-ish twist on sci-fi is a good way to catch my eye. Stellar art and production will make me look again. A completely made-up word for your game title will make me feel uncomfortable talking about the game out loud. Good thing I do written reviews.

Icaion is an area movement, resource management, and iconography deciphering game for 2-5 players. It plays in about 2-3 hours and works best for two or three players.

In Icaion, players will be moving their seeker (character) around a map, deploying machines, extracting qoam (the major resource in the game), investigating the colossus (a giant, mysterious creature), and more. Players start with a unique character and ability combo each game.

The game is played over three years, each consisting of five or six rounds. A round begins by flipping over an event card. Most of these will reseed the board with qoam of a specific color, some will add parasites, and three cards throughout the game will make the colossus move, add parasites to the board, and/or attack.

On a player’s turn, they must either move (for free) or pay a blue qoam to set up camp. Following that, they may either take a standard action, take a special action, or both in any order they choose.

Standard actions include extracting to pick up qoam, deploying machines, killing parasites, investigating the colossus, and picking up and installing apparatus tiles. Special actions include playing a curio card or using one of three abilities associated with the emergency power supply tile.

Each of these actions, except for the emergency power supply actions, requires a different color of qoam. For instance, to investigate the colossus you’ll need one to three pink qoam, whereas playing cards require anywhere from zero to three green qoam. Most actions will get you points upfront, while some will contribute to end-of-year or end-of-game scoring.

At the end of the game, points will be awarded based on how many shards were collected by investigating the colossus, what apparatuses players installed, and the usual end-of-year parasite scoring.

What we have here is a gorgeous production. The art and colorful design drew me in. The details and presence of the minis in the game had me really excited for some thematic gameplay that tells a good story. The cardboard pieces and plastic gems are nice and chunky.

The game itself offers an interesting tactical puzzle. Each of your actions is tied to a different resource type with very little wiggle room. You can’t do it all well, but you’ll need to be able to do most of it to some degree. There’s a decent amount of tension since you can only do one standard action per round, but you’ll always want to do at least one more to feel satisfied. That tension is furthered by the emergency power supply tile that gives you extra options, but only when it is not exhausted. The game presents several paths to victory.

However, you cannot ignore installing apparati or investigating the colossus. This is really emphasized by the fact that not getting any shards from investigating the colossus will result in you losing a chunk of points in the end game scoring. That decision paired with the fact that you can double up on apparatus (end-game bonus) scoring with each shard you collect, makes the game feel a bit tunneled in terms of strategies.

Two of my biggest gripes stem from the rules. The rulebook explains the game in a pretty convoluted way, making it seem more complicated than it is. Once you know it, the gameplay is actually fairly straightforward. However, about once per page, there’s a little annoying rule you’ll need to remember, usually involving a number. These often felt like arbitrary decisions, and I have to believe there didn’t need to be so many of these cases. The reference cards, while nice, do not cover all of it in detail. The iconography is not straightforward. That means first-time players will spend a lot of time referencing their reference card AND the card reference in the rulebook. This slows an already slow game down even further. My other issue is how the game scales. Those little rules and details that I mentioned? Many of them change based on player count.

Icaion is a long game. One of those egregious box descriptions that are far removed from reality. You are looking at about 40 minutes per player. In addition to the rules and frequent referencing, that length stems from the core gameplay itself, which is AP-inducing because you can math out a lot of different options each turn just to squeeze out the most VP. Furthermore, you often can’t plan ahead because the board state changes pretty significantly in a round. One example of this that annoyed me was when you’d have a turn planned out, but then the best move is just to deploy a machine in a space where you can score 9+ points. This happens quite a lot and it’s not based on good planning or positioning. The game is more interactive and more interesting with more players, but once you get past three players, it’s not worth the time investment.

My last mechanical note is that the gameplay feels too restrictive. I enjoy a challenge as much as the next person, but as the game explainer during my plays, I constantly had to tell players they can’t do what they wanted to do because of this little rule that they forgot (remember, there’s a lot of those).

Finally, the theme that looked interesting at first glance is mostly window dressing. See that colossal miniature? Hardly a threat to you. In fact, you can go steal from it with little to no risk. Parasites are more likely to harm you, but it’s a rare occurrence. A Harvester will get you more resources, which makes sense, but the other two machines just get you cards and victory points. Blue qoam makes you move farther, gray/white qoam helps you eradicate parasites, etc… Why? I have no idea.

When I first saw this game, it reminded me a bit of one of my favorite games, Scythe. It’s a Euro resource management, engine building style game with great art, top-notch components, and some world building. However, it definitely doesn’t have the magic of Scythe. The engine building is very surface level. It’s very incremental with no upgrades being game-changing. Just a tiny tweak here and there. To me, that’s a bit boring. I want my engine to feel distinct from my opponent’s and potentially distinct from play-to-play.

There are some redeeming qualities to Icaion. Mostly the artwork and production. As a tactical puzzle, it’s nice to play for a few rounds. By the second or third year, there won’t be much progression or excitement left. Especially if you’re not enjoying yourself, you will feel every last long, AP filled, reference card checking, calculated turn that may just end of being scrapped because there’s a nice deployment scoring opportunity.

Final Score: 2.5 Stars – An interesting puzzle at its core with gorgeous production, but not fun enough to be worth all the referencing and the overlong gameplay.

Misses:
• Rulebook and iconography are not user friendly.
• Game lasts much longer than the enjoyment warrants.
• Theme is pasted on.