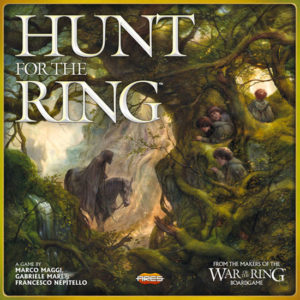 If readers aren’t familiar with the concept of “hide-and-seek” games, they’ve been around for a while. Scotland Yard was a precursor for many games in this genre, where one player takes on the role of the mysterious bad guy while the other players, as members of a team of investigators, hunt him or her down. In most cases, it’s the good guys hunting a bad guy (Fury of Dracula, Letters from Whitechapel, Specter Ops).

In the case of the game featured herein, the tables have turned. Hunt for the Ring features a group of evil Ringwraiths hunting a small group of hobbits led by Frodo and/or Strider the Ranger. The hunted player must make their way across a complex landscape of locations and paths, while the hunters use various powers to detect and corrupt the central character of Frodo. The experience is meant for 2-5 players and takes about 90 minutes with 2 players, but up to 180 minutes with 5 players. It plays best with at least 3 players to get the most out of the cooperative deduction of the hunt.

After setup is complete, a game of Hunt for the Ring moves through two day phases and one night phase for a round of play. Each day phase grants a turn to each player, while the night phase grants extra movement and hunting options to the Ringwraith player.

During a turn for Frodo’s company, they make a hidden move using a sheet of paper behind a screen (starting from one of three random locations). Then, the player chooses to move space by space through numbered locations or through “dot” spaces between them. The Ringwraith players will know that Frodo’s company will move a single space or take a double move, but, of course, not necessarily the exact location.

On Ringwraith turns, using a set of action dice, the Ringwraith player can move and take actions to find Frodo. One action is to use Sorcery cards which grant special abilities and bonuses. Another is to use a “Perception” to ask the Frodo player if their location has ever been in general areas (ex: “Are you in section A3?). Finally, if the Ringwraith player thinks they’ve found Frodo, they can perform a “Hunt”.

The overview above is primarily for Part 1 of the game. A second map on the other side of the board provides Part 2 as Frodo moves from Bree to Rivendell. In this game mode, the Lord of the Nazgul can make an appearance. Frodo is aided by Gandalf, who can misdirect searches and perceptions from the Ringwraiths. However, the biggest change is that Frodo’s movement is programmed by a card rather than selected turn by turn. This is supposed to indicate the “path” that Strider takes guiding Frodo to Rivendell. In addition, this card can change when Frodo is successfully hunted.

Some of the best hide and seek games are actually pretty simple at their core. What players might expect from Hunt for the Ring in reality becomes vastly different, so much so that it drains much of the enjoyment out of the game. This theme repeats in several aspects as can be shown below.

The hidden movement component of the game is a diversion from more traditional implementations. Here the hidden path of the hunted player can be discovered, eventually leading to their capture. If the Ringwraith players are systematic enough, this can happen pretty easily, but the Ringwraiths are also greatly restricted in their movement as well. What is punishing is that much of the availability of the hunt powers are governed by getting just the right die rolls and Sorcery cards. Not having these is a sure recipe for boredom during the game.

The other curveball is the difference between a hunt and a search for the Ringwraith player. Since a hunt is the only way to hurt the Frodo player, this should be an easier action to take. As it is, it’s again either governed by a die roll or by the time of day the Ringwraiths act. This makes Frodo’s escape easier, but planning for a big kill turn is especially hard on the Ringwraith players. In more than one game during testing, the Ringwraith players complained about this since it didn’t feel very thematic.

Add in to some of these basic frustrations a series of other minor frustrations. The use of the game’s miniatures was awkward since the minis are very top heavy and fell over often. A replay of the game doesn’t do much more than change starting locations and cards drawn. Otherwise, one game can feel like a previous one. Finally, the difference between the two parts of the game are significant and interesting, but the ability to draw a new card to completely escape the Ringwraiths in part 2 was overly frustrating to an already bothered Ringwraith player.

Hunt for the Ring has some interesting ideas and a decent game for fans of Lord of the Rings. However, experienced hide-and-seek gamers can see the flaws quickly. These flaws don’t enhance the tension and frustrate players during play. Combine this will a brutal downtime for the Frodo player and Hunt for the Ring is really not an exceptional game. Gamers looking for the best out of the hidden movement genre should look elsewhere.

Final Score: 3 Stars – Overly managed mechanisms and downtime draw down the tension hunting Frodo on the road to Rivendell.

Misses:
• Not a tremendous amount of replay value
• Overly complicated hunting mechanisms
• Miniatures are not sturdy
• Egregious downtime for the Frodo player