We review Heroes of Normandie for iOS. Now available on your iPad and iPhone, developer Slitherine has taken this great entry-level war game and brought it to our mobile devices. 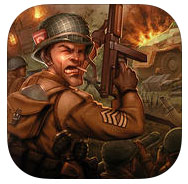 War games have been gracing our tabletops for decades in various shapes and sizes. From mindless dice chuckers like Risk, to more strategic games like Advanced Squad Leader, there is something for just about every level of experience.

I’ve had the good fortune to play Heroes of Normandie a few times (and it’s successor, Shadows Over Normandie) and have always enjoyed it. It’s a light, mindless war game that puts players in command of either Axis or Allies forces during World War 2. Combat is quick, intense and the game has a fast pace to it.

Recently, developer Slitherine has brought this fantastic war game to our mobile gaming devices. Heroes of Normandie for iOS is intended to be a digital translation of the board game, with some added bells and whistles. So lets jump in and see how this game translates from cardboard to pixels.

Heroes of Normandie is a casual romp through World War 2. The game make no pretenses that it’s not an super-serious war simulator with it’s cartoony graphics and cheeky humor. However if you are as serious gamer, don’t let that dissuade you, there is actually a lot of depth here to be enjoyed. Combat happens quickly and often in Heroes of Normandie, so expect a lot of intense action in your games.

To give you a brief overview of how the game is played, each player gets a number of units and starts on their respective side of the battlefield. These range from infantry, to vehicles, to heroes. Each turn is broken up into 3 phases:

Players also get 4 action cards that they can use during the round. These will help boost dice rolls, mitigate hits or provide other special effects that break the rules.

Games will end when the objective has been completed (or failed). This depends on the mission, but they range from killing troops (either a specific unit or a number of them), to occupying a spot on the map, to transporting documents.

I think Heroes of Normandie was a fantastic game to port over to iOS. As the cardboard game had no miniatures, gamers are not missing a thing by playing on the tablet. The game aways used two-sided cardboard tokens to represent the troops (with the art even being drawn from a top-down perspective), and this has been translated in perfect detail in the app.

In addition to that, the developer has added some nice graphical touches. Players will see shells fly out of tanks towards their target, and units will shake and shatter when they get hit or destroyed. After being destroyed, vehicles will be replaced with smoking wreckage and even dice will roll across the screen when used.

The interface in general works great on the mobile devices. Units are moved by dragging them to where you want them to be (with their range highlighted). Thankfully the game also features an undo button should you accidentally move a troop to the wrong spot.

Double clicking on any unit will bring up its full details, including what stats are on both sides of the token and what each of its icons mean.

Action cards are tucked away in the bottom of the screen, with a single tap bringing them up for inspection. A further tap will let you play them and choose targets.

I should note there were a few nagging issues with the initial release of the game, such as screen rotation not working and zooming not being smooth. Developer Slitherine has since patched the game and resolved many of these issues (including crashes that we were experiencing).

In case you can’t tell from the above, the translation from cardboard to digital was pretty spot on. This game was almost destined to be made into an app. Once you jump into the game, there are a few different ways to play: campaign, skirmish, multiplayer and rogue-like.

The campaign was easily my favorite way to play. There are 6 total campaigns in the game, 2 for each the Allies, Germans and Commonwealth. They all provide a variety of objectives, with the units that you have available to use changing from mission to mission. One of the neat things is that each mission has a secondary objective that would help make the next mission easier should you achieve it. Each campaign that you finish, also unlocks a unit to use in skirmish mode.

Skirmish mode is about what you would expect, choose a map, units, a side and have at it. I often would jump into a quick skirmish game to get a break from the campaign. I tried to get in a few multiplayer games, but the lobby was usually full of private matches. So if you are wanting to get a pickup game with a random player, you’ll have to hope you get lucky. Your best bet is to find a friend with a copy of the app and challenge them. Unfortunately, I didn’t have anyone else who owned the game to test with, so I was unable to try multiplayer online.

The rogue-like campaigns are an interesting addition. You start out the campaign (either U.S. or German) and have to buy your starting units. Each mission you win will not only carry your units over (except the ones that die), but also give you money to purchase more units. The downside is that if you lose, it’s all over and you have to start over from square one with a new campaign. This is absolutely for experienced players only. But it’s also a fun challenge for those seeking it.

One of the great things about playing Heroes of Normandie digitally is that the AI does all the heavy lifting for you. If you are attacking a tank through cover, the AI will handle all the math for you. Once you assign a target, it will even tell you the rolls you need to hit before you even roll. So if you choose a target and realize that its cover means you are only hitting on a six, you can find a softer target so you don’t waste you action.

Finally, the game boasts 5 different difficulty levels that can be changed at any time. Simply tapping on the difficulty level on the main screen will let you change it around. The easier levels will give more turns, more ammo and limit your opponent’s available cards, while the highest level is basically the equivalent to playing the board game. This was a great idea and should allow new players to ease into the game and adjust once they feel comfortable.

I had high hopes for the digital version of Heroes of Normandie. The 2D nature of the board game made it a perfect choice to translate to our tablets. While the game runs fine on both the iPad and iPhone, the larger tablet is definitely going to offer the superior gaming experience. Playing on the iPhone does require a lot of pinching and zooming, but if you are trying to kill some time away from home, the experience still works fine.

If you have even a passing interest in war games, I’d highly recommend picking up Heroes of Normandie. While the price tag isn’t cheap, it’s still way less expensive than buying the cardboard version. Plus, the app has a great amount of polish, offers a variety of play modes and is already offering some DLCs to add to the variety.

Hits:
• A fantastic translation of the board game
• Nice animated touches
• A variety of ways to play
• Easy to scale the difficulty level

Misses:
• Hard to find an online match
• App has a premium price