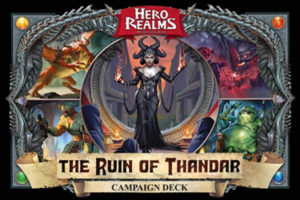 One of the hotly anticipated offerings from the original Hero Realms Kickstarter campaign was a cooperative mode. People have loved the *Realms line of games for a long time, but many have been clamoring to play it fully coop. Well now they have their chance as The Ruin of Thandar, a three mission campaign pack, is now available. Does it change Hero Realms for the better? Grab your character packs and sharpen your swords, because we are going dig in to this one and find out.

The expansion comes with 144 cards divided up into a few areas. Each character (you have the character packs, right?) has a new set of skill and ability cards, along with a few treasures. These are how they “level up” during the campaign. Note: They will be replacing skills/abilities with better versions, not adding more to their repertoire.

The rest of the cards are for the Masters (Bosses). They are divided into minions, events, and strikes.

The goal of each mission is to take down the boss before he kills you or escapes. Player turns are now divided into two parts: Master Phase and Hero Phase.

For the Master phase, you draw the top card of the master deck. If it’s a minion, it gets put into play. Each card also has a colored icon on the top, and the master gets a power based on the color of the icon (discards, extra attacks, heals, etc.). If it’s a strike, it gets added to the master and when there are enough, he/she flips over to their more powerful side. Finally, the master takes all the attack power, from their minions and itself, and attacks the current player (champions first).

A player turn is just like a standard Hero Realms turn, except that the player can’t attack the master directly while they have minions in their play area. There are also some rules for adjacency should you want to help out your fellow teammates.

I, for one, was really looking forward to this cooperative mode. I like Hero Realms quite a bit and playing cooperative sounded like a great idea, especially with the fantasy theme. Unfortunately, the campaign mode ended up being a bit of a mixed bag for me.

One of the main problems with The Ruin of Thandar is that it’s very luck based, and a bad market draw can destroy you in the game. Unlike in base Hero Realms, where both players are pulling from the market (and handicapped evenly with a bad market), if you get stuck early on with a market full of high cost cards, you may as well start over. The campaign is pretty much a race for how quickly you can take down the master. If you wait too long, he will get too powerful or escape. So building and optimizing your deck quickly is a must.

I did like how the campaign eases you into things by starting the series off with a bar fight. This mission wasn’t too hard to win and helps to introduce the new rules to the players without overwhelming them. I thought this was a great idea (even if it’s a generic fantasy trope). From there, the campaign actually branches off into two different directions, and, while they both converge at the same spot, does help the replay value by giving you a different mission for each path.

I will also say that I thought that the escape mechanic for the second mission was pretty clever. The Boss has an escape card that, once the deck is fully cycled, becomes active. If it’s drawn for the second time, the boss escapes and you lose. Of course, the down side is that if you get a bad shuffle and this card ends up on top, you will lose really quick. But it was a neat idea that I haven’t seen much in deck builders.

Finally, I do wish that the campaign was a bit longer. It’s only 3 missions, so you can finish it in an evening (assuming you don’t lose). Granted, that last mission is BRUTALLY hard, so you will probably be playing that one over and over for a while. But it was a bit disheartening to see that you really only get to use a couple of the upgrade cards. I know they will probably get used in future coop expansions, but it would have been nice for the initial offering to be a tad meatier.

The designers had quite the challenge for them trying to convert a dueling game into a cooperative game. I think that, while not perfect, The Ruin of Thandar can be fun. I definitely think it plays better with more people though. I tried it solo and it loses a bit of its luster. You see fewer cards, lose the cool proximity mechanic, and can feel a little repetitive (draw, attack).

If you are a fan of the Hero Realms game, and have already bought a lot of cards, The Ruin of Thandar is worth checking out if you’ve got the bug to play cooperatively. If you are looking to jump into Hero Realms primarily for the cooperative mode, I’d give this one a pass as there are better games out there that can scratch the same itch, ones designed around cooperative play from the ground up.