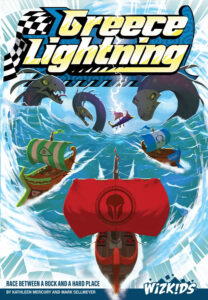 It’s well known around Board Game Quest headquarters that I’m the resident movie guy. That’s why it seemed like a no-brainer for our beloved publisher to suggest I review Grease Lightning, the new board game based on the classic film musical Grease.

It wasn’t until I received the game that I realized the entire thing was a set-up. Kathleen Mercury and Mark Sellmeyer’s design is actually called Greece Lightning, and instead of casting players as leather jacket-wearing ne’er-do-wells, the game turns its participants into ship captains racing in the Hydra Regatta around a mythologically influenced Greek island. (The game doesn’t explain what these ship captains should be wearing, but I had pajamas on while I played. And a leather jacket, obviously.)

Greece Lighting is a push your luck racing game where the goal is to be the first ship to finish two laps around an ever-changing racecourse. At the start of play, the circular track will be constructed using the game’s 12 starter tiles. Each tile has connecting pathways and stopping points for the ships.

Every turn starts with players simultaneously rolling their pool of three dice in a specific order. The first die players’ roll is their Navigation die, which has a maximum value of 3, and this roll is the minimum players will move on their turn. Next, players will roll one of their six-sided Movement dice. The value on this die is where the push your luck aspect of the game comes into play. Players have the option to roll their second Movement die, but if the number they roll is less than the first die, then they lose both Movement dice. Players can spend fish tokens to reroll dice and mitigate some of the bad luck they may encounter.

Once all players have finished rolling, play begins with the ship in last place. This ship also gets an extra bonus to their turn in the form of the Golden Fleece. This token goes to the last place ship at the start of every turn and doubles the value of their Navigation die. Players will move the total of all their dice and as they sail along the track, they will pass through special spaces that give out Favor of the Gods cards, fish, extra movement points, and new racecourse wedges that will alter the track on a later turn.

Certain spaces also have negative effects such as restrictive paths out of whirlpools or encounters with a Hydra that needs to be fed one fish or players can no longer move this turn. (One fish? Not a particularly hungry Hydra.) If a ship is blocking a path, players simply jump over that space and continue their turn.

The game ends after the round in which one ship has completed two laps around the course and the ship that has gone furthest beyond the finish line is the winner.

Setting up the course for Greece Lightning establishes the main decision players will have during the game, which is changing the racecourse by adding new wedges. This concept – an ever-changing track—is by far the most interesting aspect of the game. There are times when new parts of the course will be added during the current round, which can alter the shortest paths significantly or add hazards directly in front of other players.

Unfortunately, this is basically the only decision the game truly offers. Yes, players decide if they want to push their luck when rolling the second Movement die, but the penalty for failure is basically the loss of an entire turn, so it never makes sense to even try it unless the first Movement die roll is a 3 or less. Similarly, players get to “choose” the specific path they want to traverse, but it’s usually pretty obvious which direction is best. (“Can’t go that way because of the Hydra!” or “This way gives me three extra movement points!”)

This issue of a single path being most advantageous is exacerbated with a full complement of four players since spaces occupied by other ships don’t even use a movement point. It almost always makes sense to just follow the other boats to steal a few free movements. (It’s like that scene in Die Hard with a Vengeance where Bruce Willis follows an ambulance to travel through New York faster. See? Told you I was Board Game Quest’s movie guy.)

Another issue the game has is that nearly every space on the track gives an item of some kind, so ships accumulate a bunch of stuff as they progress. If a player moves eight spaces on a turn, they might:

That’s either way too much stuff going on for a single turn or it’s the least-interesting Dr. Seuss story of all time.

On top of all this fiddliness, the Favor of the Gods cards players receive throughout the game are inconsistently powered. Some, for example, allow players to hold more fish than everyone else, while others arbitrarily restrict how many dice a player is allowed to roll on their next turn. If the cards had an associated cost based on their relative power this wouldn’t be a factor, but they are always just attained from a random deck when landing on a space. Oh, and a good chunk of these cards are played against a single other player. (“Take That” alert! Everybody run away!)

To my way of thinking, the game’s biggest design issue is the Golden Fleece catch-up mechanism. I understand why it exists—to give the last-place ship a little boost in the next round—but all it does is highlight the random nature of the entire game. Doubling a player’s Navigation die for a turn reduces how much risk that player will be willing to take, which entirely undermines the push your luck portion of the turns. And if that player can double a 3, then that means they are guaranteed to move at least six spaces on the racecourse, which is a huge swing in movement for a single player.

As a fan of racing games, I had high hopes for Greece Lightning, hopes that actually grew when I was setting up the neat circular racecourse before my first game. Quickly, however, it was clear that there just wasn’t much depth to the game and the choices it presented were fairly uninteresting.

Still, the game won’t ruin your day if you just sit back and let it happen to you, but that doesn’t necessarily say much for the overall depth of strategy. The good news is that it plays very quickly and is moderately fun in short bursts. (The box lists the playtime as 45 minutes, but that was on the long side even in our four-player games; games with two players often lasted just 15 minutes or so.)

While it’s not a game I can really recommend—go with Flamme Rogue or Cubitos for your racing fix—this might appeal to families with kids in the age range just above “children’s game,” but not quite ready for something like Ticket to Ride. I even considered playing it with my kid, but she’s still a bit too young to read the card text on her own. (I considered playing with the bigger kid, that is. The smaller one would undoubtedly take on the role of the Hydra, destroying the racecourse and all the ships on the table without remorse. You know, kind of like the Kraken in that Liam Neeson movie Clash of the Titans, which is a remake of a movie with Laurence Olivier. Classic movie guy reference.)

Misses:
• Fiddly, both in terms of the board moving during play and the number of bits you must handle
• Very little luck mitigation
• Push your luck aspect doesn’t really come into play
• Too many “take that” elements
• Random powers on Favor of the Gods cards
• Over-powered catch-up mechanism