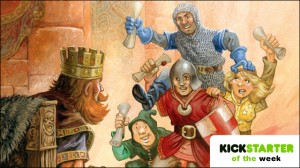 I really like games that have both minimal down time and a good amount of player interaction. That’s one of the reasons I like a good backstabby game. (That’s totally a word). Messing with my fellow players is just so much fun, as long as it doesn’t end up as a gang-up-on-the-leader type game (I’m looking at you Zombies!!!). Enter our newest Kickstarter of the Week: Give it to the King. I’ll be honest, I wasn’t expecting too much when I first came across this campaign. The board seemed simple and so did the game play. But after reading more about it, I thought it was a great idea.

In the game, players are trying to race down the hallway to deliver messages to the King. The great thing I found out about Give it to the King is that you won’t always be moving your own messenger. There are a number of rules about how the messengers move and when you can move your own. While the obvious choice may be to always try and move your own messenger, the designer did a great job of making sure you’ll have to think hard about which messenger to move with each die roll. If you are looking for a game that seems to be easy to learn yet sneakily tactical, this might be right up your alley.

Give It to the King! is a game for 2-4 players where you will become a Royal Messenger racing against the other players, as you try to be the first to deliver messages to the King at the end of a long hallway. When it’s your turn, you can move any player’s messenger. So long as you do not move yourself, you can maintain control of the die and the board. But as you press on, chances are you will run into trouble and have to pass the die. Will you use the power of the message you carry to keep going, or should you use it to stop someone else from reaching the King before you? Delivering unused messages pays you the most gold, so it will always be a tough decision either way. If you are ready to become the Captain of the Messengers and win the most gold, then grab a scroll and get going!

The campaign page is full of reviews, game play videos and even the rule book if you are interested. The game play in Give it to the King seems fun, frantic and highly interactive. Wow I don’t think Give it to the King will wow anyone with its deep game play, it does seem to make for a great filler game or something when you are in a lighter mood. The game is very close to its funding goal (at the time of this writing) with plenty of time to spare. They also have a number of stretch rewards planned and I wouldn’t be surprised to see a number of them unlocked. A pledge of $28 will get you a copy of the game and all stretch rewards. Give it to the King is scheduled to be in backers hands in January of 2014. You have until Friday Sep 20th to become a backer so head over there today if you are interested in pledging. 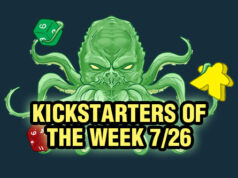 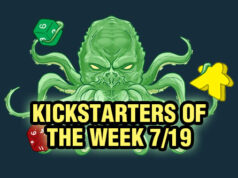 Kickstarters of the Week: 7/19 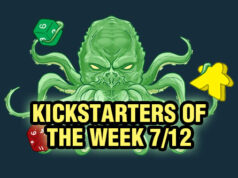 Kickstarters of the Week: 7/12