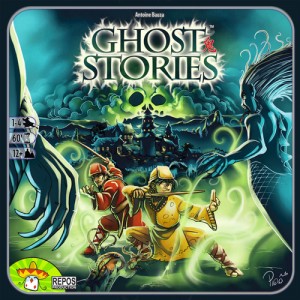 I like cooperative games a lot. I believe this is the first one I’ve reviewed for Board Game Quest. Coop games usually have some interesting mechanics that help differentiate themselves from other games. They have to, since the only thing opposing the human players is the game itself.

The other notable thing about coop games is that they are usually fairly hard. My average win percentage for a coop game usually hovers around 25% (depending on the game). Recently, we had the chance to play a game of Ghost Stories

by Asmodee games. I’ve actually played this game a couple of times and every game has been a tooth-and-nail fight to the finish.

Ghost Stories is a cooperative board game for 1-4 players that plays in about an hour. Ghost Stories plays best with 4 players.

If you have ever seen the old Akira Kurosawa movie, Seven Samurai, then you might be familiar with the them of Ghost Stories

. Players take on the role of a samurai defending a small village from attacks by a series of ghosts. Each turn, you and the other players spend your time attacking ghosts (who appear and attack non-stop), moving about the village and requesting assistance from specific villagers. You repeat these actions until you get far enough in the game for the incarnation of Wu-Feng (big, bad evil guy) to show up. Defeat him, and the village is saved and you live on as the heroes that saved the day. Let the village get overrun by ghosts and you lose the game and must feel shame.

The first thing you will notice about Ghost Stories is its fantastic artwork. Every village title and ghost card is beautifully illustrated that really brings the theme and setting home. Each tile and card is also labeled with a series of icons that help players to understand their specific functions and actions. These icons have a bit of a learning curve, but once you get used to them, they work really well.

Also included are some nice sculpted minis of the samurai and the Buddha statues for the players to use. Asmodee Games is not stranger to providing a immersive game experience and it’s obvious they didn’t cut any corners with Ghost Stories.

So, how do you a run a game where the game itself is your opposition? Pretty simple mechanics actually. The game board is a series of 9 village tiles randomly placed in a 3×3 grid. On each of the 4 sides of the grid of tile sites a player board. You samurai figures can move around the village tiles and can move 1 tile each turn. (certain special powers will help break that rule).

On a players turn, the first thing they must do is activate the ghosts. If they have no ghosts in front of them (they can have up three on their player board before bad things happen), then they draw a ghost from the haunting deck. The ghost is placed on a specific player board matching its color if possible. The ghosts also have a set of icons on their card that tell the players: how to beat them, what bad things they do when they are spawned, the actions they take each turn and what happens when they are defeated.

Some ghosts will damage a player while others might capture your battle dice. One particularly annoying type of ghosts are the haunters. These figures start on the player boards and move slowly towards the village tiles. If they reach a tile, they haunt it. A haunted tile is flipped over and players can’t use its powers. If the players have to many haunted tiles then it’s game over.

After the ghost card has been drawn, then the player gets to take his turn. A player can move his figure one tile if he desires and either attempt to battle a ghost (mostly by rolling colored dice) or using an action from a village tiles. The village tiles will do things ranging from: helping battle the ghosts, healing players, giving resources, or even bringing dead samurai back to life.

Battling ghosts involve rolling the battle die and trying to get enough matching color symbols to equal the ghosts power. Players can also use their colored tokens to aid in this fight. Succeed and the ghost is banished to the discard pile, fail and you will have to try again next turn.

Once a player takes their turn, the next player goes in a clockwise manner. Each player continues to take turns until the ghost deck has been cycled through enough for the incarnation of Wu-Feng to appear. If the players can kill him then the village is saved and they win. Lose too many village tiles or have all samurai die, and it’s game over.

Within the first five or six turns of Ghost Stories, the game will have made it clear that you are in for a knock down, drag out fight. The ghosts will relentlessly be coming at the village. Halfway through the game you’d love to have round to just catch your breath, but don’t expect it. Ghost Stories isn’t a game about feeling like the baddest fighter on the block. Ghost Stories is about treading water until you can get in that lucky knock out blow.

And that’s where I think the charm of Ghost Stories lies. Players are in for the fight of their lives and they will lose, a lot. But when they win, oh boy is it sweet. I rarely savor a victory in a board game like I do in Ghost Stories. When I win in this game (it can happen), I really have a sense of accomplishment.

The other nice thing about Ghost Stories is how incredibly thematic it is. From the rich and colorful artwork to the unique powers of the samurai, Ghost Stories really makes the players feel like they are defending this ancient, asian village. I could stare at the colorful artwork all day long, its that well done.

So what do I keep coming back for more if I lose so much at Ghost Stories? Easy, because the game is a ton of fun. The game rules are simple enough for anyone to pick up and fighting and banishing ghosts can be quite enjoyable. I also like the deep strategy to be found by smarty using my samurai’s powers and the unique village tiles. Ghost Stories has a lot of depth packed into this simple ruleset.

Unfortunately, Ghost Stories doesn’t really do anything to solve the main issue that will plague any cooperative game. The “quarterbacking” or when the experienced player starts to dictate what the other players should do on their turn. If that kind of issue bothers you, then be advised that it can happen in Ghost Stories as well.

But quarterbacking aside, there should be plenty for a player to do on their turn. In fact, it will be a rare occasion when you feel as if you have nothing to do on your turn. you will constantly feel like you could use another 6 actions each turn. But that’s party of the beatify and challenge with Ghost Stories. Simple to learn, difficult to master.

As far as where this game ranks with other coop games, that’s hard to say. I don’t think it’s able to dethrone my favorite coop game, Pandemic, but it will still hold a permanent place in my game collection. The play time is fairly fast and players don’t have a lot of downtime between turns, which is good in a coop game.

All-in-all, if you are looking for something different to play where you can all be on the same team, then I’d say give Ghost Stories

a shot. A word of caution though, the game is somewhat symbol dependent that can add to the learning curve. I won’t say it’s a gamer only game, but it’s probably slightly more advanced then you’d choose for a non-gamer friendly group. If you are looking for something that’s easier for non-gamers, I’d hit up Pandemic first. That being said, Ghost Stories is still a lot of fun for anyone that loves a challenge.

Misses:
• Bit of a learning curve to know all the symbols
• Game is somewhat difficult and will turn off the more casual gamers. 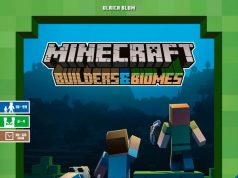 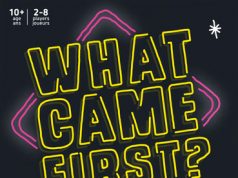