Welcome to an all new weekly column from Board Game Quest. We have a bit of a Kickstarter gaming addiction here and feel that we need to share this joy with you, our faithful readers. To that end, we are introducing a new weekly features: The Kickstarter of the Week. These will be only games (or gaming related) that we feel would be interesting to you and worth backing. We will work hard to cull through the many different options on Kickstarter each week and bring you some of the best. We hope you enjoy our new weekly series. Now, without further ado, here is the inaugural Kickstarter of the Week:

When choosing our first entry for the Kickstarter of the Week, I decided to go with the game I’m most excited about right now. Galactic Strike Force is being published by Greater Than Games. They are known for producing the amazing game: Sentinels of the Multiverse. If you don’t know about this game, be sure to read our full review.

The game can be won by the players in two ways: either by destroying the Opposition Flagship, or if at any point there are no Opposition ships in play. The Opposition forces can win the game by Grounding all of the Strike Forces ships, or by Overrunning all three sectors.

So there you have it. While the game art and rules are still not finalized, this game seems pretty exciting. It combings some game elements I love: cooperative game, deck building and Sci Fi. That, combined with Greater Than Games reputation for putting out a high quality product convinced me to be a day 1 backer. And I wasn’t the only one. Galactic Strike Force is already at 117% of goal (at the time of this writing) and the project is cruising past its stretch goals. So head over to their Kickstarter page if you’d like to know more about this game. 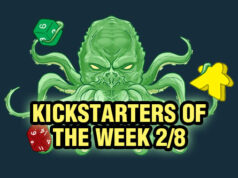 Kickstarters of the Week: 2/8