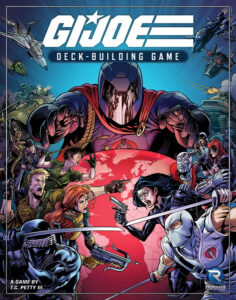 As a child of the 80s, I can say in my completely biased opinion that those were the golden times of Saturday morning cartoons. He-Man, Teenage Mutant Ninja Turtles, Transformers, Thundercats, Duck Tales… I lived and breathed those. Yet none more that G.I. Joe. I’m sure you can hear the theme song running through your head right now.

Well get ready for a healthy dose of nostalgia as publisher Renegade Games has released their G.I. Joe Deck-Building Game. Designed by T. C. Petty III, this cooperative card game will have you gathering up your group of Joes to try and stop missions by Cobra. You know the drill.

Each player starts with a 10-card starter deck composed of random Joes, a few pieces of equipment, and their leader card. A player’s turn has two parts. With their hand of five cards, they first decide if they want to go on a mission.

Missions can either be story missions or side missions. A story mission will advance the game (whether you beat it or fail) and other players at the table can join in when the active player starts it. To attempt a mission, first you must pick a vehicle, the VAMP is the default, starter jeep, but many of the iconic Joe vehicles can be recruited during the game.

Then you and your fellow players decide which Joes they are sending on the mission. Most missions have skill keywords and if your Joes match the mission skills, they get bonus dice to roll. Once your dice pool has been rolled (50-50 for a hit on a die, with 1 side having 2 hits), you check the hits against the mission target. Get enough and you beat the mission and gain the rewards. Fail and you incur the penalty. Some missions will also have you drawing complication cards to make things a bit more difficult.

Finally, the active player gets to recruit new cards by using the recruit points on the cards they played that turn (including ones that went on the mission). Unlike most deck builders, recruited cards got to the TOP of your deck, not your discard pile.

Turns proceed in this manner until the game ends with a win if the last story mission is defeated. Players lose if the threat meter reaches the top of the track, the market runs out of cards, or Cobra Battalions have covered 5 cards in the market and you need to add a sixth.

When I hear that a board game is using a license from a popular intellectual property (IP), my skepticism meter immediately starts going into overdrive. Will this just be a crappy game using the IP as a crutch to sell copies to its fan base? For this game, I did reserve a bit of optimism because Renegade is a pretty solid publisher and T. C. Petty III has a good track record of game design.

And you know what? The G.I. Joe Deck-Building Game is pretty darn good! It actually uses its theme to great effect… well as much as any deck builder can. But this is far from just a slapped on theme. I thought it was a great idea to not only include vehicles in the game but make them a central mechanic. The vehicles were such an integral part of the toys and cartoon, that it’s great to see favorites such as the Skystriker, Tomahawk, and Killer Whale make an appearance. Each vehicle will not only have a limit of how many Joes you can take to a mission with it, but also give you bonuses if the vehicle matches the mission type. It also looks like Petty tried to tie the Joes skills to their character source as well. Mainframe is a good Tech skill, Jinx has martial arts, and Lift Ticket has vehicles. All around solid themeing with this one.

Each player also gets to start with a unique leader. While they aren’t crazy different, they do each have a special power that kind of nudges you into a direction to build your deck. For example, Roadblock is good with gear, while Flint wants to have transports in the hanger. They can also be upgraded during the game to a more powerful version, giving players an early goal to work towards.

For the missions themselves, they are resolved via dice rolling. While this does add a layer of randomness on a game that already has plenty of it, I never felt like the dice were unfair. With a 50-50 success chance on each die (plus the 2x side), they worked to add a nice bit of tension to the game. The cards also give you ways to mitigate bad rolls, either through rerolls, extra dice, or awesome “Knowing is half the battle” cards.

Speaking of randomness, that’s probably the biggest knock against the game. You have dice rolling, you have card drawing into your hand, you have facedown complication cards, and you have a randomly drawn market. Bad rolls can sink a mission, as can drawing a hand with no Joes. You can’t even attempt a mission without a soldier. And if your back is up against a well, failing from the dice going against you or just a crappy draw could potentially leave a sour taste in your mouth. So know your preference on randomness before you get into the game. For us though, we never had an issue with it. The engaging gameplay more than made up for it.

Finally, I was a big fan of the cooperative nature of the game. I liked how you can be involved on another player’s turn, helping to minimize downtime. It also creates some interesting decisions, such as if you send Joes to help another player’s mission, then you might be left with a shallow hand for your turn. There was a couple of turns that I had only 2-3 cards in my hand to play. Which kind of sucked but it was a worthwhile tradeoff for helping to defeat a difficult mission.

Overall I thought that G.I. Joe Deck-Building Game was pretty fantastic. It’s easily one of my favorite games released in 2021 and one I did not expect to like as much as I did. Not only does it play well at all of its player counts, it even has a fun solo mode for when it’s just you. However, I do want to warn you that the rulebook for the game could be a lot better. A few times we had to hop online to look for answers. But if you can get over the learning curve from the poor rulebook and deal with the randomness inherent to the game, the G.I. Joe Deck-Building Game is a great cooperative experience that is a must-own for any fans of the cartoon.

Final Score: 4.5 Stars – A great deck-builder that uses its theme really well for some engaging gameplay.

Hits:
• Nice use of the GI Joe license
• Cooperative and interactive mechanics
• Many ways to mitigate the randomness of dice rolls
• Works well at all player counts, including solo

Misses:
• Rulebook could use some help
• A bit high on the randomness scale