We review Flotilla, a sandbox style board game published by WizKids Games. In Flotilla, players have many different paths they can forge to claim those precious victory points. 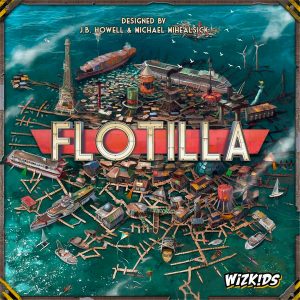 For the history buffs out there, the Nuclear testing at Bikini Atoll probably brings back striking visuals of mushroom clouds. But what if one of those tests went horribly wrong and the earth was devastated by earthquakes, tsunamis, and irradiated oceans? Sure, that would definitely suck, but that’s also the premise of Flotilla, a new nautical-themed, sandbox game from WizKids Games. Flotilla gives players a plethora of options for their strategy, but is it fun surviving in this post-apocalyptic world? Let’s find out.

There is a LOT going on in Flotilla, so I’m just going to give you a very high-level overview of what the game is about here. If you want the full run down, you can download a PDF of the rules here.

The goal in Flotilla is to collect the most victory points over the course of the game. Players all start out as “Sinksiders”, but my flip to “Skyside” at any point in the game (or even not at all). So, let’s start out by talking about what you do as a Sinksider. Flotilla is a card-driven game (ala Concordia if you’ve ever played it), so each turn you will play one card from your hand to take the listed action.

There are a few different cards in your starter deck:
The founder lets you build out ocean tiles (possibly gaining toxicity as you explore) in your area. The delver lets you explore your ocean tiles for resource barrels and other goodies. This is handled via dice rolls based on where you are exploring and how many skiffs you have in your fleet.
Those barrels can be traded (using the trader card) in for fat cash at the market, with every barrel sold moving the market price down (ala Clans of Caledonia’s market system). Money is used to buy more skiffs, outposts (to score VPs) or hoarded for when you join the Skysiders.
Then there is your speaker card, this lets you move the tracker on one of the guild rondels. Moving your tracker will grant you minor benefits associated with the guild (resources, tiles, etc…), new/better cards for your hand, or allow you to place seals for area control.
Finally, there is the scholar—who copies a player’s top discard—and the captain that allows you to get your played cards back in your hand.

Any point in the game after playing a captain card, a player can decide to forgo their seafaring life and join the flotilla sky side. In doing so, they sell off their skiffs, turn in most of their ocean tiles, and flip their cards and player board over. As a skysider, players are no longer exploring the ocean, but their founder card now lets them build out the flotilla (Carcassone style), earning them victory points in the process. They do so by using resources, either ones they had on hand, or buying from the market. And instead of delving for resources, they are researching artifacts for money. There are other differences, but those are the main ones.

The game ends when all the VP tokens have run out. The round is finished and the player with the most points wins.

I wasn’t kidding when I said that there was a lot going in in Flotilla. I took me a few reads of the rulebook and even a gameplay video online before I was really able to wrap my head around this title. Part of that was because of the unique dual-sided nature of the game. But the other part was that the rulebook was not that great as a learning tool. The rules are all there, but the way it teaches the game isn’t that intuitive. A little TLC here could have gone a long way.

But once I sat down and started playing the game, I really loved how many options a player has during the game. While there are only a handful of cards in the starter deck, when to take each action can be just as important as what action you are taking. Many of the systems in the game are interdependent on each other. You must explore before you can delve, you must delve before you can sell, and you must sell to buy more ships and outposts. And while all that is going on you must be mindful of the guilds.

The guilds are important not only because they give VPs and minor benefits, but because that’s the main way to get better cards in your hand. Virtually every card from the guilds is going to be a better version of your starter cards, so neglect them at your own risk. In fact, I’d say that the Speaker Guild is arguably the most important guild in the game. They are the ones that have more powerful cards that let you move the guild markers. Without one of those, it can be really hard to keep up with your fellow players on the tracks. In one of my games, I went for another guild first and never got a speaker card. Eventually, I had to give up trying to get more cards because I just couldn’t keep up with my opponent’s movements. Interestingly though, I still ended up winning the game. But it certainly was a lot harder with mainly starter cards.

Which brings me to the big decision in the game. When/if to go Skyside. Flotilla is almost two games in one because Seaside plays so differently than Skyside. I say almost because guilds still work the same in both phases, and the two have an almost symbiotic relationship. One of the reasons for that is the market. Sinksiders are going to be driving down the market because they have no reason to buy resources. Eventually, all resources are going to be worth $1…that is until there is a Skyside player who will start driving up the demand. The time of when someone turns Skyside, can have a huge impact on the market. If its early, those prices will never really bottom out.

Skysiders are also going to be helping the Sinksiders delve by building sonar stations. When you delve, there is a risk of gaining toxicity. Yet as sonar stations are built Skyside (for victory points), delving gets much safer and even a bit more lucrative. Overall this gives the game a nice balance between the two factions of the game and also a ton of replay value. Trying to decide when, and even if, to turn Skyside is a really big and interesting decision in the game.

While Flotilla is a great game that gives players a lot of freedom to forge their own path, the biggest barrier to entry is probably going to be its learning curve. There is just so much to do and wrap your head around that it will probably be a few rounds before things start to click. I don’t even bother explaining Skyside stuff to new players until after the game is well underway. It also has a playtime of at least 2-3 hours, so this is a game that’s going to dominate your evening with its lengthy rules explanation and its thick playtime.

My only other knock against the game was the randomness that you will have to deal with. Toxicity is handed out based on die rolls and tile draws. The higher your toxicity goes, the more negative victory points you are penalized. But a lot in the game hinges on what you roll or what tiles you draw, so if you abhor luck in your game, Flotilla does have a certain degree of it. The good news is that it doesn’t really feel like it powers the game, but players also have less agency then you’d typically like in a game in this weight class.

Flotilla is an ambitious design that had the chance to go horribly, horribly wrong. With so much going on and the dual nature of the factions, designers J.B. Howell and Michael Mihealsick had a lot of balancing to do. But overall, they succeeded in making a game that, while isn’t wholly unique with its mechanics, delivers a gaming experience that definitely feels new and different. How often Flotilla will hit your table is going to depend on how much you gravitate to a game of this weight, and if the 3 player minimum is a barrier for you. If you are a mid to heavy euro fan, this one is worth soldiering on through the learning processes. While the rulebook could have definitely been better, once you wrap your head around the gameplay, you can have a lot of fun with Flotilla.

Final Score: 4 stars – A great sandbox game that gives you many paths you can forge to find victory.

Misses:
• The rulebook could have been better as a learning tool
• A bit of a learning curve combined with a lengthy playtime makes it harder to get to the table