We review Farm Rescue, a cooperative board game published by Brain Games. In this coop take on memory match, players must work together to try and turn all the animals on the farm face down. 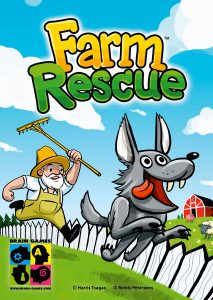 So, here is an interesting tidbit, I have a really good memory, yet I’m not very good at memory board games. I can recall the code to skip to directly to Mike Tyson in the original Mike Tyson’s Punch Out for the NES (0073735963 for those curious) yet drop a memory game in front of me and I’ll rarely be the winner.

But thankfully the designers at Brain Games have come up with a solution for that issue. Farm Rescue is a cooperative memory game that will have players working together to protect their farm from a hungry wolf.

In Farm Rescue, there are 5 different types of animals, each of which is portrayed in 5 different colors (which makes 25 different tiles for those keeping track). The animals start in a 5×5 grid, face up. On a player’s turn they roll the two dice, which determine the animal and color that needs to be flipped face down.

If the tile has already been flipped face down, then the players must figure out which face down tile contains the right animal and color and flip it back face up. If correct, the farmer moves one space forward. If incorrect, the wolf moves. In either case, the chosen tile is flipped back facedown again.

I’m sure it’s not going to come as much of a surprise that Farm Rescue isn’t going to be one of those family games that straddles the line between games you play both with and without your kids (such as Ice Cool or Rhino Hero). That’s not to say that it’s a bad game, far from it, but it also is going primarily to appeal to a younger subset of gamers.

In terms of the gameplay, I’ve always found little kids to be much better at memory games than adults. Perhaps this is because they have an easier time focusing on one task while my brain is constantly thinking of about a million things. But thankfully, Farm Rescue is a cooperative game and, I’m unashamed to admit, that the little kids I played with defiantly carried me in this game. And that’s the nice thing about it being a cooperative game, if one player has a solid memory, they can help out other players.

On the downside, there is nothing to stop a player who knows where things are from trying to take over the game. Some of the kids were very adamant that they knew where a tile was and had to be reminded to share and let other players have their moment.

The other thing to be aware of with Farm Rescue is it can be fairly luck dependent. As you are rolling two dice to determine which animal you will flip, it’s entirely possible to flip the same animal over multiple times in a row if that combination keeps coming up. However, the gameplay in general is fairly light, and the kids I played this one with seemed to enjoy flipping a tile they were 100% sure on, so your mileage may vary on that point.

Finally, the production values in Farm Rescue are really good. The wolf and farmer are painted miniatures that I could see little kids playing with outside of the game. The rest of the components are of a nice quality that should hold up well to the abuse kids can force upon a game.

While Farm Rescue isn’t going to be a title you will be pulling out on game night, it does make for a good children’s game. All of our little testers enjoyed their plays of Farm Rescue, and they seemed to delight in choosing the right tile. I do think this one is going to be primarily appeal to the lower end of the age range (which starts at 4+). Yet Farm Rescue’s simply gameplay means you can set it up for your kids and let them go at it on their own, giving you a few moments of quiet before the next meltdown occurs.

Misses:
• Kids may need to be reminded to let others have a time to shine