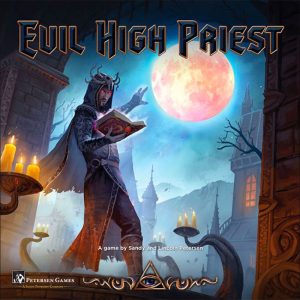 Here. Review this. These three words were not spoken aloud. They just… formed inside my head.

I looked up to see Tony. He was dressed in a dark black, floor length robe, holding a candle in one hand and a copy of Evil High Priest in the other.

REVIEW THIS screamed soundlessly through my head. Also, you are now a Packers fan.
Without consciously obeying, I found myself moving, taking Evil High Priest from him and exiting his lair.

As I made my way outside, I looked down to inspect my new game, only to notice I was now wearing an Aaron Rodgers jersey.

Evil High Priest (EHP going forward) is a cultist (worker) placement game for two to five players. The game length varies based on the number of players, but once you know the rules a game can be completed between one and two hours.

Each player is a cultist priest in the same cult. You assign your acolytes to complete the usual acolyte tasks, such as collecting blood (don’t ask how they get it…), gathering treasures to fund the cult, and researching magic. The goal of the game is to become the Evil High Priest by having the most favor (points) with the Great Old One that is summoned at the end of the game. Yes, the world is destroyed, but at least you are at the top of the leaderboard when that happens…

The game is played over a variable number of rounds, each of which consists of two phases until the end game is triggered.

The two phases are:

When the last Elder Sign is shattered on the Cult Board, the game immediately ends and final scores are tallied. The player with the most points is crowned EVIL HIGH PRIEST.

EHP is a unique worker placement game. It is very easy to teach, especially to those who have played worker placement games in the past. For comparison purposes, it is Lords of Waterdeep in terms of complexity. What differentiates EHP from the rest of the pack is its combination of collecting and protecting resources along with the raid mechanism.

Unlike most worker placement games, your resources are not safe, and I am not talking “Jill places a worker to steal one resource” not safe. If you do not prepare well, you can lose ALL of your resources in one fell swoop.

You see, you have a sanctum board. All collected resources are placed in the Exposed Resources area unless you have constructed chambers that can hold resources. Unfortunately, only you, the cultist priest, can construct these chambers. So, you must decide – do I go into the world and gather more resources or do I stay home and construct chambers? In addition, many of these chambers also provide defense from raids. When a raid happens (more on this later), undefended raids start at the Exposed Resources area, destroys all those resources, then proceed on a set path through your seven available chamber spaces until it is either stopped by your defenses or destroys all your remaining resources. It is important to decide where on the path you will place the chamber, based on its defense and resource storing capabilities, as it cannot be moved once placed. This is one of the aspects of EHP that I really enjoyed.

As mentioned above, your priest is the only cultist that can build chambers. Each player has their own priest board. This board has three action spaces reserved for the priest ONLY – building the chambers (thematically labeled “Chanting”), recruiting more acolytes, and summoning monsters to protect your resources. The decision of how to use your high priest is another aspect of EHP that I liked.

Next is the cult board, which is the heart of the raiding mechanism. I LOVE this board. Like the chamber spaces, there are distinct paths to follow. These boards add significant replay value because each one has different paths, action spaces, costs, and themes (the base game comes with one double-sided board for Cthulhu and Black Goat). They also contain the thirteen Elder Signs that must be shattered to trigger end game. Elder Signs are shattered and claimed by a player by placing a cultist and paying the required resources. You also get to claim the Elder Sign – make sure you put it in your deepest chamber (if you have one) as they are worth the most points in the game! In addition, shattering an Elder Sign unlocks the next step in the path, so this, combine the value of the Elder Signs, adds a race element to the game which can be tense.

So how is this tied to raiding? Several of these spaces include the Raid symbol. When this happens, EVERYONE, including the player that placed the triggering cultist, will get raided. Dice are rolled for the raid, its strength is compared to your defenses, and then undefended resources are destroyed. This mechanism adds a level of interaction because you may hurry to trigger a raid if you notice one of your opponents has several resources sitting in their Exposed Resources area even though you might be negatively impacted if you do not have enough defense for your own sanctum.

Besides the cult and priest boards, there are two other boards where cultists can be placed for actions. One is the town board, which includes spaces for the standard collect resources, trade resources to get others, or take the 1st player marker actions seen in countless worker placement games.

The last board is the ritual board, which is not available until after the first raid. This board is unique because you need to invest cultists here for bigger payouts after they are there for two or more rounds. Strategizing where to place your cultists across these four boards is another facet of EHP that helps it stand out in the overcrowded worker placement genre.

Unfortunately, the biggest drawback to EHP is that it reminds me of the current generation of video games. You buy a game for $60 knowing that you will need to buy the downloadable content to experience the complete game. How does this relate to EHP? The instruction manual in the base game includes the details for the two expansions. You can see the new content that is available but not included in the game you purchased, and some of it is REALLY cool. For example, the base game only includes 15 identical generic monster cards, while the two expansions combined add 24 unique monsters with special powers. The base game includes a card display board that has rows for the chambers (base game), the unique monsters discussed above, and unique investigators (also expansion content only). The board looks odd sitting on the table with two-thirds of it being unoccupied.

Another issue for some gamers will be the raid mechanism because it does add a take that element to the game. More importantly, there is no catch-up mechanism included in the game, so in a four-player game, if one player has a poorly defended raid mid to end game resulting in the loss of all resources, while the other three do not, that player would effectively be eliminated from the game.

And while I am not a component elitist, the cards and personal player boards are a little flimsy. Good gameplay is what I care most about, which this game has, but I wish these were sturdier. Some of the art is good, while some of it is… not. On the plus side, we loved the cultist meeples!

Finally, this game is a space hog, especially at higher player counts. A total of FOURTEEN boards will be in use in a five-player game. While it looks impressive, if your gaming space is limited, you may need to play across multiple tables.

Evil High Priest is a unique take on the worker placement games that I enjoyed. I liked the balancing of getting vs. protecting resources, using your two different types of cultists on four different boards and, specifically, the race to shatter Elder Signs on the cult board.

Personally, I loved the raid mechanism in Evil High Priest, albeit at the risk of being severely hampered if it went poorly. The only drawback was the excellent content that requires the purchase of expansions. While not needed, they certainly enhance the base game. (SPOILER: expansion reviews are in the pipeline)

Hits:
• Balancing gathering resources vs. protecting them is an excellent game mechanism
• The cult boards bring another layer of interaction to the game
• Figuring out where to focus your cultists across the four boards is enjoyable
• Easy to teach, plays fast, and is a unique take on worker placement

Misses:
• Base game feels incomplete
• Can be a table hog at higher player counts
• Components, especially cards and player boards, could be improved
• No catch-up mechanism in place for players if a raid goes horribly wrong