Board Game Review by: :
George otelho

We review Etherfields, a cooperative, narrative adventure game published by Awaken Realms. In Etherfields, players are dreamers exploring the dream world trying to make their way though different gates. 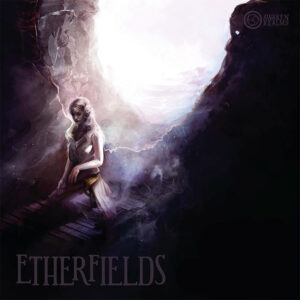 Etherfields is a mysterious narrative campaign adventure in the world of dreams, with a mix of mysterious story, deck building, escape room like puzzles, multiple endings, and character progression. Altogether it brings a dizzying amount of mechanics to the table. Each section will take 1-4 players between 60 to 120 to play through.

Players will choose a Dreamer with their corresponding deck and dive into the tutorial. During a player’s turn, each player will spend cards in their hand to create intent. Intent acts as your resource to move your model on the board, play other cards, interact with objects, and a myriad of other things.

There are three types of intent in the game: Awareness, Wrath, and Cunning. Each Dreamer specializes in the different use of intent to be better at combat, exploration, and card manipulation. Players will start with a pre-determined number of cards in their decks, but this will grow and change over time as the campaign progresses.

The board in Etherfields is made up of two different sections, the Dreamworlds Map and the Dreamscape board. The Dreamworld Map is your world board, while your Dreamscape map is for your slumber (random encounters) and your Dreams (missions). Each board is made up of tile cards that are arranged in a specified order. These tiles contain spawn points for monsters, clues, puzzles, and objectives.

Upon entering a Dream Gate, the party will spawn an all-new board and start the Dream, which will consist of escape room puzzles, monster encounters, and investigating clues. The story and effects on the tiles will be dictated to the players through the Secret Scripts book. Once the objectives are met, the Dreamers will be released back to the Dreamworld board, collect their loot, spawn the generic slumber map, and continue the journey.

The core game consists of 2 campaigns and requires over 40 hours to complete each.

Etherfields has a steep learning curve. My first suggestion is to not read anything in the rulebook except the set-up instructions, then jump into the tutorial mission. It does a great job at teaching you the micromechanics such as using your cards for actions and resources, and how to navigate the Dreamscape board. The rulebook for Etherfields is filled with beautiful artwork and packed with info, but its layout is problematic and confusing.

The deckbuilding aspect of this game is fun and can get very deep depending on which Dreamer you choose. Each Dreamer has a distinct play style that is built upon over time. I’ve greatly enjoyed being able to upgrade and strategize each deck to make up for the weaknesses of the other, and the game encourages this, allowing you to feel some control in the completely bizarre dreamlike world.

Once you master the basic mechanics of the game, you will be thrown out into the Dreamworld. The Secret Script books help you set up the game board and keep you on track, but it has its own problems. To use the Secret Script book, you must look for the corresponding numbered entry out of over 1,000 entries. This can really disrupt the flow of the game, especially when playing solo. There are also some minor writing errors within the book that can distract at some points as well.

Playing on the Dreamworlds map is quite confusing at first, as the game tosses you into the macro mechanics without much explanation. I think this is indicative of one of the major issues with Etherfields. It keeps adding more and more unique, distinct mechanics the longer the game goes on, requiring you to be constantly learning and remembering a towering amount of rules that are constantly in effect. Once you get into the groove of understanding them and the flow of the game, it does start to come together a little easier. Unfortunately, trying to introduce new players without restarting the game completely would be almost impossible.

The Dream Missions that occur once you venture through a Dream Gate are unique and some are quite creepy. I think this is a high point for the game, as it takes great pains to vary the Dream Gate missions and use mechanics in unique ways to make each dream feel unique and memorable. One important aspect to point out, that I greatly enjoyed, was how there were multiple paths in the story. You may not find everything on your first playthrough. Enemies inside of dreams and slumbers can also be dealt with in multiple ways. If you are not playing a strong combat-based character you can try talking to the enemy to see if you can defuse the situation. This is a great option I wish I could see in other games so player’s parties don’t always have to have a fighter.

The story of Etherfields is cryptic and unpredictable, following a loose central narrative. I can kind of see where it is going but I constantly keep getting yanked into unexpected turns and twists as well as dead ends. I personally enjoy the enigmatic nature of the story, but it could be a major turn off to some players who may want a tight cohesive narrative.

I am about 10 hours into the first campaign, and I have to say that the game is overall a joy to sit down and play. Once I finish a dream mission and get my loot I want to continue and see how I can grow my characters and what else is around the corner. While it may sometimes feel like the game is trying to squash a huge amount of mechanics into a dream or into the game itself, it works. The setting of a dream world is a perfect fit allowing for a flexible interesting way to incorporate rules and story. The Secret Script book and rulebook could use some attention and a re-work though. Creating a tower of rules over time may also be a turn-off to some gamers.

Final Score 4 Stars – A quirky, cryptic campaign game that sucks you in and makes you want to keep playing.

Hits:
• Dreamers are unique with a solid deck building system.
• Story is mysterious and fun.
• Multiple ways to approach Dreams and enemies.

Misses:
• Rulebook and Secret Scripts can be confusing.
• Rules are built upon over time, lots to remember.
• Some aspects are not fully explained at certain points when needed.