Note: This will be a spoiler-free review. 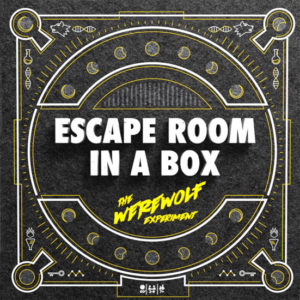 Escape rooms have grown in popularity in recent years, as evidenced by your Facebook and Instagram feeds filled with pictures of your friends experiencing the thrill of victory or the agony of defeat at the hands of these real-life puzzles. In the gaming world, 2017 saw many attempts to port the experience to a board game version, such as Unlock, Exit and Escape Room: The Game. Today, we will explore a new offering into this genre,  Escape Room in a Box: The Werewolf Experiment, to see if this one has what it takes to set itself apart from others in the genre.

Escape Room in a Box: The Werewolf Experiment is a puzzle-solving game for 2-8 players that takes under 60 minutes to play. Our play through was with 4 players.

This game takes the same format as your standard escape room: you have 60 minutes to complete your mission by finding clues and solving puzzles. This game puts you in the role of having to find the cure for a werewolf virus.

When you to start the clock, you unpack the Escape Room in a Box to find a bevy of materials, papers, locked boxes and the like, all which provide clues to be used in solving a series of puzzles in some manner in order to proceed further into the game. Along the way, hints become available at specific time intervals if you get stuck on a specific puzzle. In the end, solving the culminating puzzle allows you to discover the cure to the lycanthropy and win the game. If time runs out, or if you use too many clues (and are honorable gamers) then the game defeats you and you turn into a werewolf.

The main point to evaluate when looking at any game in this genre are the puzzles, and Escape Room in a Box delivered handily. A variety of pen-and-pencil puzzles, locked boxes, and other physical and mental puzzles like <redacted> and <redacted> gave our brains a good workout. The puzzles ran the range from very simple to extremely brain-bending, but were definitely not out of reach in terms of difficulty. One of the great aspects of the game was the interconnected nature of many of the puzzles. The presentation (or lack thereof) of important clues also provided excitement to the experience.

One feature of Escape Room in a Box that we overlooked was the integration with Amazon Echo, which provides timers, a soundtrack, and other immersive elements. Unfortunately, we did not get the opportunity to play with the Echo experience, so cannot comment on its quality. Just the fact that it is offered is the type of innovation that we hope to see in the future as technology like the Echo and Google Home become more popular and prevalent.

Another positive is its accessibility to both gamers, non-gamers, and non-escape-roomers alike. We played with 4 players – two were non-gamers, one of whom had never done an escape room, and we found there was no issue with anyone being able to jump right into the action.

Our experience also led us to another conclusion regarding player count: 4 players was the perfect number to play this game with. While we believe Escape Room in a Box would shine with fewer players at the table, any more players would lead to dilution of the puzzle experience, leaving each player with not a whole lot to do during gameplay. It baffles us that the publisher suggested that it could play up to 8; there is just not enough game here to support that many players.

One of our biggest concerns with the Escape Room in a Box is not the quality of the game itself, but rather the lack of replay value. While we understand that this is expected in this type of game, it is a rather steep price point when compared to other titles in the genre that provide multiple puzzles or are less expensive. One thing of note is that the publishers provide a guide for resetting the box and reprinting the paper puzzles for reuse by another set of escapees.

Escape Room in a Box: The Werewolf Project is a great addition to the burgeoning escape room genre. The quality and interconnectedness of the puzzles provided an exciting and enjoyable gameplay experience, with some unique twists and turns that give it its own individual flavor.

If you enjoy solving puzzles and have a group of friends that are of a similar mind, then we definitely recommend you check Escape Room in a Box out.

Score: 4 stars – a solid game with fun twists and clever puzzles, that is great for everyone.

Hits:
• Plenty of clever, interconnected puzzles
• Provides an equivalent experience of a real-life escape room
• Ability to reprint puzzles to reset the game

Misses:
• Price point for a single-play game
• App integration should be better advertised