We review Empires an economic, negotiation, bidding, and bluffing game published by WizKids Games. In Empires, players are trying to amass the most victory points through some shrewd recourse management and negotiation. 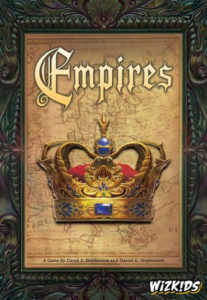 To start this review of WizKids’ Empires, I could attempt to hook you in with some fun facts about the 18th century imperial landscape or some interesting history lesson about how the decisions of the great-war machines of the 1700s affect the world we live in today, grudges passed on father to daughter, monarch to president. However, I will do none of those things.

Instead I am going to stress how much I despise party games (Empires is not a party game, just hold on, this is my soap box for the moment). As you may or may not have noticed from my previous reviews, I love the more thinky games out there, and while I love game nights surrounded by my closest friends, I do not have the gaming library to accommodate an entire D&D party and their significant others. During these occasions when everyone has RSVP’d “Yes” and my house is filled with the fragrant aroma of pizzas and Doritos, and warmed with the laughter of friends, I very nearly dread the walk to my game shelf to pull out Cards Against Humanity or Dixit or something else that has hid itself in the dark corners of my collection. These aren’t bad games, but they aren’t what I am interested in playing today. Well, dear Reader, Empires is the solution to my dilemma.

Empires is a negotiation, trading, and auctioning set collection game for 2-10 players that takes about 30-45 minutes to play. It generally plays best with higher player counts.

In Empires each player begins the game drafting a country card which has unique special abilities and starting resources. The basic rules of Empires require that resources are combined whenever possible to create what amounts to mini-resource-converters. The general conversions are bonds + gold = banks, meeples + goods = luxuries, and meeples + territories = industries. These converters must be satisfied in this order whenever possible.

Every turn, the luxuries will create supporters; the industries will create goods; the gold placed on the banks will be sent to the kitty; and the meeples without something to do will start revolts. Before I get to the Market Phase and War Phase explanations, let me stress – you can trade anything and everything in this game with the exception of your supporters (victory points) and revolts (negative victory points) and all agreements are non-binding.

The first round of bidding occurs during the Market Phase where players reveal the amount of goods they will commit to the market. This simulates supply and demand by using the market track; as more goods are placed into the market the price of each good is decreased. After discarding the promised goods and collecting income, play moves to the War Phase.

The War Phase has players blindly bid on the number of armies they will dedicate to obtain a War Card. War Cards are the only way to add additional meeples to a country and drive the whole converter engine. Conveniently, one army costs one gold, so players are blindly bidding on how much gold they will throw away to win a war. Negotiations ensue, promises are made, broken, and then everyone reveals his or her bid. From highest to lowest bidder everyone takes his or her War Card of choice from the pool.

Rinse and repeat the round 5 times. The person at the end with the most supporters (minus revolts) wins the game.

Let me start by stressing how great the component quality is in Empires. The 2 inch deep game box arrived at my house absolutely filled with thick cardboard to punch. WizKids put the effort in and there is not a single piece of flimsy cardstock in this box. This is a game that is meant to be handled for several years of play-throughs with components that are meant to last.

The rulebook is simple and easy enough to understand, but the game is so open-ended that initial play-throughs are a little tough. It isn’t that the rules aren’t clear, it is that pretty much anything goes. The bidding phases (market and war phases) which make up the majority of the game are completely open to negotiation. Players can trade everything except support and revolt tokens; even nation tiles and bidding number cards are fair game.

I’m not someone who usually enjoys auction games (the closest I really get is Stockpile), but the ability to negotiate current resources or future turn actions or just about anything else, makes this among the most enjoyable bidding and auction style games I’ve played. The ability to negotiate puts my preconceptions of auction mechanisms on their heads. I might not be able to accurately value what I want, but I can try to silver tongue those resources into my play area another way.

Case in point, the Market Phase economy is squarely rooted in supply and demand. Prior to revealing the number of goods they will sell to market; players negotiate to keep supply down and value high. The fewer goods in the market, the more each individual good is worth. As the gold earned here will be converted (at a rate of 1:1) into armies, the market feeds the tension of the War Phase. It behooves every player to get everyone else to bid low. The deals being made across the table during this phase greatly affect the coming phase and even future turns; so it shouldn’t be too surprising that the most enterprising among my gaming group lied through their pearly white smiles from the start, setting the tone for the entire game. It was funny, it was frustrating, and it was all in the name of the game. I loved it.

The same negotiate, plan, reveal process used for the Market Phase is used during the War Phase with one major difference. Since the War Phase is resolved from the highest bidder to the lowest bidder, there can be no ties. To mitigate these situations, the lowest bidder in the War Phase takes on the role of the Diplomat to decide the winner of each tie in the round. This simple addition creates far more depth to negotiations and potential strategies as players attempt to predict whether their opponents are vying for their first choice of the conflicts, or for the role of the kingmaker, or maybe just the chance to exact revenge from the previous Market Phase.

Empires lands a little too far from the definition of a Party Game per se, but this is the game I want to play at a party. As a person who doesn’t prefer (read: hates) party games (just try suggesting Joking Hazard one-more-time), the high player count, fast gameplay, and simple rules mean that everyone can be made mostly-happy. It isn’t the best economic/negotiation game out there, but somehow I found that the ruleset, with its focus on trading anything, pulled it all together nicely.

Truth be told, Empires won’t be for everyone. As with any game with the aforementioned mechanisms, you cannot play it with just any group. I found that while one of my gaming groups found the fluidity of alliances and sub-optimal play in the name of the meta-game frustrating, the other group was able to dive right in to Empires and laugh the whole way through. The below score was a half point lower for one group and a half point higher for another. Ultimately it was this reliance on “the right gaming group” that convinced me to average these together.

Final Score: 3.5 Stars – The best way to take over the world and stab up to 9 of your friends in the back in 45 minutes or less.

Misses:
• Gameplay a little too open ended for some groups
• Players who don’t enjoy the “meta-game” may find the negotiations frustrating
• Could blend the lines between game and activity if a strict round limit is not enforced.