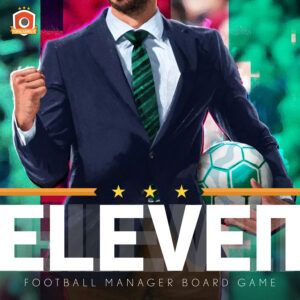 Are you ready for some football!?!?! Not the kind Hank Williams Jr. was singing about though. European football. Soccer, if you will. The beautiful game. And today it can be played on your tabletop. But rather than just simulating the game itself, Eleven goes all in and will have you controlling every aspect of your football club. The stadium, the board members, and the sponsorships. Matchday is important, but it’s only a small piece of the puzzle.

It’s available to back today on Gamefound, so let’s dig a bit into how it plays and see if it’s for you.

There is quite a lot of depth and complexity to Eleven, so we are going to cover the broad strokes here. But the work-in-progress rulebook is available on the project if you want to read through all the details for yourself.

The game starts out with a draft of board member cards. Your board will give you a special ability and also impacts how your team will deal with events that happen during the board meetings. They can help give you a direction from the get-go on how to make the most out of your team.

Then you’ll play through 8 weeks. Each week starts with the aforementioned board meeting where you’ll draw a card and have to resolve an issue or opportunity for your club. This involves rolling a six-sided die where the resulting roll will indicate how each board member votes. If you have spare fan support you can spend it to reroll a die to help get the desired results.

Once those suits in the boardroom are finished the week gets off to a proper start. You’ll get three actions to take during the week that can be used to acquire players, recruit a youngster, hire staff, or upgrade your stadium.

While sponsorships and stadium upgrades can give you an influx of money or special abilities, recruiting players is obviously required to win the match. Each player has a position and a strength. When matchday comes around, after your three actions, you place your players on the pitch arranged in 9 different zones. You won’t necessarily be doing this blindly as you’ll have a scouting report for the team you are up against. Perhaps they have strong attacking players in the midfield so you need to place defenders there to try to limit their scoring.

Once set you’ll flip over the opponent’s scouting report and see their attacking and defending strength in each of the 9 zones. For each zone where you have more attacking than your opponent is defending, you score a goal. And the same is true for your opponent. After resolving each zone whoever has scored the most goals wins the match and three points on the league table. But not everything about soccer is predictable, after the game, you’ll have to roll a die again and deal with potential consequences from the match (again, rerolling with fan support). This could be something beneficial like increased fan support or something terrible like your players getting injured. The odds of something good happening increase when you win, but there’s still a chance of bad outcomes regardless.

Winning matches is the primary way to score victory points as your standings at the end of the 8th week will translate to VP. You can also do so by training players and then selling them. You’ll also score bonus VPs for having sets of staff who work well together and various stadium upgrades.

Sports-themed board games are hard to come by. And most that exist are some kind of dexterity flicking game or a table-hogging miniatures game with rulers and huge instruction manuals. I, for one, have been begging for a eurogame that takes a step back and includes both on and off-the-field management of a sport. And Eleven certainly gives us that sandbox-type game to play in.

While there is still a lot of development and changes happening to the game even during the campaign, Eleven really feels like it encompasses everything you’d expect in running the football club. Maybe you have to spend your actions getting more stands in the stadiums or securing a sponsorship for stadium adboards. This eats into the time you’d otherwise be able to spend recruiting or training players.

So you start acquiring staff and spend some of your operational time using them to help perform additional actions. A fitness trainer can come in and get your team in top form in no time. And hopefully, that will lead to success on the pitch. If it doesn’t… well, sell them off to someone else and just bank some victory points that way.

There are additional rules coming for goalies and a longer season with a winter break in the middle. A number of available expansions including more players and stadium upgrades. There will really be no shortage of content available for Eleven.

While we’ve only been able to dig into a prototype game with a small portion of the content that is eventually coming, Eleven certainly seems like it will deliver a lot of the experience sports fans want to see on their tabletop. As a fan of economic euros, it’s a great mix of things I enjoy and it’s been great to follow the campaign so far and see the changes and additions that Portal is working on.

If Eleven sounds interesting to you it’s available to back today on Gamefound.