Dungeon Busters is a fun microgame that tasks a party of adventurers with killing and looting monsters in three dungeon levels. Through clever cooperation, the heroes just might escape with riches aplenty in tow, but beware: a touch of the prisoner’s dilemma pits hero against hero as each player tries to take the largest share of the booty. 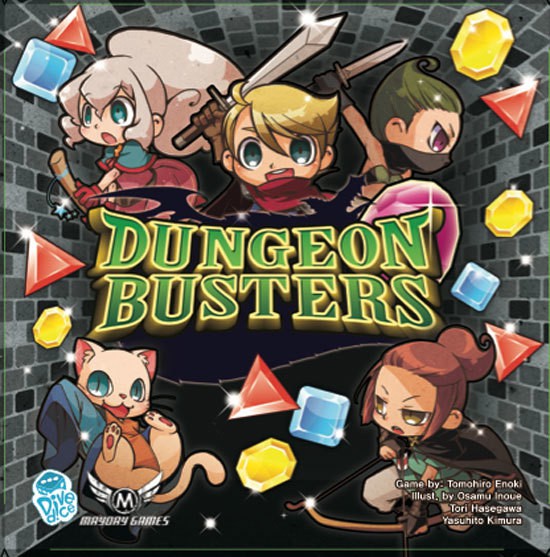 If you’ve ever had a marathon of big box games, then you are probably familiar with the special niche micro-games can fill. They can help players mentally reset, shake off some of that soot from the brain burn, and get ready to jump into something completely different. These smaller games are also great for simply teaching different mechanics as they tend to focus on just a couple at a time. Dungeon Busters is one such game.

Dungeon Busters is a hidden action bluffing card game for 3-5 players (that plays best with 4) and takes about 20 minutes to play.

Dungeon Busters tasks a party of adventurers with killing and looting monsters in three dungeon levels. Through clever cooperation, the heroes will escape with riches aplenty in tow, but beware: a touch of the prisoner’s dilemma pits hero against hero as the adventurer contributing the least amount of effort to each battle takes the largest share of the booty.

Component-wise, the card stock is of good quality. The copy I reviewed contained the plastic gemstones ($9 from Mayday Games) and they were exactly what you would expect (think Pretty Pretty Princess). I did appreciate how portable the box was; it held all cards with plenty of room for the gemstones and the cardboard “first player” token.

The artwork on the hero and monster cards is definitely on the cuter side of anime (the Cat Priest received a lot of love). The Power Pack contains only 5 cards and while it may not sound like much, the game is not complete without them.

The set up is very simple. Monster cards are separated into three piles by their difficulty (I, II, and III) as identified by the back of their cards. Players choose one of the five heroes (Knight, Mage, Thief, Priest and Ranger). Each hero each has a set of cards with the numbers 1 through 7 on them. If the Power Pack is used (and let me stress here that you should use the Power Pack), the number 2 in each deck is substituted with the relevant hero’s special card.

Similar to Munchkin, the general framework is: meet a monster, win or fail the monster encounter and receive or lose loot.

At the start of the turn a monster card is revealed from the dungeon deck. Each monster card has a strength (i.e. number to beat) and one or more sets of gemstones to be awarded if the monster is defeated. Players then discuss strategy (barter, argue, etc.) and place one of their numbered (1-7) cards face down in front of them. Once used, the heroes’ numbered cards cannot be used again until the next dungeon level. Cards are revealed after everyone has placed. The identical numbers played by multiple heroes are thrown out and unique numbers added up.

Assuming the heroes put aside their differences and the sum of their parts exceeded the monster’s strength, the monster is destroyed and gemstones are awarded to the heroes. Here is the kicker, the player that contributed least to the combat is paid the highest scoring set of gemstones. Conversely, the strongest fighter in a combat may not receive a reward at all.

However, if a monster is not defeated, the lowest contributing player has to contribute her most plentiful color of gemstones to the “spoils” pile. This is awarded to the next group of players to win an encounter.

The game is won by having the highest number of points. Points are earned by collecting sets of different colored gems (blue, yellow and red).

Dungeon Busters is a fun little game that has everything needed for a game night palate cleanser or a children’s gateway game. It is short and simple with the undercurrent of some more complex mechanics at work, namely game theory and the prisoner’s dilemma, but to get into the nuance is to give the game more credit than it deserves. It’s greatest strengths are also its most striking weaknesses.

Dungeon Busters relies on the relationships within the group of players, and, like most bluffing games, flies or flops based on the personalities and poker faces. There is not much going on here. It is minimalist and micro in its truest form, and, for new gaming groups or a friendly local gaming store meet-up with strangers, this reliance on interpersonal relationships and communication between players may prove to be either a go to ice breaker or a terrible failure.

Communication is the meat of the strategy that does play into this game despite the focus on the “gotcha” gameplay. Which leads to my next point, depending on how you feel about Munchkin, you will fall into one of three camps – Dungeon Busters is either Munchkin minus the obnoxious personality, or the boring younger sibling of Munchkin, or is just as much of a game for jerks as Munchkin.

I admit, a deep dive into Dungeon Busters isn’t really fair, as the game was clearly not designed with anything more than a dungeon crawl microgame in mind. However it fills this role well. Weighing the options of playing the lowest card to win it, sticking with the negotiated strategy to take second or third place, or rolling the dice on playing a duplicate was fun and could get a little brain-burny (very little) – especially when players have to consider all of this within the context of whoever else is at the table.

Ultimately, Dungeon Busters filled the 20 or so minutes it took to complete with some good laughs and frustrating gotchas and after a couple of games we had digested our previous bigger-box game and were ready to move on. Dungeon Busters was the game night palate cleanser.

I enjoyed Dungeon Busters the first time – and even the second time. It lacked the depth I was really hoping would make it unique, but it did what it set out to do well. There aren’t going to be a Dungeon Busters marathons in my gaming group, but it might come out again between some heavier cardboard.

If you’d like to get a copy of Dungeon Busters, you can clean your game night palate for about $15.

Final Score: 3 Stars – The amuse-bouche, but not the meal. Dungeons Busters works best in small amounts, but there is still fun to be had here.

Misses:
• Lacks asymmetrical play without the expansion
• Can get a little long and repetitive by the end 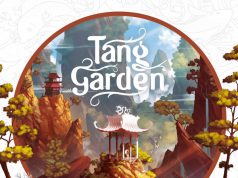