We reveiw Dungeon Bowl, a new edition of this fantasy-themed sports game from Games Workshop. In Dungeon Bowl, players are hunting around the dungeon, looking for the ball and trying to score points. 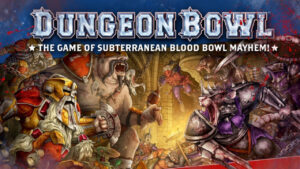 Dungeon Bowl is what happens when the wizard colleges debate about which is the greatest among them. Using their different teams they settle the disagreement away from the general population, resulting in an insane labyrinth of dangerous rooms, portals, and traps in which two teams must first find and then score with the ball.

Set in the old world of Warhammer fantasy and heavily borrowing from Blood Bowl, Dungeon bowl combines the sports mechanics of Blood Bowl with a dangerous dungeon crawling experience.

The very first part of playing Dungeon Bowl is constructing the dungeon. There will always be two end zones for each team to score, but other than those players work together to set up a fair and chaotic dungeon using whichever room tiles they please. Each tile has separate rules that will come into play later while models are running through the dungeon trying to find the ball. Once the dungeon is constructed, players take turns placing the chest, one of which holds the ball used to score and win, and the teleporters used to zip around the dungeon as fast as possible.

While there are multiple teams to choose from this set of Dungeon Bowl comes with the college of fire and the college of shadow. Fire focuses more on brute force whereas the college of shadow focuses on movement and dexterity. Sometimes there is a drafting process for each team where you are given a certain amount of gold to select which type of players you want on your team with more powerful characters costing more money. Different models have different stats and abilities which helps determine how much they cost to have on your team.

Players then take their pre-chosen teams and deploy them in their endzone and then place their dugout behind with how many re-rolls they have indicated on the dugout board.

The goal of the match is to scour the dungeon, avoid enemy players, find the ball in one of the chests, and successfully run the ball into an opponent’s endzone to score and win the game. During the game, players activate their models to move across the board and take different actions trying to find the ball until a turnover occurs at which time the other player starts taking their actions. Different events cause turnovers such as dropping the ball, having models fall over or get knocked down, or missing a pass.

During their activations, players can move, pass the ball, hand off the ball, throw a teammate, block, blitz, foul, or use their miniature’s special actions. While players are looking for the ball, they can use the teleporters located throughout the dungeon to get to the chest faster. When a player reaches the chest, it could either contain the ball or explode. Once the ball is found players must rush to the opposing endzone using any means possible to score.

For my first game, I played against the college of fire as the college of shadow. I had some really fast units that could dodge pretty well so I was super aggressive in trying to hit the teleporters as fast as I could to fill the dungeons with my models.

One of the mechanics I enjoyed was trying to position my models in such a way to have board coverage but to also be able to intervene. The randomized hallways and rooms really added to the tactical aspect of where to keep my players. If I placed them to far away from each other passing and offensive support would be lacking. To close and I would be scrambling to mount defensive plays. Another highlight for me is that each model on each team has individualized stats and rules that tie directly to that units role on the field. I love knowing that my runners are going to be more agile and I don’t have to guess at their stat lines to make quick decisions.

Some of the misses that came into play where the randomization of the portals and the chest. The portals teleport you randomly which can cause some crazy chain reactions if any other models are standing on them. They have a sort of high risk, high reward aspect. It makes it almost impossible to plan to utilize correctly. The other aspect was the ball hiding in a random treasure chest. My team was faster so I was able to engage the treasure chest before my opponent which actually resulted in multiple injuries to my players as they exploded.

Dungeon Bowl can be a really slow methodical game until someone finds the ball. My opponent and I were getting a little board for the first few turns. I will say though that once the ball was on the field everything got really hectic really fast. Every activation started to matter way more than when we were cautiously moving about the dungeon in search of the ball.

While I am not the biggest sports fan, I did enjoy some of the unique sports mechanics of Dungeon Bowl that were added to the dungeon crawling aspect. Having the bouncing mechanics for when the ball is dropped put some actual stakes on making passes and tackles. The flavor of the different colleges that came in the box really made me want to see how the additional teams played on the field.

I felt that the time spent looking for the ball was a bit slow, even if opening chests is exciting, most models just kind of meandered their way around. Once the ball was found thought the game became a race to see who could outmaneuver whom. I could appreciate the fantasy aesthetic, but it did feel a little slapped on for the teams. Overall, this is a great game that sports fans can really appreciate as it mingles a traditional dungeon crawl with rules that feel at home in almost any sporting arena.

Hits:
• Once the ball is found the game becomes much more frantically fun.
• Each team has flavorful abilities on their models.
• Dungeon is highly modular, and the room rules help add to the interactions.

Misses:
• The game can be slow until the ball is found.
• Random chest and random portal mechanic, while fun, can really be problematic to certain teams.
• Rules can have a learning curve and could take a bit to remember.
• Sometimes the action can be isolated to two models.