We review Dragonrealm, an area control and hand management board game published by Gamewright Games. In Dragonrealm, players are trying to control the most realms in the game to earn victory points. 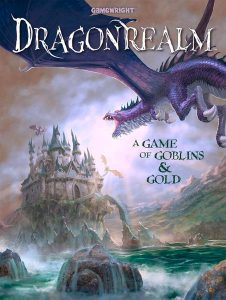 Gamewright is a publisher with extensive experience in kids games and lighter weight card games. They typically bring to market family friendly themes and ultrabasic gameplay with just a drop of heavier “gamer” decision making. Dragonwood, their 2015 title that featured card + dice play with adventurers out to capture creatures was a success that has now bred a sequel.

Dragonrealm is the follow-up that seems to dip even further into gamer territory. It’s a hand management and area control card game for 2-4 players that takes 30-45 minutes to play. It’s definitely best with 3 or 4 players.

Much like Dragonwood, players represent adventurers out to investigate various areas of the kingdom, aka Dragonrealm. Players start with a collection of hero figures which, if they’re successful, will be placed on cards representing areas to explore. Players who manage to have the most figures amongst all spaces on the card will collect coins (points) when it fills up. Doing so also earns a chance to get a set of bonus points at the end of the game from having the most Dragonstones.

Each turn, players will be drawing cards or playing cards formed as a set. Sets can be a run (1,2,3 etc.), a color set (one or more blue cards, or a number set (two 3’s, three 5’s, etc.). For each card in the set, players will roll a die as an explore roll trying to exceed a target number listed on the area card. Depending on what type of set the player used, the target number may be easier or harder to hit. If a player’s roll equals or surpasses the target number, they get to place a figure on the card. If they fail, their figure goes to the Adventurer’s Academy for training, and they can try again next turn with a bonus.

As players are drawing cards to their hands, additional “Goblin” cards may be drawn that indicate a goblin figure overruns a space in one area. Players add a goblin to the area and continue drawing cards.

If an area ever fills up all its spaces with figures, that area scores. The player with the most figures gets the number of coins specified on the card. The player with the second most gets a lower value. Ties result in splitting the value. This could also have the effect of goblins winning the area.

However, at the end of the game, players compete for a 5-coin bonus based on who has collected the most Dragonstones as indicated on their acquired area cards. Players will calculate that into their totals and whoever has the most coins wins.

Dragonwood was a lighthearted game with some probability math behind it. Dragonrealm is no different. It scratches the same itch but does so with a different core success mechanism. For this reviewer, it’s a welcome change. The gameplay is quick while staying competitive and tense.

The overwhelming positive is the strategy and time-pressure as players try to get their adventurers onto the various spaces. Judging how well the dice rolls can go based on the sets of cards in hand is tricky, and in this title, you don’t win outright with a roll. Adding adventurers to existing areas takes longer term planning. That’s the hallmark of this more advanced and challenging game.

The goblins adding to the time pressure is also a welcome twist. This ensures that an early lead on successful die rolls matters and that solitary figures on a card aren’t just wasted. However, the goblins also operate as a pseudo additional player since if they have the majority of spaces on a card, they win the area’s coins.

Finally, what’s changed for better or maybe worse is the way in which players acquire magic items. In this game, players acquire them at the start of the game (maybe they’re more experienced?) and can use them for just the right moment. There’s also an included version of play that allows players to buy magic items at “Adventurer’s Alley”. Both modes create a more balanced playstyle rather than the loot-grabby plays of Dragonwood. Depending on what players enjoyed from its predecessor, this might be a killjoy.

Dragonrealm is a solid area control and card play game. It has a whimsical feel and superb art while retaining the crunchy bits from its predecessor. As an area control fan, this reviewer definitely feels like Dragonrealm is the better game when compared to Dragonwood. It’s not as cute in terms of creatures, but it’s got a more advanced game structure and strategic rewards for a seemingly “kids” game.

Final Score: 4.5 Stars – As a light romp through a world of adventure locations, Dragonrealm reprises the success of its parent and solidly accomplishes new goals.

Misses:
• Some randomness but options for mitigation