We review Dive, an action programming and race game published by Sit Down! games. In Dive, players are racing to the bottom of the ocean to retrieve the mystical rock. 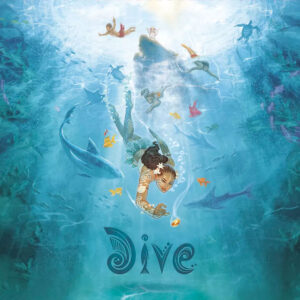 (Please note that this review is based on a publisher prototype and not the final published version of the game.)

When I was young, my family was fortunate enough to have a small backyard swimming pool. One of my favorite activities was to throw items into the water and “dive” down to gather as many as possible. I’d test my lung capacity trying to gather all of the different items while a friend or family member kept track of the time. It was a fun diversion, a chance to cool off during the rare summer heat, and a way to experience an underwater world near the safety of my home.

Enter Dive, the newest game from publisher Sit Down! (Magic Maze, Ekö), which taps into this childhood feeling of diving deep and exploring watery depths. Dive is a lightweight, 30-minute family game of exploration for 1 to 4 players. Let’s jump in together and see how long we can hold our breath.

The ultimate goal in Dive is to retrieve the sacred stone that has been thrown into the ocean by the village elder. Successfully salvaging the stone occurs when the number 23 is reached on a scoring track. This race mechanic encourages players to balance navigating the dangers of the ocean with kicking deeper into darker waters. The game features a central component of thirty-six transparent Ocean cards that represent each layer a player swims through as they seek the stone. Dive also utilizes light programming and push your luck elements.

Before a round begins, players will take a moment to inspect the central transparent Ocean card stack. Players specifically look for layers in the ocean that may host:

The transparency of the Ocean cards will make some layers easier to see, but there are several randomized elements (e.g., seaweed, starfish, a massive whale) that will obscure lower layers. Also, the deeper the layer, the more difficult the details are to distinguish.

A round in Dive is comprised of three phases: Program, Dive, Rest.

Players Program secretly behind a screen by simultaneously placing Air tokens numbered 1 to 5 on their Diver board. The Diver board has five levels of depth and these correspond to the top five layers of Ocean cards that may be revealed during the round. The Air tokens are double-sided, one showing a standard number (used to compete for turtles and manta rays) and the other showing the same number and a shark icon (used to protect against sharks and compete for shark combinations).

The objective is to descend as deep as possible while matching your placed Air tokens to what you find on each Ocean layer. Higher numbered Air tokens can be used to win turtle and manta ray movement benefits. For example, if the third level appears to have a turtle, it would be wise to program a higher-number Air token, in hopes of winning the advantage (e.g., green turtles equal +1 movement).

When players Dive, each layer of the Ocean is drawn and evaluated. The Dive phase continues as long as players have programmed correctly. When a turtle or manta ray appears, players compare the total number on the Air tokens they’ve used for the corresponding layer and the highest total will receive bonus movement on the Descent board (scoring track).

As soon as someone has incorrectly predicted or failed to protect against a shark, their program is broken and they are unable to continue further that round. All other players continue until either all Air tokens are evaluated or they incorrectly program.

During the Rest phase, players move on the Descent board the number of spaces equal to the depth they reached on their Diver board. If a player has reached or passed space 23, they win the game.

Dive also features a solo mode against an automa deck (The Village Chief), as well as a simplified rules variant for younger children (game is age 8+) and a companion module that allows players to take powers with them into the depths.

As a light family game, there is certainly a level of enjoyment built-in. It can be entertaining trying to determine the layering of the Ocean cards while also wondering if your opponents are seeing the same thing as you. Will they gamble for extra movement from that turtle? Or will they forego the extra movement to try to dive deeper? The hidden programming and a manta ray catchup mechanic also add suspense. This is a fast game, one where once finished, you can shuffle up the Ocean deck and easily give it another go.

The core concept of Dive revolves around the Ocean cards. They are the reason the game exists, so the question becomes: does this attempt at using transparent cards stand the test of time?

The answer will ultimately revolve around your family gaming group, but I tend to fall on the side of this being a game you’ll play heavily for a day or two out of the box and then forget it exists on your shelf. There are not enough additional elements to keep the game engaging beyond the novelty factor that comes with gazing into the depths. Unavoidably, kids will begin to memorize patterns in the Ocean cards over time, making the replay easier for those who’ve played the game more often. Doubling the amount of Ocean cards and leaving a certain number out each game would’ve been a great way to increase replay value.

The hidden programming may be the mechanic highlight here, as it brings a fresh approach to a lightweight game; however, there’s not enough built in to make it viable long-term. Adding the solo deck to the game can infuse complexity into each round but doesn’t make up for the fact that the game can become stale on its own. As well, the addition of the ocean friends as asymmetrical powers is a shallow attempt to add further variety.

While this review (and included photos) is based on a prototype, the final components are eye-catching. The artwork is bright and playful, and the transparent cards are a great representation of the ocean waters. That said, your mileage may vary with regard to how well your group can visualize each layer of these cards. This is a game where quality lighting is essential. The rulebook adds a variant that allows for the use of a flashlight to assist with seeing each layer, but it doesn’t help that much. Also note that the two colors of turtles are red and green, which makes them very hard to distinguish for those with colorblindness in this spectrum.

Dive uses a fresh theme that melds well with its core concept—the transparent Ocean cards. Unfortunately, there’s not enough here to continually pull a family in. Children will marvel at the initial challenge, and this may provide early gamers their first look at programming and push your luck elements. But only as a precursor to more advanced, risk-taking designs.

Final Score: 2 Stars – Much like the theme of this game, the light will shine the brightest during the early stages but will quickly dim with repeated plays.