We review Dinner in Paris, a pattern building and area control board game published by Funny Fox Games. In Dinner in Paris, players are building restaurants and terraces in Paris trying to earn the most income. 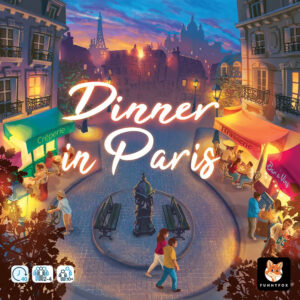 I had the privilege of visiting Paris years ago while on a backpacking trip but unfortunately it was during winter weather, so I didn’t have the opportunity to experience the trope of sitting outside a cafe on the terrace. When this game came out I, was drawn to the box cover art (as many of us board gamers often are), the setting in Paris (it’s been long enough since that trip that I’m definitely in a reminiscing mood) and was curious about the 3D gameplay. Any time that you can bring what normally is a very flat tabletop experience to life, I’m game.

Dinner in Paris is a territory building game for 2-4 players that takes about an hour to play. The best experience is with 3 players for the challenge of navigating terrace placements (which in my opinion is the best part) without the annoyance of overcrowding.

In Dinner in Paris, players try to become the best restaurant owner in the new Parisian square by building restaurants and adjacent terraces. New construction, if it meets certain conditions, can earn players victory points for Objectives and Majorities.

Players have their own player board that comes with embedded terrace tiles and income track. Nearby they will also have property tiles that will be used later to designate their restaurants, a hand of 4 Resource cards, and two Objective cards. They will pick one Objective to set as their own Personal Objective, while the other becomes a Common Objective.

A game round has 2 phases: the player will draw a resource card, then choose 2 of 4 actions. The four actions available to the player are Draw a Resource Card, Open a Restaurant, Build Terraces, and Complete a Personal or Common Objective. This means if the player wishes to draw 3 Resource cards on their turn, they can.

To open a restaurant, the player must discard the necessary ingredients shown on their player board from their hand. Then, they take the corresponding restaurant piece and place it on the building row of the square (the location of the row varies based on player count). The player will mark ownership of the restaurant by placing a Property tile of their color onto the roof. Restaurants in the game are component limited so if there is no available restaurant of that type, you cannot build it.

Restaurants, except for the Friterie, provide income to be used in later turns to build terraces. Terrace tiles are removed from the matching restaurant row on the player’s board and then placed orthogonally adjacent to their restaurant. The fun part about figuring out the puzzle of placement is that terraces of different restaurants cannot be orthogonally adjacent even if they belong to the same player. Consequently, mitigating overcrowding and planning ahead is crucial. One way to decide what direction terraces should extend is to check where there are Pigeons, as placing a terrace tile on a Pigeon space allows the player to draw a Pigeon card which has varying in-game benefits to be played immediately or on a later turn.

The end of the game is triggered when one of the following 3 conditions is met: players collectively place a certain number of restaurants (varies by player count), a player placed all their Terrace tiles from 2 restaurant categories/rows, or it is not possible to place more restaurants or terraces on the board. Players then finish the round and calculate their scores based on victory points from built restaurants, terraces built, majorities, and completed personal and common objectives. Any incomplete personal objectives are deducted from the player’s total score. The player with the most points wins, and ties are broken by the number of terraces built.

Once you get into the flow of how a game round works, Dinner in Paris is incredibly easy to pick up and remember for future plays. There are some games that have very difficult setups or phases that are hard to grasp, but this game is smooth without being too simple. The rulebook itself is well written, with relevant examples to clarify most scenarios you run into. I think the only downside to setup is the Terrace tiles, which must be placed in the designated wells for each player board before the game can begin. It’s not a deal breaker in the end, considering how satisfying it is to remove them from the board when building terraces.

After a few plays of this game, it became clear that the deeper strategy past satisfying objectives was actually ensuring you take the majority from someone. This is not something I’m used to in games that look so cute and pretty! In games where I thought I was ahead; all it took was an opponent taking one majority from me to allow them to close significant point gaps compared to anything else and secure victory in the end. The pacing is about the same when simply paying attention to just your own restaurant and terrace building, so the key is being able to respond to someone racing ahead. My one complaint about assessing the board properly is that you’ll likely need to stand up or wiggle around to see where terrace tiles are placed because the restaurants are tall enough to partially block the full view.

I was also pleasantly surprised at how balanced the income was and how points scaled based on restaurant category. There are four different categories: Friterie, Fruits de mer/Crêperie/Pizzeria, Grill/Bar à vin, and Brasserie/Restaurant gastronomique. The first category is easy to build and get started on terraces right away to fulfill objectives. The last category can take several turns to complete because it requires so many resources but has the highest return on income and terrace points in the game. I’m still learning how to balance the availability of resources in my hand versus patiently waiting for the opportunity for building a bigger restaurant, but it’s quite the pleasant learning experience and not frustrating at all to keep trying new strategies. Being patient enough to think “Well, I have the resources for a Pizzeria now but if I just try to wait a few turns I could invest in a Restaurant gastronomique instead” certainly only comes with more playthroughs (and I’m here for it).

Pigeon cards acquired while building terraces can be extremely helpful if it gets too crowded and time is running out, but I didn’t find a need for it in a 2-player game. There is plenty of room to build out without intruding when there is only one other person, even with the smaller map. Not sure how thematic it is to build in the way of a pigeon and be presented with gifts, but I’ll definitely take it anyway.

With all this being said, my only two complaints about the gameplay were what seemed to be arbitrary point assignments to Objective cards and occasionally imbalanced benefits on Pigeon cards. It felt like these may have been a last-minute addition to the overall gameplay because some mechanics that were more difficult to execute were not rewarded in ways I expected. For example, some pigeon cards allowed you to open a restaurant with one less ingredient and based on my experience of how resource cards were distributed this could accelerate the success of future moves. Another example with Objective cards was for requirements on where terrace tiles were placed (e.g., next to streetlights) which requires the player to possibly ignore opportunities to take majority scoring since street lights are located on opposite sections of the square. These complaints are only really clear if you end up playing the game but are worth noting here.

I occasionally like being able to be surprised by a win or a loss. It’s hard to quickly calculate how many points a player is sitting on in this game since points can be acquired in so many different ways. Like I mentioned earlier, each of the three types of majority scoring options in the game can be the source of significant swings in points so that is the easiest to track if you want to. However, if you’re more of a relaxed player like me, it can be more exciting to just do your best turn-by-turn and see how things go.

This game is for anyone looking to have an eye-catching game to bring to the table while getting into area majority shenanigans with opponents. If you’re finding too many games you have fall flat in more ways than one, these striking restaurant components and colorful terrace tiles will be a great addition to your collection.

Dinner in Paris is easy to pick up and remember how to play in the future. If you can be patient with individually placing terrace tiles on player boards, the overall setup is straightforward from there. With several ways to earn points and many opportunities to try different restaurant strategies, end-game scoring can be exciting to see how turn-by-turn decisions can swing in your favor (or not). At least the pigeons come bearing gifts!

Hits:
• Straightforward gameplay with deep strategy
• Pigeons are not pests
• Immersive components and game board