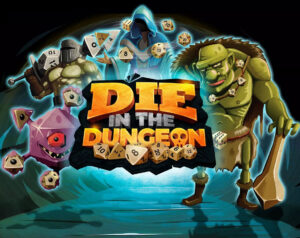 After 2020 became the year that I fully embraced solo games, I’ve been more on the lookout for new ways to game on my own. And as dungeon crawlers are one of my favorite genres, I was pretty excited to try out Die in the Dungeon. It’s a solo, reverse dungeon crawl where you take on the role of a big bad monster, killing heroes as you hack your way through the dungeon. Sound interesting? Let’s take a deeper look.

Die in the Dungeon features over a dozen scenarios that will take you through a campaign of sorts. Once you’ve set up your chosen scenario and chosen a monster to control, you’re ready to get rolling. Your turn is taken over a series of steps.

1. Gain an ability point (4 max)
2. Optionally rest to convert up to 3 time points to health
3. Spend a time point to choose an adjacent unexplored tile and flip it over, immediately resolving any effects.
5. If the tile isn’t a combat encounter, your turn ends and you go back to step one for your next turn. If it is a combat encounter, battle commences.

In combat, you’ll be fighting one or more fighters, rogues, wizards, or clerics. At the start of a combat round, you can spend ability points to use your special powers. After that, any fighters, rogues, or wizards will attack you (in that order). They attack by adding up all of their values for their relevant stats (strength, agility, and magic respectively) across the whole party and roll a matching level die. If the result is higher than your matching stat (or they roll max on the die), you lose a health or stat point (your choice). Clerics never attack, but must always be killed first. Apparently, they are redshirt clerics.

Then you get to attack, which works in a similar way. Choose one of your stats, roll the matching die, and if you get higher than the heroes’ total value, you kill off one of the heroes (and gain an XP – experience points). This process repeats until all heroes are killed or you die. XP comes in the form of dice where once you’ve gained 6 XP, you gain a mini die that can be used to boost a die roll in the future.

Turns go by in this manner until you’ve died, run out of time, or completed the scenario’s objective.

Games from indie publishers can be pretty hit or miss in my experience. Sometimes you get a labor of love that just gets knocked out of the park (ala Clans of Caledonia), while other times a would-be publisher is in clearly over their head even though they had a good looking Kickstarter campaign (too many to list here, but Diceborn Heroes is an example). So where does Die in a Dungeon fall in that spectrum? Somewhere in the middle, I’d say. The game had some really good ideas, but sometimes fails in the execution. So let’s get to the why.

Opening the box of Die in the Dungeon and I was pretty impressed with the component quality. The dual layer boards are a nice touch for slotting in your dice, the dungeon tiles are a thick cardboard with a glossy overlay, and the standees are some of the best I’ve ever seen. They are made of a thick, chunky acrylic that for about the first time ever, doesn’t make me pine for the plastic miniatures (which are sold online).

Yet when you dive into the books, that’s where some of the cracks in the armor begin to show. The rulebook isn’t very good as a rules reference, with important bits of information all over the place. It just doesn’t have a logical flow from one section to another that an experienced rulebook writer will provide. And then there is the dungeon scenario guide the was accidentally printed in reverse order. I had to pull the staples apart and flip the pages to get it seated correctly.

But moving on to the actual gameplay, this was also hit or miss for me. The combat is where you’ll be spending most of your time, and it does some interesting things. Using monster abilities, having to deal with multiple heroes (who get bonuses) was all pretty interesting. However, the scaling of encounters feels wildly inconsistent. Since the heroes attack with the minimum die they need (IE: if their stat is an 8 magic, there roll a d8, if their stat is 13 magic, they roll a d20), the chance of them hitting you is going to change after each hero dies, but not in a linear progression. And since heroes always hit on a max value roll, a single hero rolling a d4 has a 25% chance to hit you, while two heroes rolling a d8 only have a 12.5% chance to hit you. I’ll spare you the math calculations on the rest of the dice, but if you have a high stat value, the scaling just feels completely arbitrary.

The other issue I had was that the scenarios are kind of at odds with the gameplay. For example, the second scenario requires you to kill 30 heroes before you run out of time (about 20 turns). This means, if you run into either multiple wizards in a battle (who eat time every round from you) or trap tiles (which are tiles with no heroes on them), you might lose the game just due to how the random dungeon was setup. In another scenario, you have to collect 6 minion dice, but there are 12 on the board. I never even bothered going to the second half of the dungeon, making me wonder why I even bothered to set it up in the first place. The scenarios seem to encourage a linear path rather than exploration.

Despite all of that though, Die in the Dungeon does have some pluses in its corner. There are 5 different monsters to control and they all feel somewhat unique. They each have two special powers and 4 one time use cards (even if some are pretty situational). And the experience dice and minions help to get around the randomness of the die rolls, so those were great ideas. There are also epic heroes to tackle and allies you’ll sometimes come across that also help spice up the variety of the game. Overall its core gameplay loops isn’t bad, but is just held back by some of the scenario design and, at times, somewhat fiddly gameplay.

Die in the Dungeon is a good game that probably could have used more time in the oven. I think with a bit more development time, some of the aforementioned wrinkles could have been ironed out. But as it stands, it’s fun for a short diversion of dice chucking every now and then, but probably not one I’d return to too often. Designer Wesley Woodbury definitely had some good ideas here, and with some more refinement, Die in the Dungeon would be a hidden gem.

Final Score: 3 Stars – Some good ideas for a solo dungeon crawler, but is held back by some odd combat mechanics.

Hits:
• Some great looking components
• Good ways to get around dice randomness
• Diverse lineup of monsters to control

Misses:
• Combat scaling doesn’t make much sense
• Some scenarios feel at odds with the gameplay
• Rulebook and scenario book are a bit of a mess.