We review Die Hard: The Nakatomi Heist, a 1 vs many board game published by The Op. One player is John McClane who is trying to thwart 1-3 players who play Hans Gruber and his gang of thieves from killing hostages and breaking into the Nakatomi vault. 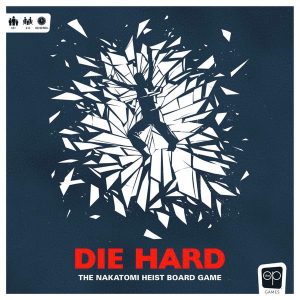 There are usually two camps of thought to the following question: Is Die Hard a holiday movie? While the answer is obviously yes, they’re many who surprisingly don’t believe this to be true. This can spark a rather spirited debate in and around the holiday season. I try hard to avoid the debate this time of year and will instead curl up on the sofa and watch one of my favorite holiday movies, Die Hard.

This brings us to today’s review, Die Hard: The Nakatomi Heist from The Op. The popular 1988 film comes to life in board game form as John McClane tries to thwart Hans Gruber and his gang of thieves.

Die Hard is a 1 versus many, hand management game that is for 2-4 players and plays between 60-90 minutes. It plays best with 3-4 players.

One player will take the role of John McClane and everyone else will be Hans Gruber and his gang of thieves. The game and game board are divided up into 3 separate acts that mirror the ’88 film.

To start, the McClane player will draw 5 cards. His action cards will allow him to move, sneak, punch, shoot, support, shove, and recover. Each act has its own objective cards and tokens that will be placed on the board that McClane will want to collect. He must collect all objectives before moving to the exit space and move on to the next act. If McClane runs out of action cards before collecting his objectives and moving to the exit space, he dies, the thieves win, and the game ends.

The thief player(s) will each draw cards from their action decks and that amount will depend on the number of players. In each act, the thieves will be playing 3 cards to do two things. The first is to stop McClane by collecting the thief’s objectives for the act that will hinder McClane and even end the act early. The second to break the lock on the Nakatomi vault. The thieves will play 3 cards and 2 of those cards will be used to break the lock noted by number(s) in the top left corner of the cards, and 1 card will list the thief’s actions on the game board for that turn.

The thief’s actions are noted on the bottom of the card and allow them to lock, move, punch, shoot, and reinforce. The lock cards are setup as a gird and when the thieves have covered all the numbers on a given lock card, then they have broken that lock. There are 6 total locks to be broken.

End game: McClane wins if he kills Hans Gruber in act 3. The thieves win if the 6th lock is broken & they trigger the roof explosion or if McClane is killed in Acts 1-3.

I have said it before and I will say it again, a game’s theme does not make or break the game for me. Now, that said Die Hard: The Nakatomi Heist is highly thematic, and it makes you feel like you are playing the ’88 film in board game form. The game and board are split into 3 scenes and the objectives for McClane and the thieves are pulling straight from the film. It was impressive how The Op immersed players into what McClane and the Thief’s experienced and captured the feel of the original 1988 film.

The game mechanics are straightforward and are easy to pick up and learn. The hardest thing for most players to remember is that movement and combat (punch and shooting) are orthogonal only. It can be a little frustrating when your opponent is on an adjacent diagonal space but per the rules, they are not a valid target. Aside from keeping that straight (pun intended) the game mechanics are solid and support the theme. For example, the thief’s objectives will hinder and can even end acts 1-3 prematurely, but they will not kill McClane which again, mirrors the ’88 film.

There’s one thing worth noting that surprised me. I enjoyed playing the thieves at 3 player count. One thief plays the lead Thief for the round and shows his card to the other Thieves. The others then add their cards and then the Lead thief decides which two will be used for the Lock and which will be the action card. This is all done silently and only after the cards are revealed can the Thieves chat. This can add a nice amount of tension and can create some infighting which again adds to the theme.

The biggest downside for Die Hard: The Nakatomi Heist being so thematic is that each play will feel very close to the last one. Yes, you should mix up who are the thieves and John McClane but eventually, it will begin to feel repetitive, like re-watching a movie. There will be some subtle differences but for the most part, it will be the same experience. If you don’t mind this, then no worries for you. But for those looking for a game that gives you replay value you’re not going to find it here.

Another detail of Die Hard: The Nakatomi Heist that can be viewed as a negative is luck of the draw with Action cards, Objective tiles, and combat dice rolls. This is true of playing both McClane and the Thieves but more so for the McClane player since their margin of error feels less, since each Act is essentially a race to not run out of cards. The Act objectives are randomly placed and so when you find one that is not vital or is a hazard, it can be frustrating, and it wastes time.

The last detail that was a negative for me was the art design. It is not bad, but I just was not a fan of a noir detective backdrop style that is used throughout this game. The Op obviously has the IP for this game so why not use some of the imagery from the movie or at least create art that is a closer representation. I’m not sure why use an art style that takes away from the look when everything else pays homages and closely supports that ’88 film feel.

I will be blunt; I was shocked just how close Die Hard: The Nakatomi Heist follows the original film. This game mirrors it so closely that you feel like you’re in the movie. The game also has easy to learn rules and uses mechanics that keep it moving. The limited communication of the thieves gives a nice sense of tension and could create some infighting that thematically mirrors the film yet again.

Now what really holds back Die Hard: The Nakatomi Heist from scoring higher is that being so close to the movie cuts down the replay value. There will be some subtle things you might find in additional play-throughs but Die Hard is mostly going to seem like same game each time. Also, luck can be a significant factor in the game with minimal ways around it. Lastly, the noir art design doesn’t seem to fit the film thematically and it gives the impression that The Op didn’t have the IP for the ’88 film.

Final Score: 3 Stars – A highly thematic 1 v many game that is easy to learn but, like re-watching a movie, can become repetitive.

Hits:
• Highly thematic—captures the essence of ’88 film
• Easy to learn mechanics
• Limited communication amongst the thieves

Misses:
• Gameplay will become repetitive
• Luck can be a factor
• Art design