We review Dice Stars, the dice rolling filler game from Bruno Cathala and Ludovic Maublanc. Published by WizKids Games, in Dice Stars, players are rolling dice to try and earn the most points possible. 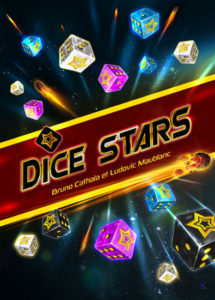 Designers Bruno Cathala and Ludovic Maublanc have teamed up over the years to bring us quite a diverse offering of games. From the combat area control game Cyclades to simpler fair, like the Lovecraftian game Pocket Madness, my ears always perk up when I see these two pairing up with a new offering.

Today we are going to be taking a look at Dice Stars, their newest dice game, published by WizKids Games. Dice Stars has players rolling different colored dice in the hopes of collecting enough points to win. Sounds easy enough, right? With a handful of unique mechanics, Dice Stars hopes it offers enough for it to stand out in the sea of dice rolling games.

Dice Stars is a dice rolling, set collection game for 2-4 players that takes about 20 minutes to play. Dice Star plays best with 2 players.

In Dice Stars, players are trying to earn the most points by the end of the game. Each turn, players will be pulling up to three dice from the bag, rolling them and adding the results to a communal dice pool. After rolling, a player will then be required to collect either numbers, colors or stars from the pool and adjust their score accordingly.

The components in Dice Stars are solid, except for a few minor issues. Included are the game are 14 custom dice in 4 different colors. The distribution of these dice are uneven, having 5 yellow, 4, blue, 3 purple and 2 black dice. Each die has either a numbered value, or a star symbol.

The only other component of note is the large pad of score sheets. There should be ample here to get you through many games.

The one component issue that annoys me is with the color of the yellow dice. They are definitely not yellow, but orange. While not a huge issue, it doesn’t match the color on the score sheet at all.

Playing Dice Stars is simple. Starting with the first player, up to 3 dice from the bag are drawn and rolled. The results are then added to the dice pool.

Then, the active player must choose one of three options:

The dice chosen are then placed in the discard pile. Discarded dice are added back to the bag when either the dice bag is empty, or someone takes stars on their turn.

Each player’s sheet also has a green overflow section for the number rows.

The game ends when either one player has filled out all white boxes on their score sheet, or can’t legally take any dice after rolling. This could happen, for example, if there are only 6s left in the dice pool and all the spaces in their 6s row are filled.

Dice Stars helps to prove that you don’t always need flashy components or a great theme to make a fun game. Designers Cathala and Maublanc really put their creativity to use when creating this little game.

I like how Dice Stars combines elements of set collection, dice rolling, and even some push-your-luck, all in one neat little package. While the rules are fairly simple, they do take a turn or two to wrap your head around. This is mostly due to the system of crossing off boxes before entering your score.

What I like about that system though, is how different colors score vs numbers. If you take a group of numbers, there is really no benefit to taking three “4s” all at once, vs taking one “4” over three turns. Ether way your sum and amount of boxes used will add up to the same.

However if you take colors, everything changes. If you take four “6s” at once, you are essentially adding “0s” to the first three lines, and a big score to the fourth. Yet if you take them one at a time, you are spreading that score out among 4 different, scoring rows.

If this kind of math makes your head hurt, never fear, Dice Stars can really be played as simple or complex as you like. Roll the dice and take what you think is best. Or you can ponder and debate with yourself how you think you can gain the optimum points. I really enjoyed that Dice Stars had this much strategy in its small package.

However, even with this level of decision making, Dice Stars can still be prone to swings of luck. In one game, a player rolled 3 stars, instantly letting them fill a full star row. Then on their very next turn, they rolled 3 more stars, adding them to the one already in the pool, and filled out a 4 star row. Needless to say, they won pretty big.

Another interesting thing with Dice Stars is that players can really choose when the game ends. I’ve only once seen a game end by a player not being able to choose any dice. Every other game has ended with a player filling up their white grid. I’ve even rushed the end game by trying to fill up my grid quickly, hoping to catch my opponent with partially completed star rows. Sometimes it’s OK to take sub-optimal dice if you think you are ahead enough and want to end the game.

When it comes to player scaling, I think Dice Stars is definitely at its best with 2 players. It’s OK with 3, but at 4, the down time gets to be a bit much. Since there isn’t really anything to do when it’s not your turn, it can be easy for players to become distracted while waiting to go again. And with 3-4, the board state can change so much between turns, you can’t even plan ahead.

However with 2, in addition to having a shortened time between turns, you can also more strategically work the dice pool. You can leave dice in there that you know your opponent doesn’t want in the hopes of taking them on your next turn. I should also note that there is a solo mode in Dice Stars that’s actually pretty fun, if you are into solo play.

Dice Stars ended up being a solid little filler game that I’m happy to have on my shelf. While I wish the box was a tad smaller to aid in portability, the game play itself is solid. I’ve long since kicked Yahtzee out of my game library, but If I did still have a copy of that game, Dice Stars would easily murder it. This makes it a great gateway game to play for those who are still enjoying that mass market title.

While not perfect, Dice Stars does offer a great balance of strategy and luck, to make for a quick playing filler game. This one can really be as thinky or casual as you are in the mood for. Dice Stars ended up being another solid offering from Bruno Cathala and Ludovic Maublanc.

Final Score: 3.5 Stars – An enjoyable dice rolling filler game. While the downtime can get a bit long at the higher player counts, Dice Stars is great at 1-2 players.

Hits:
• Unique mechanics
• Easy to learn, quick to play
• Can be as casual or strategic as you make it