We review Cytosis, a science-themed worker placement game published by Genius Games. Cytosis seeks to be a scientifically accurate tabletop board game that's not only fun, but teaches the players about biology. 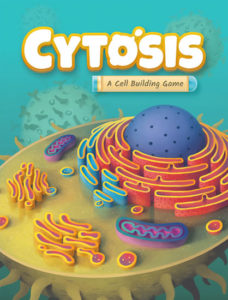 Ask anyone my age about cellular biology, and the response you will typically get is that “the mitochondria is the powerhouse of the cell.” It is the one fact, thanks to overzealous biology teachers and recent memes, that has lodged itself in the memory of the population. In reality, cells are a marvel of pathways that exist in harmony, where every structure and process works towards the greater goal of cell survival.

Cytosis: A Cell Biology Board Game puts you inside a cell, managing the inner workings to make the most healthy and well-functioning cell you can. Does Cytosis transcribe and translate cellular biology into a tabletop game effectively, or is there a mutation that messes up the process? Read ahead to find out.

Cytosis is a worker placement game for 2-5 players that plays in about 60-90 minutes. Cytosis plays best with 3 or 4 players.

Cytosis is a worker placement game, with the board being a cell and the action spaces taking the form of various cell structures. On a turn, each player places a flask token on a cell structure, then takes the action associated with that cell structure, which parallels the function of the structure in the actual cell (i.e. the mitochondria action gives you ATP, the nucleus gives mRNA, etc.).

Action spaces allow you to acquire and convert resources, gain an extra action per turn, gain energy, engage in protein synthesis (see below) and pick new cell component cards. In the game, resources you are working with are the macromolecules that are used in cells (lipids, proteins, mRNA, and carbohydrates) and the energy needed to perform those processes (ATP).

The primary means of scoring points is for players to complete Cell Component Cards. Enzyme synthesis cards can be completed in one step, trading in proteins, carbs, and energy to complete the card and score points, with bonus points scored if different types of enzymes are produced.

Steroid, protein hormones and receptors have a three-step process that progresses over multiple turns (as each step has its own action), starting at the endoplasmic reticulum, moving to the Golgi body, and ending with exocytosis. Each card has a certain number of macromolecules and energy needed to satisfy its completion requirements, and only after all three steps are completed does the card score points.

After all players have placed their flasks and taken their actions, an event card triggers that effects the next round by increasing the number of a particular resource produced, reducing costs for cell component cards, or forcing players to discard stocked resources. The event cards also act as a timer, with the game ending when the event cards run out.

End-game scoring involves bonus points for enzyme set collection and from goal cards that players can choose to achieve during gameplay, providing bonus points for a particular type of cell component card completed. The player with the most points at the end of the game is the winner.

The greatest aspect of Cytosis is its dedication to the theme of protein synthesis and cell functioning, which shines through in all facets of gameplay. All the major cell structures align their function in a cell with game mechanics, providing an immersive experience of creating and transporting various chemicals in and out of the cells. The attention to detail when it comes to the science behind the game is refreshing, as there is nothing more frustrating than seeing alternate conceptions of science reinforced in any form of popular culture.

Unfortunately, while a theme of cytosis may be attractive to some players based on their interests, it is a theme that has the risks putting others off completely. In our group, we found that the theme was hit-or-miss, with no real grey area for ambivalence. While some of our players really were invested and immersed in the theme, others saw it nothing more than an exercise in pushing cubes.

The only mechanic that sets Cytosis apart from similar games that require resource collection to score points is the three-step process of cellular transport. The multi-step, multi-turn process to engage in protein synthesis adds a layer of strategy to the game that adds to both the strategic depth and the immersiveness of the theme. In addition, players can choose to forgo the long scoring process in favor of shorter-duration scoring goals, but with the risk that those goals score fewer points. Having multiple pathways to score points gives players flexibility when trying to develop an optimal strategy for winning.

The major issue that we encountered was that of repetitive gameplay. While the game does offer a variety of means of scoring points, a strategy is predicated on the available scoring cards and how they relate to the bonus cards. We found that the main means to victory was to focus on the bonus cards and the large number of points they provide at the end of the game, which led to players trying to focus on the same strategies and pathways for winning. This tended to lead to repetitive turns that, especially in the 2-player games we engaged in, were somewhat of a let-down. This was also compounded by the fact that your scoring strategy is dependent on an ever-changing and limited set of choices, preventing a long-term strategy for scoring to be enacted.

The turn-based events, while ostensibly meant to provide a twist to gameplay each round, provided an unneeded randomizer that had a major impact and swung the game in the direction of a particular player, depending on their circumstances and board state. When everything was set for a player to say, collect an extra ATP in a round, it had major effects for the actions they could take that turn. We would have preferred to have seen the design of the game avoid this element of random effects, in order to promote more careful strategic choices and less variability in the form of bonuses.

Cytosis delivers exactly what it promises – a worker placement game with a unique theme. Gameplay mechanics are innovative in some ways, while repetitive in others. Cytosis provides a fun game for those with an interest in science, for families with students who are learning about cell biology, or any gamer group that is looking for a theme outside of farming or dungeon crawling or space exploring.

Misses:
• Repetitive gameplay
• Theme can be a hit-or-miss