We review Crusaders: Thy Will Be Done, a Mancala style board game published by Tasty Minstrel Games. Crusaders is an easy to learn game that makes a great next step game. 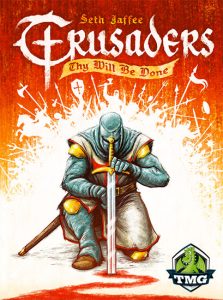 I think most people are probably at least somewhat familiar with the time period known as The Crusades. A time where the Pope tasked militaristic orders of knights in spreading Christianity across Europe. I’ll save the debates on the effectiveness of said campaign for the scholars and just note that The Crusades are the theme of today’s review of Crusaders: Thy Will Be Done (Crusaders). Each player will take on the role of a different knightly order trying to collect the most influence during the game.

Crusaders: Thy Will Be Done is a Mancala style game for 2-4 players that takes about 45-60 minutes to play. Crusaders plays best with 3-4 players.

The gameplay in Crusaders is fairly straight forward. On a player’s turn they have two options, either resolve an action or upgrade a tile. Players have 6 action wedges (forming a circle) that will have a different amount of action tokens on them. To take an action, choose one of your wedges and collect all the tokens from it. This will be the strength of the action. Then, after you’ve finished your action, you distribute the tokens on the remaining wedges in a clockwise manner.

If you don’t want to take an action you can upgrade a wedge by flipping it over. This has the benefit of giving you two different action options when you activate that wedge.

The game ends when all the influence tokens have been taken from the pool. The player with the most is the winner.

Even with my first learning game, I had no trouble picking up the gameplay for Crusaders. All of the games actions are fairly intuitive (with muster probably being the most abstract), which helps players to be able to get going rather quickly. In fact, I think Crusaders makes a great “Next Step” type of game. Something for players to try when they are ready to move on from their favorite gateway game.

This is aided by the fact that the central mechanic of Crusaders is pulled from the century old game, Manacala. Personally, I’m a big fan of that mechanic and would love to see it in more games (Five Tribes being one of my favorites that uses it). However, one of the downsides of the Mancala mechanic is that it can foster some analysis paralysis in players as it can lead to too many options on a turn. Thankfully I haven’t seen that as an issue in Crusaders.

For the most part, players will only have a couple of wedges that have enough tokens on them to be of any use. While you could take that influence action with only 2 action tokens, it’s usually not worth it since Crusaders is essentially a race game– action optimization is everything. This means that on your turn, you not only want to take the best possible action, but also need to try and set yourself up for future turns. If you know you are going to be moving, fighting, and then building, you want to make sure you have enough tokens to accomplishing your task on future turns

This is because you don’t want players to swoop in and steal a territory that you just cleared out. One of the knocks against Crusaders is that the player interaction is fairly minimal. The main way to mess with other players is to build in a territory that they just battled in. Other than that, you are mainly looking at a multiplayer solitaire type of game.

Finally, I do think that Crusaders has some solid replay value. The game comes with 10 different knightly order, each of which has their own unique ability. Some of those abilities are even strong enough to shape the way you approach the game. For example, The Order of Montesa receives a 3rd knight to move around the board or the The Knights of Calatrava only receive half the amount of action tokens, but each of their actions are stronger. Combine this with the fact that you can randomize the order of your actions wedges and it should help breathe a little extra bit of life into the game.

I was pleasantly surprised with Crusaders: Thy Will Be Done. I hadn’t really heard much about it before I played it and found it to have some addicting and engaging game play. I liked that you can and focus on different paths victory during the game, perhaps you want to crusade as much as possible or instead, maybe try to build as many structures (the last building in each row provides end game VPs). While the player interaction in Crusaders was fairly minimal, the gameplay had just the right length to make sure it didn’t overstay its welcome.

For those concerned about the theme of the game, Crusaders: Thy Will Be Done is defiantly not trying to be a history lesson (unlike say, Freedom the Underground Railroad), and the theme integration is fairly light. But if you are looking for an engaging eurogame with some solid mechanics and a race for victory points, this one should be on your radar.

Final Score: 4 Stars – A fun Mancala style game that makes for a great “Next Step” type of game.

Hits:
• Intuitive mechanics make it easy to get to the table.
• Multiple paths to victory
• Solid replay value