We review Cosmic Frog, a game of collection, combat, and theft on a planetary scale published by Devious Weasel Games. In Cosmic Frog you will be battling your opponents for the most points throughout the game. 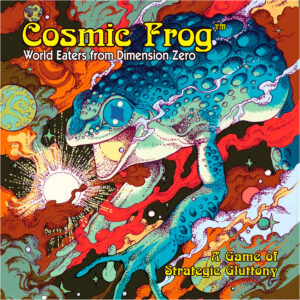 You are a two-mile tall invulnerable reyna (frog) sent by the First Ones (gods) to harvest terrain from the Shards to rebuild Aeth. Those are some of the terms used throughout a game of Cosmic Frog. I’ll refrain from using too many of those terms for my review, but you should know that’s what you’re getting into with the theme. You are now entering a dark and trippy dimension filled with gargantuan leaps and behemoth frog fights. Nothing you collect is necessarily yours to keep and one to five other frogs are trying to have a more valuable collection of lands than you. Watch your slimy back.

Cosmic Frog is a set collection and combat game for two to six players. Games last one to two hours on average.

The gameplay in Cosmic Frog takes place over a number of rounds, randomly determined based on specific tiles that get destroyed throughout the game. After setting up the shard (placing tiles on the map), play begins by turning over the top action card of the deck. This deck determines whose turn it is. Every player will have the same number of turns each round, but the order in which those turns take place will be random. That same deck also contains two special cards that affect the game pretty significantly. Those are the Aether Flux and the Splinter Strike cards. More on those later.

On a player’s turn, they must take an action and can also pay Oomph to take an extra action. Actions include attacking, leaping/landing (movement), harvesting tiles, disgorging tiles, raiding your opponent’s vault, and recovering your Oomph. Which actions are available depends on where your frog is located on the map. Frogs can be on the shard, in the aether, or in the outer dimensions.

While on the shard, players can leap, attack, harvest land tiles to put on one of their player boards (their gullet), recover Oomph, and make a special move/attack called a slipstream. If in the aether, frogs can attack, disgorge harvested tiles onto another player board (their vault), recover Oomph, or raid an opponent’s vault if they are in the outer dimensions. In the outer dimension, all you can do is roll a die to attempt to return to Dimension Zero (shard + aether).

Harvesting and disgorging are both key to winning the game. The tiles that end up in a player’s vault determine their final score. Points are awarded for contiguous exposed tiles of the same terrain and land type as well as having a diverse assortment of land types in one’s vault. When players are successfully attacked, they may lose land tiles from their gullet. They will also be knocked back. This can move them to a different tile on the shard, move them into the aether, or move them from the aether into the outer dimensions. If a frog ends up in the outer dimensions, they can then be raided, which means they are vulnerable to having land tiles taken from their precious vault. The game ends when the shard is broken or there are no terrain tiles left on the board.

All of this is made a bit crazier by some key cards. First, ability cards allow players to do some powerful actions or they add some passive ongoing ability. These ability cards also determine how well a player fares in combat as well as raiding. Each ability card will have a colored die assigned to shard combat, aether combat, and raiding. From white to yellow to red, each one gives you better odds of success than the last. When an aether flux card is drawn from the action deck, players can choose to pay to keep their ability, get a new random ability or choose from their current and a random option. Finally, the splinter strike card, drawn from the action deck, will remove tiles from a randomly determined area as outlined on the card. If a frog is on an affected tile, they can lose tiles in their gullet and be sent to the aether.

Cosmic Frog is a game of opportunism. Early turns are spent gathering land tiles that players plan to fill out their vault. The mood and flow of the game tends to take a sharp turn after the first attack happens. The flood gates open up as players realize that attacking another player that has the tiles they want may be a more fruitful and appealing option. So players jockey around the board, waiting for the right moment to strike. You’ll be on edge most of the time because the amount of movement relative to the size of the board means you are almost always in striking distance of another player. There’s no turtling here. You will get into some fights if you’re trying to win.

By more than name alone, you can see how this game drew some inspiration from Cosmic Encounter (CE). Turn order is resolved by a random deck (the way targets are determined in CE). Having an ally or two goes a long way in this game. Most relevant are the abilities which are crazy powerful and kept secret until you decide to reveal them. The game can devolve into pure chaos but in a good way.

Those ever-changing abilities really make Cosmic Frog sing. In most games like this, you get a cool ability, reveal it, then everyone knows what to look out for. Here, you will have an opportunity every round to change that ability. Your new ability will not be revealed until you decide to use it. There are times when you will intentionally keep that hidden until just the right moment. There are also abilities that trigger every turn, so you might reveal it right away to get the most out of it. Furthermore, each ability card has different strength values for combat and raids. At different points throughout the game, you may want to have the advantage on the shard or in the aether or while performing a raid. Some cards give you advantages in 2 or 3 or those areas and have a weaker ability to balance it out.

Let’s talk about the 2-mile-high cosmic elephant in the room. The luck factor. This game toes a fine line of being almost too luck-dependent for its weight and length. However, I think it falls just on the other side of that. There are some ways to mitigate luck a bit, including not spending too much time in the Aether and keeping ability cards with strong combat values. You also get two options for buffing your combat as long as you’ve saved up enough Oomph. However, this game does unapologetically punish bad rolls and reward good rolls. If you get hit really hard in the Aether, you’ll be sent to dimension zero. This feels almost like you’re losing a couple of turns. You get those actions back when you return, but it still feels like Monopoly jail. That doesn’t sit well with me. Not a dealbreaker, though.

The game itself is not difficult to teach and the player aides help it move along. Set up, however, can be a cosmic bear (last one, I swear). You need to lay out about 100 little tiles on the board. You are supposed to do this with the other players, but that doesn’t always work out when you’re trying to get multiple games in, so you set the game up before everyone gets there.

Components are top-notch. You get a neoprene mat for the board, well-sculpted frog miniatures, custom dice, chunky tiles, and Oomph crystals that look and feel solid. The art is gorgeous and trippy. Colors splattered throughout and whacky frogs on all of the cards. It’s the only game I have with this aesthetic, and I love it. If I had to complain, I wish there were 6 unique frog sculpts instead of 3, but that’s nitpicking at the highest level.

The fact that this game plays (even at its highest player count) so quickly, is a huge plus for me. This is a medium-weight game that can handle 6 players in a satisfying way. Turns are snappy, so downtime does not become noticeable. Not to mention, you may get several turns in a row if you’ve had to wait a while.

Cosmic Frog is a fast-paced, high-flying game with plenty of action. If you have a decent tolerance for luck and risk management, the influence of the dice should not deter you. If your thing is dry euro games that resemble spreadsheets, then you can comfortably skip this one. This game embraces chaos and is a lot of fun because of that.

For me, Cosmic Frog fills a nice hole in my collection as a medium-weight game that can handle up to six players with no problem. It’s also got some unique elements in its own right with the everchanging ability cards being at the forefront. There was a lot of care put into this package as far as components go, which is really just a bonus.

Hits:
• Wild and fun abilities that can be changed throughout the game
• Lots of combat with simple resolution
• Handles up to six players very well
• Very high-quality components.

Misses:
• Bad rolls can be punished pretty heavily.
• Set up is a bit tedious