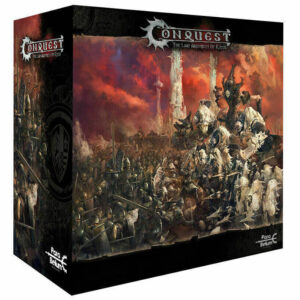 Conquest: The Last Argument of Kings is a 2-player miniatures war game that uses a rank and flank style of fighting and engagement. Each player takes control of a different army and engages in combat on the tabletop using their forces to score victory points. When playing with the core box, each game took about 45 minutes to 1 hour to complete depending on the scenario. For this review, I was able to use the core box containing units for The Hundred Kingdoms and The Spires armies.

Once each player has chosen their army and the scenario you can choose to add some terrain or fight on a plain battlefield. Unlike other war games, no models will start the game on the battlefield.

During the reinforcement phase, you use the reinforcement table to see if your units can march onto the field. The turn number determines how easy it is to bring different classes of units onto the field. During this phase, players roll dice to determine if units will arrive upon the battlefield depending on the roll. The farther along the game turns are, the easier it is to bring more powerful units onto the board.

In the command phase, each player will arrange their active unit cards in the order they wish to activate them on the battlefield. Order activation can play a huge role during the game and help determine the maneuvers and outcomes that each unit will be able to do.

The supremacy phase is when players roll off to see who will be activating first.

The action phase is where most of the game will occur. This is where players alternate activating the units in their command stack. Units will move, charge, rally, clash, and perform other actions during this phase.

The last phase is the victory phase where you check to see if either side has won. If not, you get to start the next turn.

For this review, I focused just on the units in the core box, and I found the systems to be pretty interesting. The box contains the models and their stat cards which helps you determine their statistics, abilities, and arrange activations during the command phase. Before I dive into the experience with the game mechanics, I just wanted to touch on the model quality. These models were a bit tougher to put together and lacked a bit of detail compared to some other miniature games I play. They were also a bit tougher to put together (partially due to the PDF instructions and the lack of examples for the variations). The newer models that were not included in this set do seem to be much better though.

My first thought about the game is that it sticks to the feeling of a rank and flank wargame. You have your models on circular bases in square stands that march rank and file onto the battlefield. Some actions allow you to rearrange them and such, but overall, that is how they will always be.

In my first game during the reinforcement phase, nobody made the dice roll and thus we moved right into turn two.This resulted in the game actually starting on turn two. In my second game, my opponent was able to march their light infantry onto the field 2 full turns before me and pushed deep into my territory. While that was great for my opponent, it felt terrible that I couldn’t get models onto the field for two whole turns. I just had to sit there and let my opponent complete their activations. I love the idea of the game capturing a snippet of a bigger battle and the units marching into the frame, but downtime is something a lot of wargames must combat and the chance rolls to not get to play with my models was only exacerbating that.

The command phase was an interesting time, especially because it came before the supremacy roll. I found that my opponent and I did a lot of back and forth about how winning supremacy and going first was going to either help or really hurt our activation orders. Overall, I enjoyed this interaction with the supremacy and command phase and felt that it helped contribute to the overall strategy in the game.

The action phase has a lot to dive into, so I will give some highlights. Moving with movement trays was great, and after playing so many miniatures games that don’t have “official” movement trays it was a nice change of pace. Being able to reform the formations wasn’t used as often but with larger armies I could easily see this as being a powerful ability, helping to reduce flank size.

Overall I felt that the combat was pretty streamlined. You would roll several dice equal to the attack characteristics for participating models, aiming for their clash value. Those successes would then be defended by the target. Compared to other games this was a fast and simple process. It does get a little trickier when heroes are involved but overall, my opponent and I really like the pacing for combat and shooting. A part of combat and maneuvering that felt realistic was trying to retreat from melee. In this sort of rank and flank style game, it was extremely difficult once engaged, especially on multiple fronts, to retreat and regroup. While realistic, it didn’t allow us to reconfigure our strategize and turned the center of the battlefield into an all-out brawl by turn 5.

When it comes to lore and theme, the flavor of the armies were great. The Spires army had a bit more specialized units in fewer numbers while the humans were more numerous but mostly run-of-the-mill stat and ability-wise. I felt that the core game gives a great balance for the first few introduction games.

The advanced rules for the game allow for even more customization of heroes and armies, adding spells, abilities, and masteries, letting you feel that you get to play the flavor of army you want.

Overall, the game system for Conquest: The Last Argument of Kings is solid. It sticks to a good representation of the feel of rank and flank miniatures games. However, I feel like there are some rules that need to be tweaked, especially an overhaul of the reinforcement phase. This really killed the fun for me when my rolls weren’t great. The miniatures in the core box seem to be of an older design as well, and the instructions and the minis need a bit of attention to be clearer on construction. Combat in Conquest: The Last Argument of Kings, while quick and streamlined, can get mired into an all-out melee in the center of the table.

If you are looking for an old school rank and flank game that is highly customizable this is for you.

Final Score: 3 stars – A good rank and flank that needs a bit of fine tuning.

Misses:
• Core Game models and instructions were confusing
• Reinforcement phase could kill the fun
• Reposition late game is hard to do