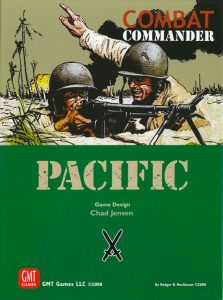 Hex-and-Counter World War II games are fairly common as one dives into the “hobby within a hobby” niche of wargaming. Soldiers from the Axis or Allies run about a map, spraying ammunition at the enemy on a (usually paper) map, abstracted down to cardboard squares and sometimes cards or dice.

Combat Commander is one that many consider a frontrunner in this subsect of games, designed by the late Chad Jensen. Combat Commander (both Europe and the focus of this review, Pacific) look at the genre in a different manner than most. Instead of the tame back-and-forth that some might expect, Jensen took the skeleton of those games and focused heavily on a key component missing from most others: the chaos of battle.

Covering all the intricacies of Combat Commander: Pacific would be impossible in a concise review, so instead, I am going to elaborate on some of the key gameplay mechanisms. There are three factions that can be used in a Combat Commander scenario: Imperial Japan, Pacific US, and the Pacific Commonwealth. Each faction has units with four to five numbers printed on a chit, which are morale (base defense strength), firepower (base attack strength), range (distance a unit can fire), and movement (movement points a unit can spend). Some special units have a number in a hex, which is a command hex, representing the distance they can command units or spot for mortars.

Much of the game uses the Fate Cards, which is a different deck for all three of the armies. Cards have an order printed at the top. These orders make up the general actions a player can take in a turn. In the middle are special actions that can be used when certain conditions are met, like when a friendly unit is hurt in battle, as an example. The lower middle has an event listed, but those only come into play when an event roll happens. The bottom of a card lists a random hex and a set of dice. There are no physical dice in CCP, so any time the game calls for a roll, the top card is flipped up and the dice are used. If there is a red border around the dice, something may trigger, such as an event or sniper fire. If an event happens, the next card from the deck is used.

Each game follows a similar pattern. A player plays cards up to the allotted number given in the scenario for their faction, making sure that a unit may only act once per turn. If they choose not to play cards, they may discard as many as their faction allows. Once their turn ends, they draw back up to their hand size and the opponent takes their turn. A game can end in a few ways.

When the Allied player must put a lost unit on the casualty track and it lands on the surrender chit (there is no surrender for the Imperial Japan army), they lose. If one side is completely eliminated, they are defeated. If the time marker advances onto or beyond the Sudden Death marker, a Sudden Death roll is made, and if the result is less than the number where the time marker sits, then the game ends. The time marker will be advancing when a player’s draw pile is empty and when a player rolls snake eyes (two one’s) in a die roll.

I want to start by saying that Combat Commander is not a game that seeks authenticity in its mechanics. In many ideas, it uses realistic rules, such as spotters for mortars, radios calling in aircraft runs, starshells lighting hexes during night scenarios, and leaders empowering the soldiers they command as examples. But Combat Commander thrives off of chaos. With each turn, your deck and the opponent’s can create situations that cannot happen in the majority of other wargames. A group of American soldiers cross a grassy field, only for the Japanese player to add barbed wire and stop your movement. The Commonwealth takes a shot at the enemy, only for sniper fire to shoot a hex so out in the open, it would appear they were hunting native wildlife as opposed to targeting the enemy. Fire spreads, weapons break, wounds are healed, heroes take charge, aircraft zoom in to make a dive-bomb, all which can happen with a flip of a card.

One of the best decisions in a game of Combat Commander: Pacific comes from the Initiative Card. When in the possession of a player, they have the option to use the Initiative Card to make a “reroll,” discarding the card they turned up and flipping up a new one. When this happens, the Initiative Card is handed to their opponent, where they can do the same thing on a future die roll. The catch is that at the end of a game, if there is still a tie in victory points, the player with the Initiative Card wins.

There are some wins and losses in the component department. The chits used by GMT are nice, with a wide range of art used to represent the soldiers. When determining the number of units allowed in the hex, you actually look at the number of individual people on the chits to determine if that number is more than seven. There is an action that can trigger when a unit is broken, and instead of breaking they are swapped with a team that is weaker, but has less people printed on the chit.

The chits are great, but unless you have multiple GMT counter trays or plan on investing in some, organization of the units is impossible (note for those interested, I used three trays for my copy). Honestly, it’s near unforgivable that trays are not included in the box. Combat Commander: Pacific does use paper maps, but not to cut corners on price. Instead, it is so that six double-sided maps can fit in the box, providing twelve different maps for both scenarios and the Combat Commander Random Scenario Generator. Some might be turned off by the basic terrain art, but it is functional and provides little confusion from a visual standpoint.

The biggest flaw I have with the game is the rules. While complexity can be expected in a wargame, the number of intricate rules that come up in a single game can be daunting, and I had played Combat Commander before this review. After my first play of Combat Commander: Pacific, I read back through the rules and there were quite a few I had misunderstood, and that is without mentioning the number I didn’t teach because they only come up from the luck of triggering an event, like planes. This is one of those games I am unsure I will ever play entirely correct.

That said, the rulebook isn’t laid out poorly. There are clear sections and an essential index showing where rules can be located. But 27 pages with three columns of text is a lot to digest, even for a seasoned gamer like myself. Retaining all the intricate rules of nights, fire for effect and, fortifications is hard enough when you don’t have to look through five pages if you have questions on an event or action.

There’s a lot of good in Combat Commander: Pacific. There really aren’t many wargames that offer a similar feel to it due to the amount of chaos. And thinking about it, that connects well with how a battlefield might look. A soldier may be confused or scared and fires poorly. Support may join at a whim. A weapon may jam. Fire may engulf part of the battlefield.

Combat Commander: Pacific has a lot to offer, particularly for those that are looking for a lifestyle game. I recognize that those that commit to playing this game 20+ times will have more enjoyment than I did in my review because many of those rules could become second nature with continual experience. I have to applaud Chad Jensen’s attention to detail. But for a gamer like myself, I have a hard time returning to games where a major rules refresher is required. Combat Commander: Pacific is one of those games.

Final Score: 3.5 Stars – A fun, chaotic, but rules-heavy look at World War II. A game that would grow in appreciation with rules-familiarity and regular plays.

Hits:
• Endless variety with scenarios, events, units, weapons, and maps
• Quick turns all revolving around cards
• Chaos through events is entertaining
• Fun to watch the battle play out
• Initiative card is a smart way to break ties and handle rerolls

Misses:
• Rules overhead is an undertaking when learning, teaching, or refreshing
• The number of essential rules can mean many early games are incorrectly played
• Chit organizers are required, but not included
• Turns feel a tad inconsequential when missing shots numerous turns in a row