We review cocobanana, a quick playing dexterity game published by Mandoo Games. In cocobanana, players are trying to get rid of all their cards by playing them and smacking other players in the head with a banana. 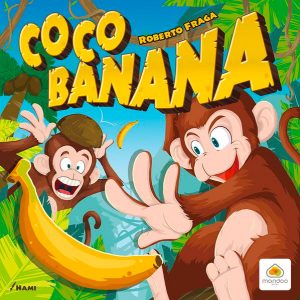 Giggling ensued when I saw the person on the cover in pure delight protecting themselves from a banana using a coconut as a helmet. The obvious absurdity that a game actually came with these two objects was reason enough to have to play it.

Cocobanana is a dexterity action game for 2 to 5 players that takes about 10 minutes to play. The best experience is with 4 players to sit around a table comfortably in fair reach of the objects needed to win the game.

This game prominently features a banana and a coconut that lay on the middle of the table. This is most definitely a dexterity game with an encumbrance because your personal deck must be held in one of your hands, while the other hand is free to pick up the objects. Whoever ate a banana most recently becomes starting player—so it’s guaranteed that I would never be the starting player in this game as bananas are not a favorite of mine.

To play, the starting player draws the top card of their deck and plays it on top of any other player’s card. Coconuts defend against Bananas, so you perform the action accordingly by first grabbing the item and then acting out the battle, but if both players have the same action item then it comes down to shouting “Oookiki!” and then grabbing the item not shown on both cards.

One of the hardest aspects of this game was just getting my typical eurogamer friends to sit and play it in the first place! When I described the game and then eventually pulled out the box they looked at me incredulously. For such a simple concept, being able to just understand quickly from the box how to play was extremely helpful in starting the conversation, so I will give the art directors that much. But not to worry: I can say right away that this game was a hit at the end of the night.

There was some level of hesitation at first, because we aren’t a really touchy-feely bunch so being aggressive about grabbing a toy banana to then hit your friend with was really awkward. Once it was clear we were halfway through the game, folks began to get into it and try to strategize on who we thought to stay away from and who we could gang up on together. Since the game gives you the option on who to “fight”, there’s no stopping you from just laying into someone at the table right away. This is one of the fun opportunities to start trash talking, which to me is one of the things I look forward to in games like this.

Pattern recognition becomes important because it tells you both players’ winning conditions and pushes your brain to, in turn, push your body to react quickly. Not all banana art and not all coconut art are the same on the cards, so there isn’t much of an opportunity—outside of playing this game a lot—to train your brain.

The first encounter with “Oookiki” nearly left me laughing with tears streaming down my face. That realization of “Oh wow, both our cards are the same, what do we—oh, that” crossing the table was just too funny. Turns out that under pressure, keeping both what the key sound was and the object to grab in mind isn’t easy. “Oookiki” turned into various other forms and sounds that I dare not repeat here.

While all of that sounds fine and dandy, we did need to keep in mind over time to be careful with each others’ skulls and well-being. When acting quickly, even a successful coconut defensive stance could not withstand the strength and power of the accidental fist clutching the toy banana. Even the banana itself is not stuffed in a soft way so with the right amount of force it would dish out some hurt. The coconut itself was flimsy and difficult to pick up with one hand, which even further increased the chances of a headache. We also found that those of us who couldn’t reach the middle of the table easily had the habit of standing up, which gave us an aerial advantage.

Despite all this fun, the end of the game was unfortunately anti-climactic. One of the players couldn’t win on their last card so we just tried to stall them as long as possible by not choosing them to battle. Eventually, they did win because the turn order doesn’t change but it became more about delaying and less about finishing the game properly. I could read the slight annoyance on this player’s face as well, which wasn’t fun to witness.

Many of the party games I own have some kind of vocabulary barrier, mind melding exercise, or team factor to them. I’m glad that Cocobanana became the party game available that doesn’t have any of that. With the exception of the occasional punch to the head by banana offensives, and the tendency to stand from one’s seat, the game can be executed quickly and gracefully to even those who are disinterested at first. Most importantly, it’s a chance to let your guard down and just start yelling profanities in monkey speak.

Final Score: 3.5 Stars – Unleash your inner animal by defeating your enemies with bananas and defending yourself with coconuts in this fast-paced game to recognize patterns!

Misses:
• Safety hazard for your skull
• Dexterity expectations are unrealistic
• Not a sit down game