Board Game Review by::
Brian Biewer 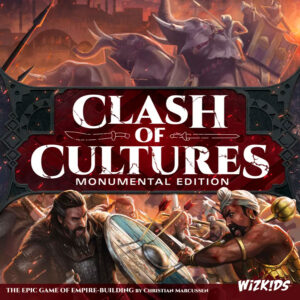 Tony: “Did you know that there is a revised edition of Clash of Cultures?”

Tony pointed to the table next to him. Bathed in angelic light was an in shrink copy of Clash of Cultures Monumental Edition.

And that is how I met my copy of Clash of Cultures Monumental Edition.

Clash of Cultures Monumental Edition is a civilization building for two to four players. Games can take between 2 hours to forever (5 hours), with higher player counts taking significantly longer unless all involved have had played the game multiple times.

The game lasts six Ages, with each Age consisting of three rounds and one status phase. During each round, players take three actions (actions can be repeated) from the following:

Once all three rounds are completed, a status phase is performed:

After six Ages are completed, final scores are tallied based on the number of cities and buildings owned by the player (be it in their own cities or in cities they influenced), advances and objectives completed, Wonders constructed, and scoring Events. The player with the most points is crowned “Best Clash of Cultures Player Until the Next Game”, a.k.a. the winner.

This is my favorite board game, period. I love civilization building games and this is the most fun and well-designed civilization game I have played.

The tech tree is designed perfectly for a board game. There are nine categories of advances (twelve if you include the three governmental categories), with four advances in each category. After learning the top advances in a category, you can learn any of the other three in the same category. The few prerequisites in the 1st edition, like needing Cartography for Navigation, have been removed.

This allows there to be simplified prerequisites without being overly complicated, perfect for the board game medium. Do you want to go military to defend your people and reduce the carbon footprint your opponents are leaving on our planet? Or do you want to go economic and build up quicker and generate more resources than your rivals? Choosing which advancements to pursue is one of the main decision points as well as one of the most fun aspects of the game.

15 civilizations, previously sold separately in an expansion, one of which, the Aztecs, was a promo, are included in the game. Not only does each civilization add four more unique advances, but each civilization includes three historical leaders that have two unique powers as well. These expansions were considered a “must have” for the 1st edition but were out of print and difficult to find. The inclusion of the expansion in the Monumental edition significantly increases the value of this package. I love the flavor, the options, and the replay value the civilizations provide. One note for 1st edition veterans, you now have to Recruit your leader. You do not start with one at the beginning of the game, a change I like because now you have to invest in your leader to get their two special powers.

What good is a civilization game without a great map to explore? Hint: it is not. The map system in Clash of Cultures is excellent. Each map tile includes four hexes that are a combination of plains (food), barrens (food with the right advance), mountains (ore), forests (wood), and seas (again, food with the right advance). Except for your starting tile, some of which are specific for certain civilizations, all tiles start facing down. As the game progresses, you will expand from your initial city and flip the tiles over as your settlers, boats and/or army units reach unexplored hexes. The map will be varied and unique each time you play.

Maximizing your productivity on the map spaces you explore is key to expanding your civilization. Food and ideas are used to learn new technologies (advances), while a combination of food, ore, and wood will be used to recruit units and build structures that give different bonuses, like Fortresses that protect from attackers or Marketplaces that let you recruit Cavalry or Elephants. Each city is limited to four buildings, so you will need to figure out which improvements will work best for your city given its location and surrounding hexes. Seeing your empire expand as the game progresses is very satisfying and one of the many reasons I love this game.

My only nitpick is that four player games take too long unless everyone is well versed in the game. I would love to play this with four, but for me, the best player count is three because of the fun to time invested ratio. I also love it as a two player game.

I couldn’t touch on everything in this game, such as attacking a player through influence (converting one of their city pieces to one of yours for end game scoring), event cards and their impact, action cards and their benefits, objective cards, and trying to complete either its development or military scoring opportunity, trading with other players and barbarians and pirates ruining your best laid plans. There is so much to this game and I pretty much enjoy all of it.

I have been writing reviews on Board Game Quest for about nine years. This is the first time I have rated a game a 5.0. Clash of Cultures is my favorite board game in my collection! If you even remotely like civilization games, just go out and buy it. If you are hesitant, try it first and THEN buy it if you like it; however, if there is any justice in the board gaming world, this game will be sold out by the time you decide to buy it due to your lack of faith.

If you are new to civilization games or prefer low to no conflict, I still recommend you at least try the game just once. It will open your eyes to a new genre of games that I find very satisfying to play. In addition, I generally dislike direct conflict in games, but because of how the game is designed, I do not mind it in Clash of Cultures. I usually play defensively but have enjoyed playing offensively as well.

Final Scores: 5 Stars – Best civilization game on the market. My favorite game in my collection.

Hits:
• Best civilization game ever made
• Tech tree is well balanced
• Includes the Civilizations expansion, adding 15 Civilizations to the game
• Map is unique every game
• Building up your civilization is satisfying
• Component upgrades are great
• Updated rules improve the game