We review Castle Party, a flip and write board game published by Devir Games. In Castle Party, players are drawing shapes in their castle to make groupings of monsters. 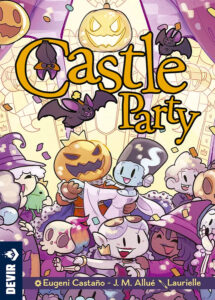 Want to hear something crazy? Since 2019, there have been almost 500 roll and write (or flip and write) games released. Probably close to 400 if you don’t count expansions. Even still, for only about 2-3 years, that’s an insane amount of games for this genre. Have we reached a saturation point for this genre? Probably. Are designers still innovating in it? Definitely. Do you need another * and write game? That’s for you to decide.

And that’s where Castle Party comes in. This new flip-and-write game is published by Devir Games and was designed by Josep M. Allué and Eugeni Castaño. Does this game break the mold an deserve a place on your shelf? Let’s find out.

Castle Party will have players filling their ballroom with a number of Halloween-themed monsters: vampires, ghosts, witches, and even the occasional unicorn. The ultimate goal? To score the most points of course.

Each round, the lead player will draw and play a pattern card that shows a polyomino shape. The players will then communally build that pattern using cards from their hand. Stating with the lead player, each player will, in turn, place a monster into the shape of the pattern. So if you have an L shape, it will eventually be made up of 4 square cards of a variety of monsters.

Once the shape is built, each player must draw that shape into their castle from the direction they see it on the table. Players will use shapes to mimic the monsters, so no need to dust of those artistic skills. Circles might be ghosts, triangles can be witches. Since each player is drawing the shape from the direction they view it, everyone’s castle should look different.

At certain points during the game, a scoring phase will happen. These are all different, so players must plan for them as they build their party. Each player also has access to three, one-time use powers that will let them alter the shape being drawn.

Once the last time card is drawn, players total up their points. Points are awarded for a few ways, but the main one is having large, contiguous groups of monsters.

What first attracted me to Castle Party was the theme. A lot of monsters coming together for a big party just sounded fun. The Monster Mash song kept running through my head as we played the game. And the whimsical art only added to that enjoyment… you might say it was a graveyard smash!

What will help set Castle Party apart from other polynomial roll and writes are how you build your shapes. Each player will add shapes to the pattern one at a time. Even though you only ever have 3 cards to choose from at a time, it does create some interesting decisions. The first player’s card is predetermined with its placement, but from there, you can place it anywhere in the pattern as long as it’s touching a card. This calls for some thinky moments unless you end up with a hand of all the same card (which does happen).

And having the special powers does give players a little semblance of control over the chaos. Being able to rotate the shape, move pieces around, or just swap out one of the cards can be crucial to fitting your shape in the best of spots. What’s interesting about those powers is that two out of the three of them affect all players. So you don’t only rotate it for yourself, but for everyone at the table!

Unfortunately, there were a few issues we found with Castle Party. The first is that the game has a few production issues. The boards are kind of small, making it hard to use the chunky dry erase markers. But the bigger issue is the lack of player aids. Players were constantly trying to remember how each of the special powers works, as well as each of the scoring stages. For a game aimed at the casual audience, this feels like a big miss.

Castle Party also comes with an alternate board on the reverse side that adds a little bit of complexity. But none of the people I played with liked this version better. It added slightly more rules overhead and the expense of some blocked spaces on the board. Just wasn’t worth it in our opinion.

At the end of the day, Castle Party is a fine game. I’d even say it’s a good one. But I also don’t think it does enough to set itself apart that you will be coming back to this one again and again. After half a dozen plays, you’ll probably have seen all this one has to offer. It’s also in a bit of a weird zone where at 30+ minutes, it’s a bit too long of a play time for filler, but also not deep enough for a light game.

Final Score: 3 Stars – A solid flip and write game that could use a bit more TLC with its production values.