We review Carthago: Merchants and Guilds, an action selection game published by Capstone Games. In Carthago, players are trying to use thier limited actions to run a shipping empire in the Phoenician city of Carthage. 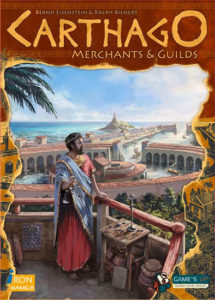 In Carthago: Merchants and Guilds players will attempt to become the most influential trader in the Phoenician city of Carthage. Players use multi-use cards to perform actions, trade goods, and spend money in the guilds to increase both their trading and prestige.

Carthago is an action selection game for 2-4 players. It scales for player count well and feels very similar with any number of players. Carthago typically lasts from 45-60 minutes.

Throughout the entire game of Carthago you will play three rounds of five actions each. Those actions are taken and paid for with multi-use cards. Each trade card shows one of the five actions, one of five possible goods, and some number of coins. The object of the game is generally to have as much presence in the guilds and acquire as many ships as possible, as the product of those two numbers will make up most of your scoring.

Players also start that game with three influence markers available and many more on their personal residence board. Goods can be spent to clear some of the influence markers from your board, increasing your scoring or strength in wartime while also giving you additional influence markers. These markers are incredibly important as they are placed temporarily in the docks to acquire ships or permanently in the guild house or on achievement tiles for end game scoring.

At the beginning of the game players have only their base cards (which show an action, but no goods or coins) and three random trade cards. The available actions include:

When you resolve the trading dock you simply pay the good card that corresponds to the ship’s type. You will receive trade cards showing coins up to the ship’s value and place the ship next to your board. For warship docks, you will randomly draw the top card of the ship deck and compare its strength to yours. If you meet or exceed its strength you will receive trade cards in the same fashion as the trading dock. Each ship you acquire also includes a special power that you can activate.

The action board in the middle of the table shows the last taken action for each player. When you take an action you must play a card showing that action and move your marker to the corresponding space on the action board. If other players also have their marker there you must discard an additional card (of any action) for each other player there. These cards will be returned to you at the conclusion of the round, but you must make sure you don’t run out of cards to take actions mid-round.

There are also two guild markers that rotate around the action board. If a guild marker is on the action you are taking you can additionally take a guild action after your main action. The guild action allows you to pay coins to place influence on either the guild house or one of the achievement tiles which give you special requirements for end game scoring. After three rounds, the player with the most points is the winner.

When set up on the table, Carthago has a pretty intimidating presence. There are a lot of different boards and cards that take up a good sized portion of your gaming table. But once you wrap your head around how it works and get through the explanation, it’s deceptively simple. The box advertises a 60-90 minute play time but experience players can finish in less than an hour in many cases.

That simplicity comes at a cost though. You only get to make 15 action choices throughout the entire game and in many cases the success of those choices will come down to some random elements. Resolving the warship dock is the most egregious example, as the strength of the ships range from 1 to 6, but players can only have 1, 3, or 5 strength. You can never be absolutely sure you can win a fight—unless you have ships whose special power is to increase your strength. Considering the number of ships you have at the end of the game is multiplied by your influence in the guild hall to make up the bulk of your victory points, it can make or break how your game goes.

Not only does winning a fight give you the ship, but you also get trade goods equal to the value of the ship. Losing puts you even further behind as you need those cards potentially as goods for the residence action or coins for the guild actions. At the very least, resolving the warship adds a bit of tension into the game. The actions are otherwise fairly mundane. There are few opportunities to create any efficiencies and making more out of your actions than other players — other than hoping you get a lot of cards (and hopefully ones with matching goods) from successful ship resolutions.

The trade dock mechanism is my favorite part of Carthago. When you claim a dock, you aren’t reserving a specific ship necessarily, as the ships could move if someone takes the harbor delivery action and moves a ship in front of yours, as all ships will move down the line. So there is almost a bit of a bluffing game especially at the higher player counts on when someone will claim a ship. Often you will place your influence disc in the dock ahead of the ship you actually want, expecting it to move down by the time you have a chance to claim it.

One final mention on the multi-use cards—while they certainly do have three separate functions you almost always care primarily about what type of good it is. Never in my plays did I care what the action was on the trade card I was taking with the market action. Sometimes the coins factored in to my decision, but normally only if the goods were the same or equivalent. This was exceptionally disappointing as multi-use cards are one of my favorite components in games but they don’t quite have the same feeling in Carthago.

Games with a small number of decisions are often described as a knife fight in a phone booth. The idea, obviously, is there isn’t a lot of time or even room to be all that fancy, but the implications of each and every choice can be devastating. Carthago feels a bit more like a game of tag in a phone booth. The decisions don’t pack quite enough of a punch for me to want to break this one out very often.

If you want to try it out the price point is reasonable and it plays similar at all player counts. If you are looking for a mid-weight euro you could certainly do worse than Carthago. But, you can probably find something with a more interesting theme or more meaningful decisions.

Final Score: 2.5 Stars – Feels a bit middle of the road in every sense. Nothing really stands out and grabs you.

Misses:
• Plenty of randomness that swing your success wildly.
• Multi-use cards are rarely used for actions, negating one of their uses.
• Cathago’s actions aren’t particularly interesting and the decisions are fairly straightforward.