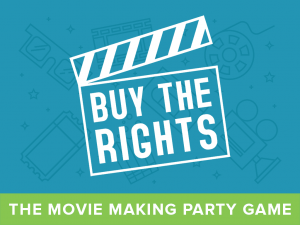 Going to the movies with my father, an audio/broadcast engineer for a major television news outlet for almost 40+ years, is always an adventure. Post-movie discussion tends to avoid talk of the plot or the acting, in favor of the not-as-popular Oscar award categories like sound editing, sound design, and cinematography.

Needless to say, he’s a bit of an oddity amongst moviegoers, who tend to want to review plot and actors and storyline. If you’re not like my dad, you may be interested in Buy The Rights, the initial launch from Literally Wizards Games. Does Buy the Rights make a big splash at the box office, or is it a dud that you can hold out for when it airs on cable on a Friday night? Read on to find out.

In Buy the Rights, you and your friends take on the roles of movie producers and screenwriters, putting together random elements into an elevator pitch for a movie. The Producer decides which pitches most creatively combine a genre, a hero, a hero descriptor, and a plot to make the best/funniest/weirdest/silliest movie, and awards those players points in the form of money. The player with the most money at the end of the game is declared the winner!

Each player gets dealt cards from four different decks, each representing an element of the film. The Genre deck contains cards describing the type of movie, while the Plot cards give a little more detail to what is happening in the story. The Hero cards provide a wide variety of protagonists to star in the picture, while the Hero descriptors give players the opportunity to add more detail (and usually a twist) to their leading star.

In each round, one player is the Producer, who acts as the judge, while the rest of the players act as Screenwriters, making an elevator pitch for their movie. A movie is developed by selecting one each of the Genre, Plot, Hero and Hero Descriptor cards to create the basis for a pitch.  One at a time, each of the Screenwriters gets the chance to convince the Producer to award them money (which serves as points) based on how well they perform when trying to sell their movie. The Producer can decide to award all of the money to a single player, or divide the money however they see fit. After a set amount of time (left up to the players, but at least 2 rounds is recommended), whoever has the most money is declared the winner!

Like any good party game, Buy the Rights has very simple rules that allow people to get into the game with very little time needed to explain rules. Thanks to already-popular party card games that involve creating silly combinations and judging mechanics, Buy the Rights will be very familiar to both the gamer and non-gamer crowd. In our plays, it took about a minute to bring everyone up to speed on how the game works, and there was very little in the way of confusion with the rules. Seeing that the content of the cards are rated-PG (unlike that other popular card game), the ease of rules allows this game to be enjoyed by families as well.

Like any good party game, Buy the Rights requires creativity and a bit of theatrics as part of its gameplay mechanics. Putting together cards to make a movie is just the start of the fun, because players are encouraged to create things like titles, add extra supporting details, create character names, and everything else that goes along with a movie pitch. We had a few players act like they were narrating the trailer, complete with cheesy announcer voices. Especially with a lively group, this game will provide you with plenty of opportunities to stretch your creative muscles.

The rules state that this game can handle between 4-10 players, but we would recommend to anyone playing that if you are playing with more than 6, that you decide to have some players get into teams. This will eliminate some of the downtime that will invariably crop up as you increase the number of players. The other recommendation we have is that you play with a timer, giving each player a maximum amount of time to make their pitch (60 seconds will usually suffice). With especially creative performers, some of the pitches can go on and on (and on) and having a hard cap helps keep things from getting stale.

A few variants are suggested in the rules, such as anonymity, with the Producer deciding on movies without the benefit of a pitch, in a mechanic reminiscent of other party card games. While this variant may work with a not-as-social group, we found it to be not as fun. Another variant had the creation of movie titles to be mandatory, but since we were doing that anyway, we didn’t think it needed inclusion in the rules. The final variant is Dice Mode, which has different events happening each round based on a d6 roll. We liked the Showdown events the best, with a common Hero or Genre drawn from the deck, and all players having to use that card in combination with their own. In the future, we would suggest variant rules where a Showdown happens every round.

Buy the Rights is a solid first outing by Literally Wizards Games. While not breaking new ground with mechanics, this game provides a fun time with an extremely easy set of rules and a creative theme. The different cards that are used to create the movies provide plenty of laughs and lots of replay value, and the fact that they are safe for younger gamers makes this a title that can be enjoyed both by families and by partygoers.  We would recommend Buy the Rights to any group or family who enjoys party games, and is looking for a new title for a different spin and content focus than existing party card games.

If you’d like to become a backer, pledges start at $25 for the full game and stretch goals. Buy the Rights is scheduled to be in backers hands in March of 2016 and you have until Friday, December 11th to become a backer. Head over today and check it out.