We review Beyond the Sun, a resource management, area control, and tech tree game published by Rio Grande Games. In Beyond the Sun, players are trying to earn the most points over the course of the game by colonizing planets and researching techs. 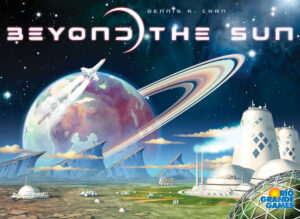 I must admit, I’m generally against the grain when it comes to the board gaming hype train. I don’t back many games on Kickstarter. Much of the BGG Top 50 I think shouldn’t be there. Even looking over my favorite games from last year, very few have reached the Top 1000 as of writing this. But sometimes, even I must admit that the masses get it right.

Spoilers up front, Beyond the Sun gets it right, but in ways that I didn’t expect when I picked it up, particularly from a first-time designer (Dennis Chan). It combines euro mechanics with area control and a pinch of civilization set in a near-future sci-fi universe. All the while, it does it in a quick playtime (one to two hours) with large amounts of variability.

The big hook that gets players interested in Beyond the Sun is that it heavily focuses on a tech tree. Players begin the game with four generic areas they may put their worker to reap benefits. Two of those spots are centered around research, which moves population (one of the three main resources) onto one of the available technologies. Before the technology is added, an event is triggered that can provide something for the active player or impact the entire table. Then they select a technology that can be placed where they researched. They can get an immediate bonus, unlock a new worker placement action, or sometimes both for the researching player(s). All the technology cards can fit into four types: scientific, economic, military, and commercial. The cards can have one or two different types on the card, and as the tech tree evolves, certain spots on the branching paths must be filled by matching arrows from the previous tiers.

What people aren’t talking about is the thing that more transparently aligns with the theme: the exploration board, which focuses around moving ships (the second resource) onto systems. If a player controls the most powerful fleet of ships on the system, they may build outposts on them for bonuses and improved production. If another player overtakes that fleet with a stronger one of their own, they then return the leaving outpost (a disc from their player board) and add one of their own. Once a certain strength is met and a specific action is taken, a system may be colonized for end game points and potentially a bonus for that player.

A turn in Beyond the Sun revolves around three phases: the action phase, production phase, and achievement phase. A player goes through the phases on their turn, and this repeats until a certain number of achievements have been claimed, which triggers the game’s end. During the action phase, players move their single worker to a new spot that they have researched or is available to all players. For production, a player chooses to produce population, ore (the final resource), or trade resources. The two choices for production are based on the discs they have removed in prior turns. One achievement may be claimed by a player to end their turn, which pushes the game to end with some end game scoring opportunities.

There are a lot of positives for Beyond the Sun. I’ll start with the apparent stuff on the surface before moving on to the key items that make this shine. While the rules may take a bit to teach, this is a game where you will be returning to the rules very few times. Actions are simple, and the iconography that accompanies it helps to dispel any questions. While getting through the rulebook can be a little lengthy (about 20 pages), everything is described using examples, pictures, and easy-to-understand writing.

Variability from play to play is really strong, and that’s without discussing strategies (which I’ll get to shortly). There are 20 events that will be seeded face down on the board. Granted, four of the twelve that are chosen are mandatory for the game so that communal worker placement spots are unlocked. But that still leaves 16 different events to encounter. More so than that, there are 46 different technologies that can be researched. Similar to the events, the Tier 1 techs are pre-selected and placed on the board, but even then, they are shuffled and placed in different parts of the tech tree each game, which does make a difference.

These technologies are vital to Beyond the Sun’s quality of design. Every action phase you are looking at the ones already available to you, thinking of both the one-time bonus you can pick up and the new actions that you may take. Further than that, you are looking at the types of cards (aka color) that best fit your strategy to research and help you further. And I want it to be known, if you can play this game and comprehend the rules, go ahead and add the technology tableau bars from the expert variant in for your first game. This small addition opens Beyond the Sun up to further plan for future turns and strategies.

Speaking of strategies, there are quite a few ways one can seek points. I’ve seen players research all Tier 1, 2, and 3 technologies and still barely sneak by a win against someone who fully colonized and explored systems. In one play, I was able to score 7 points just from automation, which can be nearly a third of a winning score. And game-by-game, the Tier 4 technologies (which all focus around scoring) and achievements will be different, and those award large sums of points.

One final positive I want to hit on is a certain aspect of the components and how they make game experience better: the resource cubes. Limiting the main spendable resources to items on the cubes and ore streamlines the game in a way that largely prevents mental overload. It was a smart design decision to put population and ships all on the same cube, because those two stimulate the diverging strategies. Not only do players have to choose the strategy, but also managing the receiving of cubes on the player board columns is its own mini puzzle that’s fun through creating stress.

Keeping on the components, the rest of the game looks fairly bland for being a space exploration game. The player boards are a solid white. The tech cards are that same shade of white and only feature writing and iconography. There isn’t much art to speak of, outside of the systems you’re exploring, and even then, they are standard moons, stars, and planets with minimal detail. There is a stark disconnect between the cover and the components.

The biggest flaw that comes to a head is usability. Not through rules or iconography, but size and orientation. Let’s paint the picture of a four-player game. Set out on the table, there would be the main board, four player boards, some decently sized player aids, the exploration board, some achievements, and the technology tableau if using it (which once again, I recommend). Table space is limited. And in games with more players, it’s inevitable that certain players will have trouble seeing the necessary information on the opposite side of the table. One player may be right next to the technology cards, but they will have difficulty reading the newest system added to the exploration board. To further all this, if the main board is set in a certain manner, one player will be forced to intake all the information upside down. It can be a thing in other games, it’s not usually a problem for most games with a large central play area.

That was a lengthy negative section, but to be honest, it’s hardly been an issue when keeping player count low and choice in tables. Knowing that going into the game, and you’ll have a great time. Beyond the Sun does a lot of what I want in a Eurogame. There are large amounts of strategic paths to explore. It’s got enough interaction to where you care what others do on their turns. Turns are quick to take, and the next player can honestly start their action phase during the other’s production. And on top of all that, Beyond the Sun produces a whole lot of “oh that’s a cool card” moments as the events flip and new technologies are researched.

Leave a Reply to J. A. Cancel reply