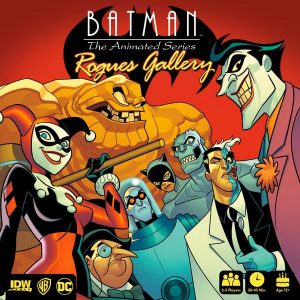 In many games, players take on the role of heroes trying to foil an evil villains plans. Perhaps that goes towards us humans natural inclination to want to do good? Regardless, I always enjoy the chance to hop on the other side of the moral code and play the bad guy.

Which brings us to today’s review of Batman: The Animated Series – Rogues Gallery from IDW Games. This press your luck game lets you jump into the shoes of your favorite Batman villain and attempt to do the impossible, take down Batman and claim Gotham City for yourself.

Each player starts the game with a unique villain, an upgrade card, and two accomplices. On a players turn they roll all 7 green dice (and any purple dice they’ve earned from upgrading their villain). Then it’s time to go on a crime spree. The top card of the hero deck is drawn and the player must spend dice to defeat it. Cards will require either an exact die result, dice totaling a value or higher (IE: 4+), or dice results not used on the card yet (or any combination of those). The player may use accomplices or upgrades to help defeat the hero.

To use an upgrade, the player must discard a number of accomplices to their discard pile. To use an accomplice for their ability, they activate the card and then give it to the player on their right.

If the hero is defeated, the bat signal track is increased the number of spaces equal to the strength of the hero defeated. At that point, a player can stop or press their luck and try and defeat another hero with their remaining dice. Should they advance the bat signal track to space 10, they can attempt to defeat Batman and win the game.

If a villain fails to defeat a hero, they are arrested and their turn ends. They go to jail, collect one lucky coin, 2 schemes, and an accomplice. They clearly did some networking in jail.

Once a player decides to stop fighting heroes, they can spend time upgrading their villain. The player gains schemes equal to the strength of all the heroes they defeated that can be spent on upgrades, accomplices, or upgrading their villain’s power to gain purple dice. Then play passes to the next player clockwise. The first player to take down Batman wins.

I must say, I was pleasantly surprised with the gameplay in Rogues Gallery. I’m always a little apprehensive with licensed games, but game designer Sen-Foong Lim and Jessey Wright delivered on engaging experience that doesn’t just use its theme as a way to sell copies to the fanbase. According to IDW Games, their goal was to create a press your luck style game where players don’t bank points. And on that front, they succeeded.

Rogues Gallery is all about dice management, yet players also have a plethora of ways to twist luck in their favor. From upgrades that grant rerolls, to straight-up changing die faces, to getting back used dice, I never felt like I was a slave to the dice rolls in Rogues Gallery. Both the upgrades and the accomplices have a nice variety that should help give players different paths towards victory.

I also liked how the Accomplice cards were multi-functional. While their powers are far from game-breaking, they are still useful in two different ways. You can discard them to activate your upgrades, or you can use their card power, but you have to give them to an opponent then. I’m not sure the thematic reason behind the second use (maybe the hired goons are a fickle bunch), but mechanic wise, it does create some interesting decisions to make. Strong cards you are going to want to keep for the opportune moment, not only because you won’t be able to use it again, but you are actually making your opponents stronger!

One thing I wasn’t too sold on were the different villain powers. I loathe to call something unbalanced without playtesting every card a ton of times, but some villain powers definitely feel better than others. For example, Mr. Freeze can defeat any hero after assigning only 1 die, while Catwoman simply starts with a low-cost upgrade card. I’d take Freeze any day of the week over the claw upgrade. But with 11 villain sheets, players can easily pick their favorites and ignore the ones they don’t like.

I was a big fan of the Batman: Animated Series and I think Rogues Gallery does justice to that great show. The gameplay is light, engaging, and quick to play. I think most of our games were about 4-5 rounds, tops. That’s because schemes are usually plentiful, so characters tend to power up rather quickly. It just takes that one, awesome turn to take down Batman and claim victory.

Batman: The Animated Series: Rogues Gallery was a surprising hit for me and I enjoyed the new direction it took the press your luck genre. The game is light enough to be played at the start or end of a game night when you are looking for something more casual to wind down with. So if you are a fan of the worlds greatest detective, check out Batman: Animated Series Rogues Gallery and see if you can take down the Bat.

Final Score: 4 Stars – A fun take on the press your luck genre that lets you jump right into the shoes of your favorite supervillain.

Hits:
• Easy to learn, quick rounds
• Lots of options to mitigate luck
• Interesting choices to make with accomplice cards
• Failing a round doesn’t put you out of the game