We review Balloon Pop!, a push your luck, roll and write dice game from publisher Tasty Minstrel Games. In Balloon Pop!, players are trying to earn the most points all while avoiding popping balloons. 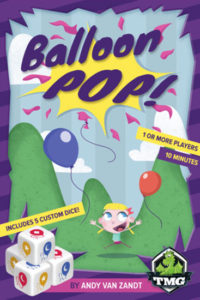 Today we’re going to look at Balloon Pop from Tasty Minstrel Games. Balloon Pop is a push your luck, roll and write game where you roll customized dice and try not to pop balloons to gain points.

In Balloon Pop, players start with 3 dice and can choose to reroll some or all, but if you do, you add a die to the next roll. Once a player re-rolls twice or is satisfied with their roll, they record the results on their scoring sheet by circling the numbers listed. The dice are then passed to the next player.

When scoring, it’s important to note that players will only score when a player circles the last red number under the balloon. This signifies a “Break.” If there is a Break during the round, all players continue to take their turn until reaching the starting player. All players then score points equal to the circled numbers in each column. If there are multiple breaks in a round, only one scoring takes place.

After three Breaks, players will total their scores from all 3 Breaks and the player with the highest points is the winner.

Out of the gates this was a very easy game to learn and teach. Players young and old should have no issues learning and mastering the game play. I think this could be both a gateway game for new players and a filler game for more experienced gamers looking for a 10 minute distraction.

It’s also important to note that this is one of those rare games that can scale up to 10 players. There aren’t many games that can give up to 10 players a balanced game experience but Balloon Pop does. Each player will have the same length of play and, aside from Break scoring at the end of the round, only player individual rolls will affect their scoring.

One big negative for Balloon Pop is the scoring sheet pad. It’s basically too thin and only holds 50 sheets. The box comes with an insert that is not needed and the pad could have been much thicker, giving more sheets to play. So, if you play at a 10 player game 5 times, the Scoring Sheet pad would be all used up.

Another negative are the poor production values in Balloon Pop. Being that there’s not much in the way of components, what you do get is not done very well. The score sheet pad colors do not match custom dice colors. The colors appear are more like off-shades of the intended colors. The dice also have color flaws that either cover symbols or show white space on the balloon symbols. Overall, the game looks cheap thanks to its poor production.

Fortunately Balloon Pop is almost pocket-size making it very portable. Unfortunately, the game play is not very deep and there’s not much in the way of strategy. You can control your fate somewhat by re-rolling the dice you want, but the results like any other dice game will be random. Balloon Pop is not a bad game but there are better, more engaging press your luck and roll and write games on the market.

Balloon Pop should appeal to new gamers looking for a quick distraction and most experienced gamers will give this one a try to treat this game as a filler. Overall, it’s an ok portable game that scales up to 10 players giving each player a balanced game experience from start to finish.

Unfortunately, it’s not a deep game so Balloon Pop might not hold new and old players’ attention when it’s not their turn. The thin score pad and poor production values could scare off players from wanting to invest in Balloon Pop.

If you are interested in getting a copy of Balloon Pop you can pick it up for about $12.

Final Score: 2.0 Stars – An ok push your luck, roll and write game. It’s an easy to learn filler/gateway game for any player who’s looking for a 10 minute distraction.