We review Astro Trash, a real time board game published by The Op. In this frantic game, players are trying to quickly remove all the trash from their planet by rolling dice and using the results to move pieces. 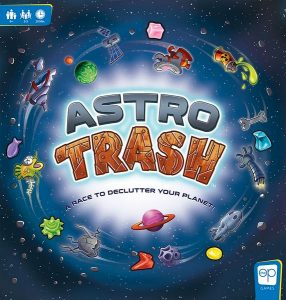 So today we are taking a look at a game about cleaning up the environment… kind of. Astro Trash isn’t quite that serious. But you will be responsible for clearing your planet of a variety of junk, debris, and the occasional fish. And you’ll be doing it in a race against other players as their trash might just be headed into your orbit.

Astro Trash is a real-time, dice rolling game for 3-5 players that takes about 10 minutes to play.

In Astro Trash, each player will start with a planet populated with… well… trash. That trash comes in a variety of shapes and colors. Your goal is to clean your planet by any means possible. It doesn’t matter to you if your neighbors end up with the pollution or you just chuck it into the sun.

You’ll accomplish this by rolling—quickly and repeatedly—three dice. One will show you the type of trash, one a number between one and three, and the third a direction (left, right, or the sun). If you have that type of trash sitting on your planet you can pass up to that number of them to the person—or to the sun—as indicated. Simple. Then roll again. Again. Again! Quicker! Oh gosh who just threw all these fish on your planet!

There are no turns to speak of. Players will continue to roll and throw trash around until one player’s planet is completely empty of any junk. That person claims a space trophy. Once you have three space trophies, you win the game!

Leave your thinking caps at home folks, Astro Trash isn’t here to make you use that brain of yours. At its most basic it’s a very chaotic, simultaneous version of LCR. You roll the dice and do what they say. To be successful, you only have to worry about two things—be lucky and be fast.

That isn’t to say it’s bad. In fact, I’ve enjoyed breaking out Astro Trash now and then. Each round lasts somewhere in the neighborhood of 2-3 minutes. Trash will be flung around. Tension mounts as you get down to the last couple of pieces of junk you have to get rid of. And those pieces are trash you are getting rid of are fantastically chunky plastic bits in vivid bright colors. It makes it very easy to identify and toss back and forth between players.

Playing a round or two is a delightful activity at a party. A nice chaotic 5 minutes to spend with the right group of people. The rules suggest playing until someone wins three times. That is definitely not necessary or even recommended. You’ll get tennis elbow trying to roll the dice that many times in half an hour. And the fun will certainly wear out it’s welcome if you get stuck playing 10 rounds in a row.

Astro Trash is a wonderfully produced box of chaos that kids, families, and anyone who isn’t taking their game night super seriously will be able to enjoy for a couple of rounds. You won’t play it for more than 10 minutes or so and probably not to the point anyone reaches the “goal,” but that isn’t really the point.

The MSRP for Astro Trash is under 20 bucks and it’s not really the type of game that gets stale after repeated plays. The tension the game creates as trash accumulates on the sun and everyone is frantically hoping to roll exactly what they need is worth the investment.

Final Score: 3.5 Stars – A fun experience for everyone that really should only be played a couple of rounds at a time.

Hits:
• Beautifully produced plastic bits make the game look and feel amazing.
• Each round lasts 2-3 minutes making it perfect for parties where people can just come and go.

Misses:
• It’s a speed game. With a lot of luck. Seeking depth, look elsewhere.
• Playing until someone gets three trophies is crazy.