We review Assassin's Creed: Brotherhood of Venice, published by Triton Noir. Based on the best-selling video game franchise, this cooperative game puts players in the shoes of assassins embarking on a campaign to stop the templars. 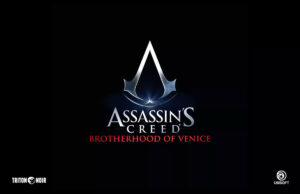 Besides a frustrating twenty keyboard turning minutes with Assassin’s Creed Brotherhood, I hadn’t played the video game series so while I was intrigued by the lavish production of Assassin’s Creed: Brotherhood of Venice, I wasn’t attached to the intellectual property. I remember the campaign and ended up not backing it only because I felt like I’m more of a kick-in-the-door type gamer than a stealthy rogue.

So is the stealthy gameplay silky smooth like Adam Sandler in You Don’t Mess with the Zohan or is it like an over-the-top 80’s action film where the bodies pile up?

Assassin’s Creed Brotherhood of Venice has an excellent tutorial system that leads you through a series of memories that slowly introduces you to how to play without having to read the whole rulebook upfront. But here’s a basic overview of how the game plays so you don’t have to make that leap of faith that the game will work for you based on the IP alone.

At the start of each turn, you draw an event card that gives an effect for the turn. Then each turn your assassin will use one of three action cubes (or four if you saved one from earlier) to move to another map square, attack, or work towards an objective.

Movement is streamlined where it’s a single action to move to a roof, climb a tower, or sneak along the streets. And, because it’s Assassin’s Creed, you can climb a tower and synchronize which often shows you the location of hidden chests or other scenario goals. And much like Monolith’s Conan and Batman Gotham City Chronicles, player actions can bounce between players—this is important as action cubes from multiple players can also be combined to complete objectives or attack enemies allowing players to converge and conquer.

When you enter a guard’s space or they enter yours you have to roll for detection before you do anything else. If you roll bad, you become exposed. So besides being as stealthy as Han Solo on Endor you also trigger the alert when exposed. More on alerts later but they’re probably worse than they sound.

If you’re incognito you can use a hidden blade to quietly dispatch guards. Or, if you really want to make your life interesting, you can use a sword or other loud weapons which will also expose you and sound an alarm. The white combat dice allow you to hit, trigger the weapon’s special ability (which also counts as a hit), or allow any surviving enemies to retaliate.

Once the bodies hit the floor, you should probably clean up the place before more guards see their buddies’ corpses. But besides tidying up the area which returns miniatures to the pool searching and hiding bodies removes the body and you get to draw an equipment card which can grant you better gear (sweet!) and/or bad cards that cause more guards to visit your square.

The enemy phase has you draw a card for reinforcements and then move all the bad guys based on what the event card says. There are two sides to reinforcement cards—one side things are nice and green and one for when the alert is triggered/active, which basically doubles the spawn rate.

The memory ends when you accomplish your mission, all of the assassins are dead, or you run out of guard miniatures to place on the board. Remember that double the spawn rate? That’s one of the problems with alerts being triggered. Also, see the giant pile of black enemy dice that came in the box and realize your three measly health cubes aren’t going to last long if everything is happening too early in the game.

Once you get through the tutorials there’s also a headquarters phase that sets up and closes out each memory and grants access to allies, a B-plot that helps advance your headquarters, healing your assassins, and crafting new equipment.

Your first experience with the game will be lower back pain if you don’t lift this heavy box with your legs. First and foremost Assassin’s Creed Brotherhood of Venice is a campaign game with some legacy-like elements, hidden boxes, and lots of envelopes keeping the game’s secrets from you. There are also three sets of stickers sheets and campaign tracker pages in the back of the campaign book where you’ll mark down experience and completed objectives but that’s about as destructive as the game gets.

One of the toughest things about describing a game full of secrets is not spoiling anything. Each assassin has their own envelope that holds character cards showing their abilities at each level, a craftable item, and the skill cards you get to choose from as they level up. There are 26 different memories listed in the experience log at the back of the book including four side quests (one for each assassin) so the base game has quite a bit of content along with a lot of high-quality miniatures.

While this game scales from one to four players (with one player playing as two assassins) the sweet spot is probably one or two players. When an assassin is injured they don’t heal between missions; you have to use actions in your HQ so you either are starting a little weaker, using an apprentice who doesn’t have any special abilities, or one of the other assassins.

And that leads me to my biggest complaint with the game. The HQ phase straddles the scenario and I think it would’ve been better to do it all before or all after that way you can set up, handle the contract (side quest), allocate your allies to their proper spots, and heal your assassins so you can play with the character you want to play with. But as a counterpoint, and why I think this is best with two players, all four assassins have been fun to play, and trying different combinations gives you a different feel and strategic options.

How’s the stealth? I haven’t played Clash of Cultures so I can’t compare. Through the first few missions there was definitely a lack of consequences to go in swords swinging. But going into Memory 0.4 (which is either the first or second to utilize the full rules) stealth started becoming critical to being successful. It’s also when I realized the event card often tells you where enemies are going allowing you to plan ahead a bit. Each square also has a limit of four enemies (or bodies with new enemies replacing bodies) giving you some reprieve for new enemies spawning or allowing you to efficiently remove multiple bodies with a single action cube.  Especially once the alert has been triggered there’s often a lot of guards.  So many guards.  Like, seriously, guards for days.

The scenario variety has been pretty good with a mix including, but not limited to, collecting objectives, assassinating someone specific, and escort missions. But there is a fairly common arc in these missions where you stay stealth without triggering the alert for as long as possible and then all hell breaks loose as you start hacking and slashing your way through the streets of Venice like the psychopaths in most adventure games.

As part of my research for this review, I put a few hours into the Assassin’s Creed II and think the concepts of synchronizing, leaps of faith, and the battle between the Templars and the Assassins all come across in the board game and make this feel like an Assassin’s Creed game. While the core gameplay mechanics are from V-Commandos (Thibaud de la Touanne,2016) this reskin mostly matches the IP with the mismatch, in my very limited time with it, is the murder happy climax of each memory as your plan falls apart and you are forced to improvise.

The core gameplay is slick (dare I say, Silky Smooth). It reminds me of Cthulhu Death May Die in that it’s streamlined and cinematic. Extra hits can roll over to the next minion and you can parkour to the rooftops just as easily as taking a stroll to the next street tile. They didn’t bog the game down in hundreds of little rules and exceptions to those rules and then drown you in status and effect tokens [gives a look at Swords & Sorcery].

In terms of replay value—each assassin has three skill cards to choose from at each level and there are two choices for your HQ and allies. Each time you play a scenario the event cards will come out in a different order. And luck, both in die rolling and event drawing, can make a memory easier or harder. So while the main story won’t be a shocker, someone who loves this game will probably get enjoyment out of multiple campaigns.

The slow development of the story with short vignettes is enticing and each envelope is like a micro-expansion that teases the possibility of something new to explore or learn. While the narrative has been interesting it’s unlocking the secrets in the game that has me the most invested. And on the gameplay front, the memories play quickly with expertly streamlined gameplay that keeps the action moving along making it all too easy to say just one more memory before I pack this up.

Hits:
• Streamlined gameplay that keeps the action moving
• Great variety in scenarios
• Captures the essence of the IP

Misses:
• You may not get to use your favorite assassin due to injury
• Too. Many. Guards.
• Resetting this game to start over will be time-consuming