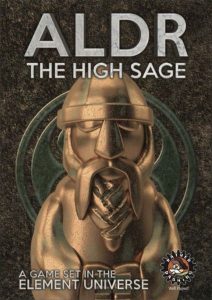 One of my favorite game categories is abstract strategy games. Like trick-taking games, I’m almost always willing to give abstract games a spin. So when Tony sent me Aldr: The High Sage to review, I was a little unsure. Call me shallow, but I judged this game by its cover and wasn’t really psyched or drawn in. But most games deserve a fair shake.

Aldr: The High Sage is an abstract strategy game for 2-4 players that takes about 30 minutes to play.

The goal of Aldr is to be the first to form four patterns, each one being unique to the particular elemental type. This gets done by playing cards from one’s hand into the collectively-formed center of the table. The strategy lies in keeping your opponent from forming their patterns. You do this by using the Aldr token to cover up a single space or cover up spaces using your cards. But players won’t be able to willy nilly lay cards on top of others. Each element replaces another particular element. For example, water can cover up fire spaces.

Each turn, players will play two cards, always having five to pick from their hands. Then, they’ll place any tokens to indicate they’ve created one of their patterns. This not only indicates to everyone else a player’s progress, but also removes one of those spaces used to create the pattern from being used by anyone else later. A player will now place the Aldr token on any elemental space and draw back up to five from the four publicly-available cards. Turns continue like this until a winner shows they can control all the elements, or form each elemental pattern.

Like I mentioned before, I was not immediately drawn into playing this game. The drab, muted art and color palette was not one that had me interested. I’d guess most people would gloss over it if they saw it in a store. But ugly games can still be enjoyable. This one was alright. I liked how the game forced you to think about how certain elements could cover up others. In the beginning, this isn’t as exciting or interesting. But when you collectively build out the center and more cards get played, there is some satisfaction in being able to cover up two elements with one card, giving you an almost Tetris-like satisfaction for finding just the right spot. In that way, this game did well with strategy.

Building out multiple patterns will be important because you’ll never be able to just focus on one. You won’t want to. You will however need to keep track of how close patterns are to completion. Since everyone will be contributing and working on different patterns, this can really bring out the AP in folks. How close is a pattern to completion? Can I do that on my turn? Can I snipe them by covering up a square? Is so-and-so trying to score something and should I keep them from doing that, thereby dragging the game out more?

Couple all these thoughts I had with the Aldr piece, which you’ll use to block people from using a square to score each turn and you get a really bogged down experience. Don’t get me wrong, abstract strategy games should bring out some thought and contemplation in turns. That’s one of the biggest reasons why I like abstract strategy. But if a game leads to a constant battle of beating each other back, the strategy almost takes a back seat to the sniping that’s to ensue. The best way I can probably convey how this game made me feel is to compare it to Munchkin, specifically how it feels to be at level 9. Everyone knows you’re one level away. So what happens? Dogpile. Expect the same thing to happen to you here.

There are some positive notes about the game. I appreciated the layout of the rulebook and learning the game is pretty straightforward. They provided some pictured examples to help explain concepts such as card placement. Having written explicitly in the rulebook what elements could cover up what was helpful. I glossed over that on my first game, paying attention only to one of my components that showed a cycle on it. Looking at only this, I thought that elements could cover up two elemental types, not just the one. #themoreyouknow

Abstract games tend to be easy to learn, but hard to master. Generally, I’ve had some very satisfying experiences, especially with abstracts. Once I got past the ugly art, I thought this was going to give one of those experiences. Aldr: The High Sage has all the pieces in place for it to be there. But there was something about those opportunities to knock out your opponent’s strategy that just left a bad taste. If a game is going to lead to opportunities to pile on opponents, I don’t see this as strategic. I see it dragging out a gaming experience I don’t want to play again. This may not happen quite so much at 2 players, but beyond that, players beware.

Final Score: 3 Stars – An abstract strategy game that can devolve into backstabbing.

Hits:
• Easy to learn
• Good rulebook layout
• Can be satisfying when your strategy works out

Misses:
• Cover, art, and color scheme are boring
• Strategy can be overtaken by sniping
• Higher player count risks dragging out the game more and bringing out more backstabbing 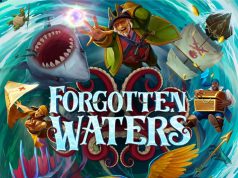 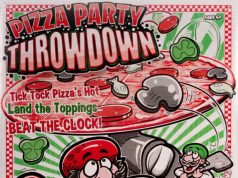 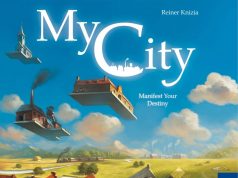