We review 1972 The Lost Phantom, a print and play board game designed by Mike Heim. This roll and write board game is based on the true story of USMC Captain John W. Consolvo. 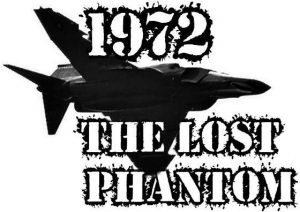 We are currently living in the strangest time of our lives. Without going into the details that everyone knows, it’s also impacted the lives of gamers. All gaming has shifted to an online medium and game nights are currently a myth. It’s caused me to adjust my review schedule as well. After making the adult purchase of a quality printer, I stumbled upon the BoardGameGeek Print and Play Games News thread, and boy howdy what a thread it is! Just off an initial look, I jotted down ten games to print up and try. And with my wife being all gamed out for a few weeks, I figured that a solo game would be the best place to start.

In the thread, I found a series of games called the XX72 solitaire games from Mike Heim. These are hex-based games on a single sheet of paper, each one portraying a different century, story, and setting. I started with the most modern of the settings, 1972: The Lost Phantom. Based on the true story of USMC Captain John W. Consolvo, The Lost Phantom sees a US soldier in Vietnam shot down near the demilitarized zone. You have ejected, landing deep in the jungle, and now must head east to the Song Thach Han River, evading Viet Cong soldiers, fight against the brutalities of nature, and manage your injuries.

1972: The Lost Phantom requires a low number of components that you have to provide. You must print out the map sheet, the five pages of rules, and scavenge about for: two different colored writing utensils, nine dice with one being a darker color than the others, and a pad of lined paper (this last one is optional, but helps build the story and theme).

A turn takes place in seven simple phases, generally all revolving around rolling the dice. One die is rolled, and depending on the result, the hexes around your current location are explored (by you drawing the terrain in the hexes). Then two dice are rolled using the darker die and another. Those results will offer a potential event that could offer a benefit or injury to our lead soldier. Then with the remaining dice, they are used to move, stay stealthy, and rest. Your current endurance is the number of dice that will be allocated.

Then, starting with move, the dice are rolled and one is kept. The kept die must be greater than or equal what is listed on the terrain chart. If it is, you scamper to an adjacent hex. If failed, then you sit tight. You then do the same thing for stealth and rest checks. If you fail the stealth check, you lose a proximity (a second health bar representing the Viet Cong in pursuit of you). If you fail a rest check, you lose an endurance, meaning less dice can be allocated to taking these three actions.

The final phase uses the optional lined paper I mentioned above. After the round ends, you recap what happened on the lined paper as if it was the soldier’s journal. This can be one or two sentences, or even a lengthy paragraph, which I did once or twice in my plays. The writing may seem like an odd thing to include, but it does wonders for personifying what is essentially a line on a hex grid. The phases repeat until the soldier is captured, dies, or escapes across the river (or maybe other ways using equipment). If the player wins the game, they are then given a score: one point per remaining stat they have on the three dice that track them and one point per mapped hex, giving 1972 a max score possibility of 98 points.

In many ways, 1972: The Lost Phantom plays out similar to other solitaire games, like Deep Space D6 as an example. It uses dice as a resource to allocate in the best ways to handle the terrain and your current stats. That part really isn’t the most innovative. And neither are the encounters. Yes, it uses a clean system and provides some fun instances, slightly reminiscent of story-based games like Tales of the Arabian Nights. But it’s really just rolling two dice and something could happen.

Building the map is one of the more unique parts. It’s going to provide different terrain to traverse each play, and some of them like villages or fields can be a little more rare. Sometimes events can build the map as well, which is fun when it happens. Not only are you attempting to balance the use of terrain for protection and ease of resting, you also are incentivized to explore more of the 80 possible hexes for a higher score, however that may not be the most thematically correct design choice. But instead of doing the win/lose model of a solo game, 1972 ops to go with a “win/lose and how much did you win by” model that offers a goal for completionists.

Where the game comes together is through the journaling phase. The rules give an example of what that could look like, but combining that with the traversing of terrain, taking of damage, current statistics, random events, and Vietnam War theme creates endless opportunities. Here is an example of one of my favorite journal entries I conjured up after an event and entering my first village:

“Mortar fire. It’s the nightmare of Vietnam. And instead of following what our officers preached, I book it. They told us time after time, ‘find cover.’ We did exercise after exercise to find cover. Ten days off the grid and I’m abandoning my training. Now I’m hurting, so much so I don’t speak to a single person in the first group of people I have found in over a week. Maybe they didn’t want to speak to me at all. I was too pained to perceive their emotions.”

Without introducing these elements, The Lost Phantom would fall into the same fate as many other solo-only games that become an exercise to pass the time. And if you choose to pass on the journal writing at the end of each round, you’ll find that 1972 can be an exercise. Granted, it provides more variability than other “exercises” with random events that have multiple choices, six different afflictions one can suffer through, and an inventory to help your journey. But without the layers of paint, it’s rolling dice and managing health bars.

1972: The Lost Phantom does a lot with just some sheets of paper. While the majority of the game is just a black and white map with a few charts, the theme is helped through the player’s will to journal in character. The story is different each game due to the circumstances the player stumbles into. With the majority of the game being built around dice rolls, the game can feel quite lucky (or unlucky for that matter). But it still makes for a fun and tense solo game.

Final Score: 3.5 Stars – While just a solitaire exercise in terms of mechanics, the story 1972: The Lost Phantom tells using hexes and a journal makes for a good thematic experience.

Misses:
• Journaling may not be for everyone
• Without journaling, it becomes more of an exercise with low thematic connection
• Majority of mechanics do not offer any innovation
• Scoring has no connection to escaping goal